Hyundai Elantra or Lantra at the begging has been with us from 90’s. It was viewed mainly as cheap and reliable small sedan capable of fulfilling a role of a family car. Since Hyundai’s path to success constantly went upwards, the way of thinking trailed along also. In 2010 Elantra came with appearance influenced by Fluidic Sculpture design, and it became handsome for the first time.

This was enough, among else, for it to win North American Car of the Year title at the 2012 Detroit Auto Show, South African Car of the Year for the same year and finally Philippine Car of the Year. Latest generation was introduced in 2016, and with progressive thinking from Koreans, we have the honor to meet special version, 2017 Hyundai Elantra Sport.

For the generation in question, the influence of Scheyer’s Germanic roots is clearly visible, as vehicle overwhelmingly resembles Audi’s A3 sedan, starting from the grille. Flowing lines of predecessor are exchanged for strong and sharp ones, and all the cuteness is gone, while car radiance more self-competence and seriousness.

Elantra Sport is poised to add extra sportiness to the mixture, and it does it right, with a quite aggressive front bumper, LED daylights, black circled grille, revised rear bumper with diffuser and dual exhaust pipes and finally turbo badge on the grille just to remind if you haven’t noticed mentioned changes. In the end, it offers sportier looks, but it didn’t go crazy as Focus ST or Subaru WRX STI, it is more as tamed aggressiveness in resemblance to Golf GTI.

The cabin is furnished with some special details so you can set it apart from the regular model. To add a dash of sportiness Hyundai fitted leather sports seats with energetic red stitching, flat-bottom steering wheel, sporty gauge cluster, alloy coated foot pedals with rubber inserts and every surfaces or button is pretty much blacked out emphasizing mentioned stitching. Beside this, count on high equipment level as you get a 7-inch center dash touch-screen display, a choice of Apple Car Play or Android Auto and Hyundai audio system.

Sport version weighs 150 pounds more than regular, but don’t let that scare you as it gains 54 more horsepower from 1.6-liter turbo powered petrol engine paired with 6-speed manual or 7-speed dual-clutch automatic, now producing 200 hp and 190lb ft of torque. If you prefer driving experience, and you do as long as you are reading this, go for the manual, because it won’t be hard for you to outperform rather lazy shifting from automatic, which is besides more expensive option. 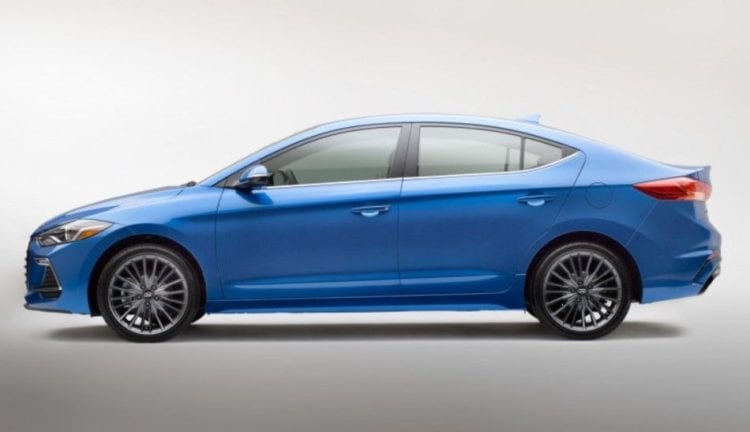 Compared to regular model, chassis is stiffer, multilink suspension replaced torsion beam at the rear, and brake rotors grew. So, Elantra is spirited while cornering, brakes do their job properly and it assures confidence with a top speed of more than 130 mph. On the downside, the engine is quite phlegmatic under 4000 rpm, and you’ll have to work a little bit harder to extract proper punch from it. Another thing that we would expect from sportier version is the sound from the exhaust, but the noise it makes is not so representative.

Hyundai always offers good value, and there is no reason for us to see a different case here. It starts from $22,000 in the US, and you can opt for $2,400 Premium package bringing an 8-inch center screen with navigation, Hyundai’s Blue Link connectivity, 8-speaker Infinity premium audio system and power tilt-slide sunroof. Besides that it offers lots of safety gadgets such as rear cross traffic alert, blind spot monitor, lane departure warning with lane departure correction.

2017 Hyundai Elantra Sport is not full blown hot hatch, and it doesn’t pretend to be one. Focus ST, Golf GTI starts from $3k more and asks much more for optional equipment, also while offering seriously better performance.

This model is a step between the family hatch and hot hatch, and it will probably draw buyers looking for sporty thrills but still keeping family and budget in first place. In the end, it is enough to keep us occupied until anticipated N series arrives.