The 2017 Honda CR-V is the first model in the fifth generation, and as one of the most important models in Japanese car makers lineup, they can’t afford to make any mistakes with it. Images clearly show that there will be no revolutionary upgrades and improvements and this is completely understandable as Honda does not need to change winning recipe.

If we take a look at the sale numbers, we can immediately notice that this is the second best-selling vehicle right after Civic. From 1997, when it was first introduced, CR-V was delivered in more than 4 million units putting it pretty much in line with Civic and Honda Accord. 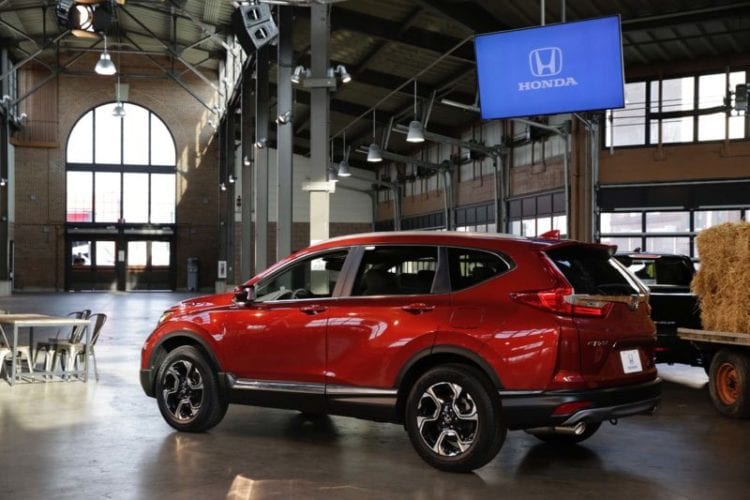 Like with previous generations this one will also employ proven tactics to boost sales. One of the segments benchmark vehicles will offer slightly upgraded design, better tech features, additional interior space and more safety options. Few important bits and pieces we see here are obviously taken from Civic, but we really don’t mind this as we have distinctively different vehicle.

Civic’s platform is underpinning everything here, and it now comes with 1.6-inch longer wheelbase and has grown 1.2 inches overall in length. Both height and width measures are up for about 1.4 inches. The result of this can be seen in the interior where we have a slightly more space and in the trunk that now offers 39.2 cubic feet, about two cu ft. more than before. This is far from everything that has been done inside as this vehicle comes with two displays, one behind the steering wheel for delivering information’s to the driver while the second one is the 7-inch touchscreen in the middle of the dashboard and comes equipped with Garmin navigation.

Among the advanced features in 2017 Honda CR-V, you can count on getting Android Auto and Apple CarPlay that both come with voice activation and work on par with the audio system. Furthermore, things like USB charging ports, remote start, electric parking break and dual-zone climate controls are all part of the standard equipment.

Another big change for the fifth-generation and 2017 Honda CR-V is the introduction of the all-new engine in the lineup. The 1.5-liter I4 turbo unit has been already seen in Honda Civic, and it is capable of producing 190 hp and 179 pound-feet of torque. Since CR-V is not a huge vehicle and when we factor in that max torque of this engine is available from 2,000 to 5,000 rpm we are getting clear insight why this is one of the best choices. Another option here is the 2.4-liter naturally aspirated engine with 184 hp and 180 lb-ft of torque and we strongly recommend you to try out both and see what smaller turbo unit can offer. 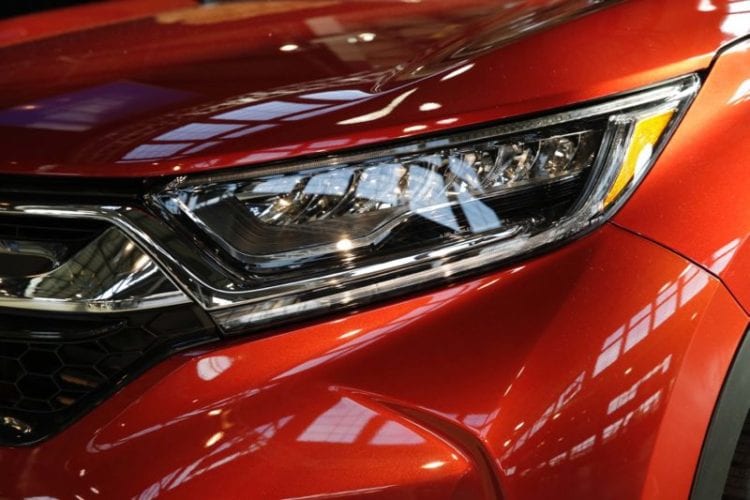 For 2016 model power goes through a CVT and 26/33 mpg is the result you can see from the larger engine when it is paired with the front wheel drive system. If you add AWD option figures drop to 25/31 mpg. Slightly lighter vehicle for 2017 and few additional tweaks will certainly influence these results in a good way. Also, it will be interesting to see how much improvement will the turbo unit bring.

The overall shape has been retained, and we do have that distinct CR-V looks. Slightly more aggressive stance has been achieved with a longer hood and fenders that are now more flared. On top of that, we are getting LED daytime running lights in combination with chrome rich grille. If you choose one of higher trims LED headlights will also be added as standard.

Since every EX and above trim will get Honda’s Sensing set of options we are glad to say that most vehicles will be offered with this package. This system includes adaptive cruise control, road departure monitoring, lane-keeping assist, collision mitigation braking while you can also get rear-cross traffic alert, blind spot monitor, and automatic high-beam headlights. 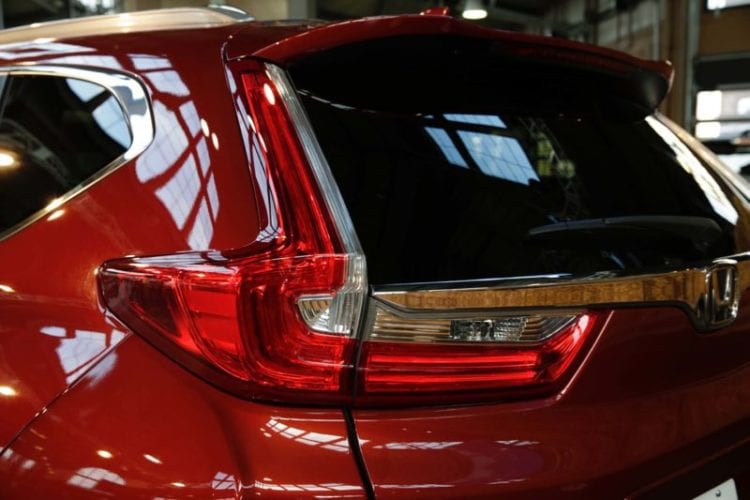 With upgraded features, better looks, new engine, more space and new tech inside and out, we expect to see even better sale results for the 2018 Honda CR-V than before.

Competitors from Toyota, Nissan, Ford, Hyundai, Mazda, Subaru and others will have a hard time winning this battle, but we will see how will it go.

One of the deciding factors could be the price that is currently not known but looking at the previous generation tag and rivals we think that it will not jump significantly higher. Expect something in the line of $25,000 for the base version.

The current 2016 Honda CR-V is the fourth iteration of Honda’s best-selling crossover and one of their best-selling cars overall. While it may not look incredibly well for some people and while the materials inside the cabin may be average at best, the CR-V remains one of the best five-seat crossovers money can buy. It is cheap, well equipped and it has been offering one of the best fuel consumption ratings in its class for years.

However, because it had been released back in 2011, the model is getting dated so naturally rumors started to appear about a fifth generation that could be released with the 2017 Honda CR-V. We only have quite limited information’s about one of the most popular compact SUV’s on the market, but we will share everything right here.

So far they haven’t said anything official about the new model, but we know it is under development and the rumors which suggested that it might be released by the end of the year could prove to be true. Not long ago a model looking nearly completed has been spied testing with heavy camouflage on it and with a lot of design elements left uncovered or covered with really revealing tape indicating new gen version is coming. 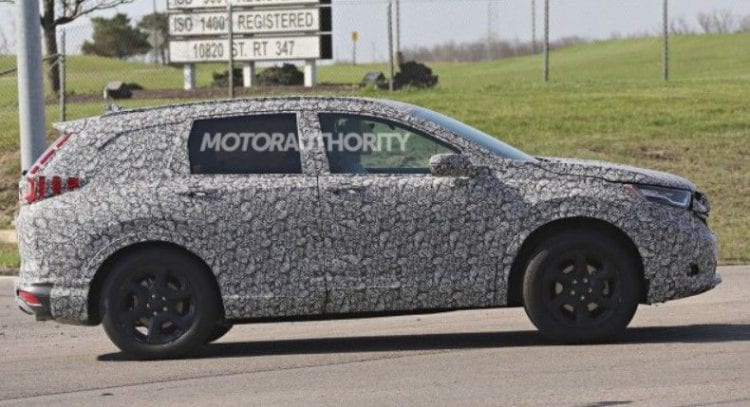 The price is another segment about which we do not have any details. Still unknown, but our best bet would be that the new CR-V will be offered, at least on the US market, for roughly $24,500, right in the middle of its class. This also means that the price will go up for almost $1,000 which fits perfectly into our expectations.

For the price expect a better car than before which will very likely come equipped with more features and better safety equipment as well. Among other things we know that it will get a much better chassis, thanks to the fact it will be based on Honda’s new modular platform, basically being the first car to use it. This will likely allow them to improve the NVH levels and on top of that, it means that Honda is now going to build a slightly larger CR-V. 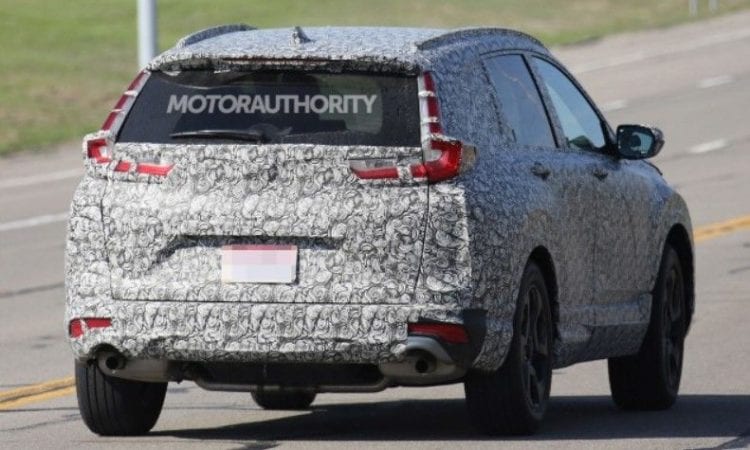 There is still no word on the rumors of it being available with seven seats but considering the Tiguan now comes with such a version, the Honda CR-V might be the one following its footsteps.

Unlike the current model which comes equipped with a single engine choice in the US or two in other markets, the future 2017 Honda CR-V is going to be offered with at least two options in each market which will give people a lot more versatility. The base model is now expected to use a new Honda 1.5 liter turbocharged inline four mill offering up to 160 horsepower and around 170 lb-ft of torque.

This will be a similar engine to the older 2.4-liter unit that is going to be dropped from the lineup. Seven seat version might receive Honda’s new 2.0 liter turbocharged mill which could easily offer more than 200 horsepower and 200 lb-ft of torque making it decently fast and agile. 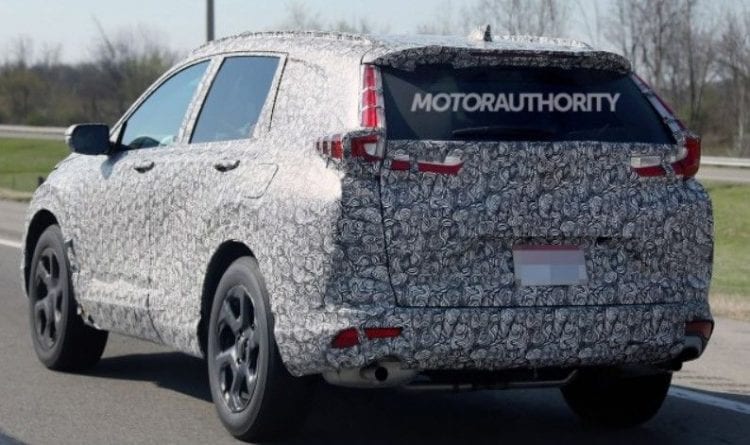