Civic has been a pretty usual choice for kids with tuning aspirations. Honda S2000 was too much expensive, let alone old NSX, and used Civic offered good ground for endless fiddling with performance parts, many times making it worse than before. Type R model has always been an object of desire, and it was decent hot hatch from beginning. While new Civic has just arrived and type R is around the corner, we will try to focus on the middle or to be more precise, on the new 2017 Honda Civic Si offered in both coupe and sedan form. 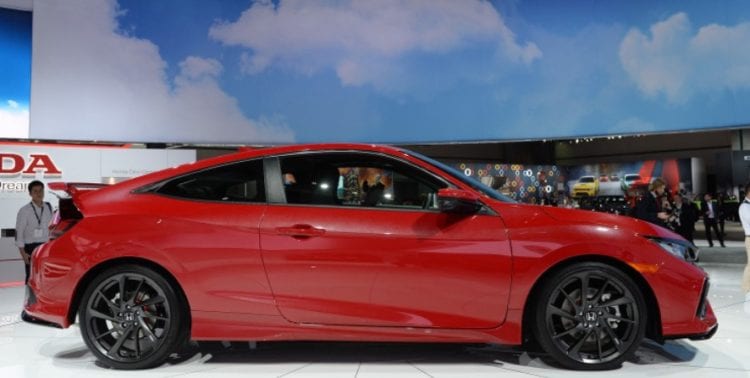 Well, Honda hasn’t spared touch of craziness when giving us Civics in hot forms. Regular new Civic is everything but ordinary, and Type R will look just bonkers as you’ll have to stare at the picture for two hours to just partially comprehend what goes where. 2017 Honda Civic Si will fit in between, and for me, it looks best. It comes as a regular model receiving hot hatch transformation, while Type R looks as injected with horse steroids.

It has enough novelties to make it distinctive as unique front grille has gloss black finish and intakes has grown in a substantial manner. At the rear, noticeable spoiler with oval and centered pipe exhaust just gives promise of good fun.

As we are used to with Honda, lots of redness is to be expected. The doors, steering wheel and seats all get the red stitching treatment, while floor mats and instrument cluster received full red coloring. Just not to let everything ends on red, shift nob and pedals are aluminum and dash has places coated in carbon.

Nothing is official yet, but we know that it will be powered by 1.5-liter, direct injection, turbocharged, a four-cylinder unit that is mated to a short-shifting, six-speed manual transmission. Yes, you read it correctly, Honda didn’t go for naturally aspirated as usual, and yet we have the power of turbos now. So forget about big revs, but expect kick from the start.

In the regular model, the same engine produces 174 hp, and we can be sure that it will be forced to much more, probably around 235 hp, as previous Type R comes with 306 hp and a new one should provide up to 340 hp. If we try to predict 0 to 60 time, we would say it will fit close six seconds margin with the top speed of around 150 mph. 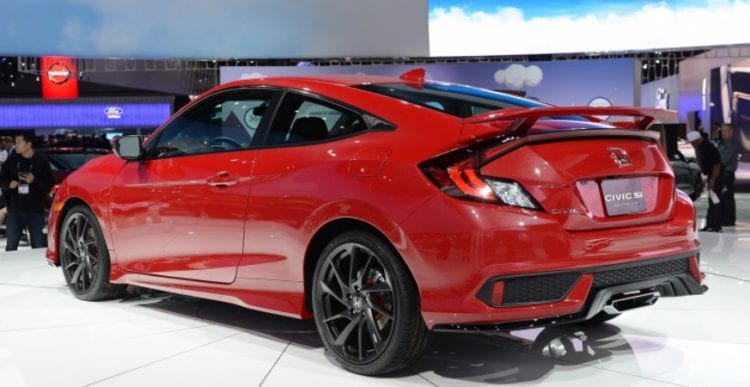 Regular Civic starts from slightly under $19,000 while Type R could reach from $32,000 to $36,000 when converted from GBP, so we have to slot Si in between and predict it will be offered at $29,000. The exact price is yet to be announced by the Japanese automaker.

When we try to take a look at rivals, it assures us that it could be on the poster in boy’s room, while competitors like Focus and especially Golf hasn’t come that far in styling, for now. For all tuning lovers, there is nothing to tune, as everything is just madly balanced, and if you are total anarchist go for R type.

Nice cabin, good price, and Honda’s reliability make this guy quite an offer. Just one problem, you’ll have to wait almost a year to get it.