The current version of the Accord has been released back in 2012, and it received a large update in 2016 as well as a new model for the 2017 car. However, the 2017 Honda Accord is also rumored to spawn not only the new hybrid but also a high-performance model which would likely be very well received considering that its class is currently missing such a model, and the only real choice is the new Fusion Sport.

In order to compete with the Fusion Sport, it seems that Honda is planning to release a new version of the Accord, most likely called the Type R or something along those lines. Currently, this sporty version of the sedan has been mentioned only in rumors, but it is clear that Japanese car maker could see a lot of benefits by delivering one vehicle like this.

This new model would still be using the same front-wheel drive platform as the regular car, but if Accord wants to compete with the Fusion Sport and its other competitors, the car will get a reworked running gear. Honda wouldn’t stop there with adding a lot of upgrades inside the cabin as well as an entirely new engine and transmission which are going to make it quite fun to drive. The release date for this car is still unknown as it’s only a rumor at this point.

However, the introduction should happen during next few months and before the fall of this year. The price might hover around $35,000 where most of its direct competitors are.

In order to be able to face those 300 horsepower machines, the upcoming Accord Type R or Sport is likely going to make use of an entirely new engine for the car and Honda as well. This could be a new generation 2.0-liter, or 2.4-liter turbocharged inline-four petrol engine equipped with VTEC, so it should be able to break the 300 horsepower barrier with ease. Thankfully to optimized maps, turbocharger, and VTEC system it also should be able to provide more than 300 lb-ft of torque. While this doesn’t seem that impressive for this day and age, the car will be around 3,200 pounds heavy, so lighter than its competitors and the light engine and rather a light transmission will assure great driving experience. 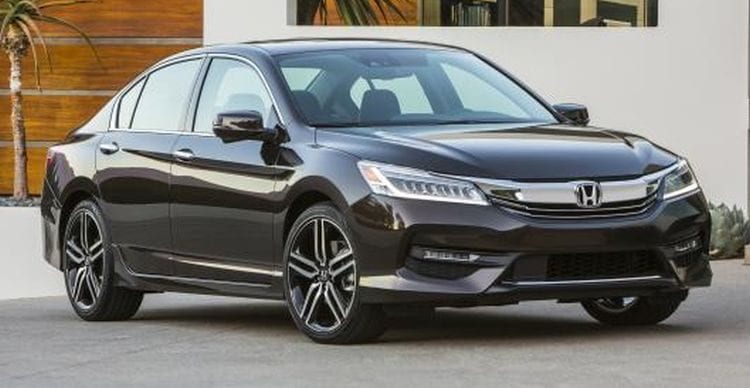 Some rumors also suggest that Honda wants to get back to basics with the 2017 Honda Accord, which could mean that the mid-size sedan will only be offered as a front wheel drive car with a six-speed manual gearbox. This would be great combination considering that there simply aren’t any other cars in its class to use this combination which is really sad. To benefit from all this power, the upcoming Accord will likely feature a lower suspension system, bigger brakes and wheels while inside the cabin we should see sports seats and nicer materials than usual such as Alcantara and aluminum.

Disclaimer: Images are of the 2016 model on which Type R version will be based. We expect to see small changes, mostly related to more aggressive body parts.