Ford F series is definitely most popular pickup truck in the world, and one of the proofs for that are its sales that once almost reached million annually. It is chosen by buyers both for hard-core work and as a luxury vehicle in high trims. Ford had an another idea and introduced Raptor version with the previous generation, which is actually far from sports car despite huge power increase, it is still a truck, but maybe something in resemblance to a rally car.

Big hp boost was followed by a huge capabilities boost and the price almost doubled. But what if even that is not enough? Then Hennessy comes and takes matters in their hands. It already did it with previous F series, and it will do it again as we got renderings of 2017 Hennessey VelociRaptor 6X6.

Hennessy often stay by its words and despite that future beast is still in development we can look at these pictures with some certainty. The whole car is reworked visually, and while Raptor brought “bad boy” appearance, this is just menacing. It looks like as the car has started transforming into the armored fighting vehicle and stopped somewhere along the way. Just by looking at this machine, you get a sense that it can run through the house without making a dent on its metal body.

By the way, the Velociraptor was ancient ruthless predator and name perfectly fit this vehicle, although as far dinosaurs go, it was smaller than human in size, so Hennessy should opt for T-Rex designation as this thing is huge. You read the title correctly, as 6×6 points to another axle and additional two wheels, just so if you are not happy with so little as four. 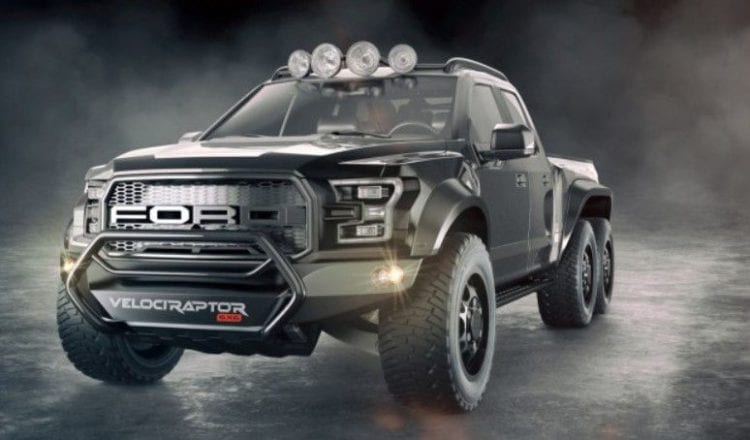 No photos of it yet, but Hennessy promised “bespoke,” and who are we to doubt. One thing that you can definitely count on is it will be packed with all things available from F series, so you’ll get the console-mounted shifter, auxiliary switches, unique seats with the Raptor logo, SYNC3 infotainment system, big TFT display in the gauge cluster, and huge paddle shifters on the steering wheel. Plus be sure to expect something more in same menacing manner.

Raptor comes with Ford’s new 3.5-liter EcoBoost V-6, capable of respectable 450 horsepower and 510 pound-feet of torque, paired together with 10-speed automatic transmission. All in all, mighty. But Hennessy guys just glimpse at it with irrelevance in their eyes and stated that it could do more, much more. So, if anyone isn’t satisfied with just menacing looks, feel free to transfer that menace under the hood and get yourself VelociRaptor 600 Twin Turbo kit which boosts power levels to the 600-horse mark.

This is made possible by an upgraded pair of turbochargers, stainless steel exhaust “modifications,” air-to-air intercooler, and a retuned ECU. Another option would be upgraded Brembo front and rear brakes, larger wheels and tires, and the LED lighting system. If you thought that size of suspension on Raptor cannot go any further, feel free to acknowledge that larger Fox Racing shocks are scheduled for providing extra damping.

Also if you have troubling thoughts that world had become a hostile environment, feel free to transform this truck to the nuclear bunker on wheels as armoring systems are on the options list among else. 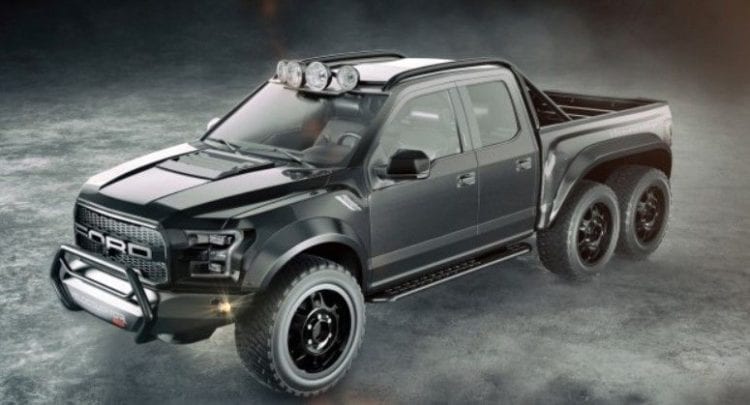 If you thought that everything stated above is cool, this is surely not. 2017 Hennessey VelociRaptor 6X6 costs $295,000, and extra horsepower asks for $22,500. It may sound outrages to cash out Rolls Royce money for Ford’s pickup truck, but the only competitor would be Mercedes G63 AMG 6×6, and that one comes with price tag of $625,000.

In the end, it is not about the price, this thing looks so crazy, that no lower price will attract anybody with reason to buy it, same as no high price is going to deter somebody in love in it to move along.