Rebadging between Chevrolet and GMC has become one of the most usual things in the automotive world. While Chevy has a quite extended model offer, GMC almost completely fell under the trend of replacing badges and just placing its brand’s grille. The same story counts for a truck lineup, consisting of full-size Sierra and mid-size Canyon, acting as nothing more than differently “grill-ed” Silverado and Colorado.

Then came world economic crisis in 2008 and GM declared bankruptcy, to which led many reasons, obvious one of them would be an irrational offer of basically two same models within the same class. GM had to change the tune, so the latest generation of Canyon has it own and unique fascia, although it didn’t go further in the case of an interior, but just as new GMC Terrain finally got its own compared to new Chevy Equinox, trucks will also get there eventually. After three years on the market, we are about to see whether 2017 GMC Canyon is still a viable offer. 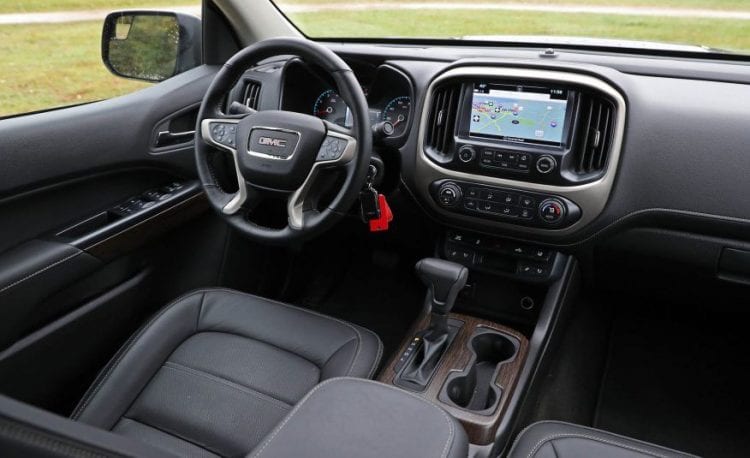 As we said, finally, Canyon is more than just different grille and badge. It is definitely manliest truck in the segment. It is more angular than Colorado, with bigger and more imposing grille, appearing as more rugged and more serious than it. There is hardly much to be said about rear end design of these pickup trucks, but we should give a point here for GMC as it went so far to change the configuration of tail lights for Canyon. It is a trivial thing visually, but the big one in GMC’s effort to build its own personality.

As it was said, GM hasn’t followed through with interior yet, so we have Colorado’s one, while only difference is the steering wheel. Overall cabin in question is quite a decent one, bringing parts of the luxury world to the trucks, that was unthinkable some time ago. It is not as refined as one in Honda Ridgeline, but it is questionable should we consider that as truck anyway, with its unibody chassis and independent suspension.

Space related numbers are solid, but if you wish to transport more people avoid extended cab as crew cab is minimum requirements for any longer journey. 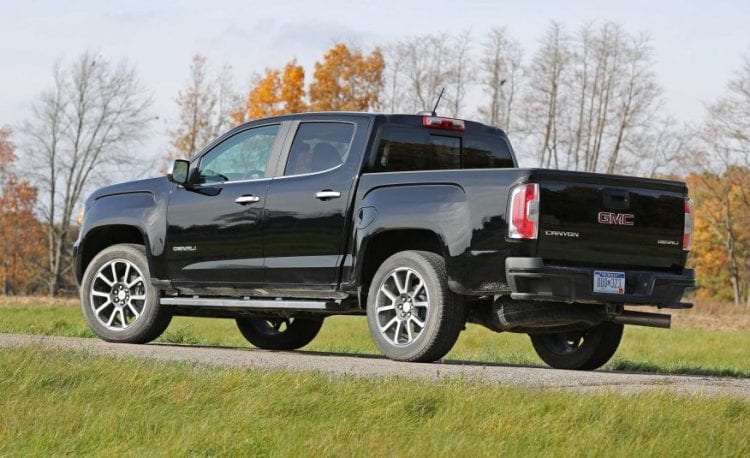 Automotive trends have clearly no boundaries as they reach all corners, entering even most conservative parts such as the truck world. GMC is no exception to that, so the base offer is four cylinder 2.5-liter petrol engine producing 200 horsepower and 191 pound-feet of torque. It is paired with a 6-speed manual, and it is capable of nice accelerations, despite you expected better numbers.

Defending traditional values is the new V6 with 308 hp and 275 lb-ft of torque which is slightly more powerful than the outgoing same sized 3.6-liter unit. It is paired to 8-speed automatic, and it features cylinder deactivation technology, shutting two cylinders if necessary, but even with that fuel efficiency is at 20 mpg combined.

Biggest trend follower would be new 2.8-liter turbodiesel inline-4 engine. Sticking to four cylinder configuration with a big number of ccs is unusual and definitely taking some space under the hood, but never mind as the powerplant in question has decent specs. It delivers 181 hp and 369 lb-ft of torque making torque figures much higher than those of V6. A large amount of torque is the biggest object of desire with trucks, and also nobody would mourn over 25 mpg combined.

Towing capacity for V6 is decent 7,000 pounds, while diesel option takes it even further with remarkable 7,700 pounds. Payload capacity is between 1,450 to 1,620 pounds while higher number almost touches bigger Sierra starting payload offer. Canyon comes as a rear-wheel drive or 4WD with the auto mode or selector where the driver picks desired power layout, including locking differentials.

Despite being a pickup, Canyon is satisfyingly comfortable on the road, steering is properly weighted, and handling is quite surprising in a positive manner.

2017 GMC Canyon follows the story from the introduction in 2014 but with additional engine choices. Path of visual separation from Chevy has started, and it is more than welcomed. It’s GMC, and it’s truck, so you won’t find anything missing on paper, and it’s also hard that you are going to strongly object anything while using it.

This is complete offer and thing that set it apart from rivals is exposed masculinity, and where else should you look for it, if not in pickups.