Ever since the introduction of the Canyon pick-up truck from the side of GMC, rumors have been circling that they would eventually introduce a Denali trim to it. Even GMC’s very own vice president was quoted stating he would like for a Denali trim to be added to the Canyon lineup. That has finally happened, and now we can present you with 2017 GMC Canyon Denali.
When you think about it, it makes absolute sense. Every other model from the company has the Denali trim (obviously except the Savanna van), so why shouldn’t the Canyon get it. The Denali trim, for those that don’t know, is GMC’s top of the line, most luxurious trim you’re able to get on any one of their vehicles, bar the special editions of course.
In most models you get special distinctive exterior with unique styling, some changes to the interior and most important of all, a few extra toys to play with. And it’s not like this is just for a few chosen people. No, because according to GMC’s statistics one in every four vehicles bought is a Denali trim. This doesn’t just make it extremely popular, but perhaps their bestselling trim. About 25 percent of all sales are a Denali, not exactly a little is it?

Contrary to popular belief, the wait wasn’t that long as some people claimed. GMC unveiled the luxury Denali model at the LA Auto Show in 2015. Just like we expected, it came loaded with lots of toys and gadgets over the standard Canyon. What’s more, it’s not like you could have opted for those things on the lower trims. Oh no, the features here are exclusive to the Denali trim. That’s right; you won’t see any of the new features on lower models, making the Denali all that more wanted and more special. 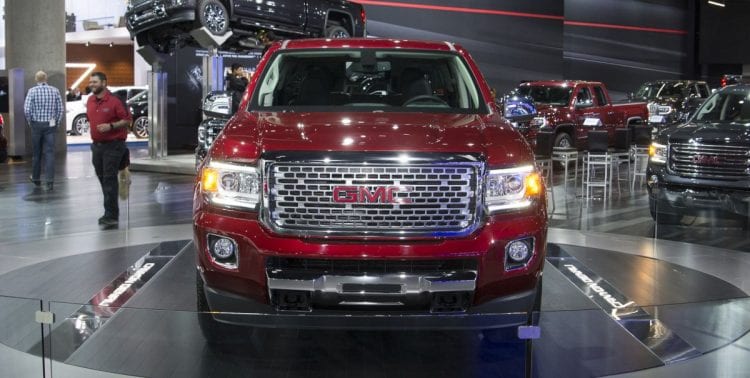 The exterior upgrades are probably most noticeable with the Denali trim. The most obvious improvements are here, so that’s why we’re going to start off with it. First of all, the very bright mesh grille is immediately striking. It’s juxtaposed to the GMC lettering in, obviously, red. We are getting HID headlights which have LED running lights for the daytime, but that’s not saying much since the standard Canyon already has set of those. 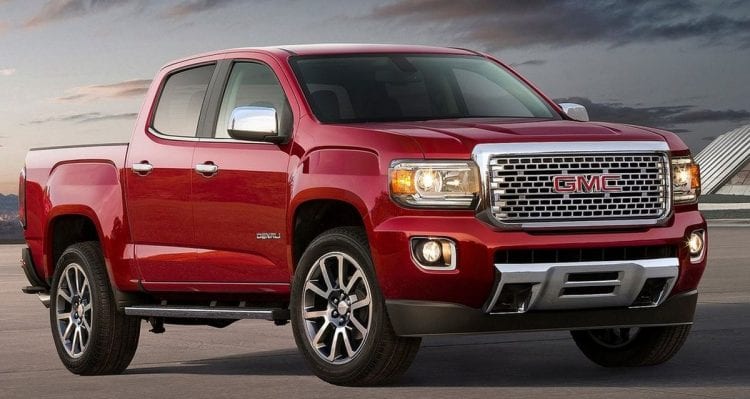 New are the fog lights, the tow hooks, a spray-in bed liner and the mandatory accents for the door handles, the bumpers, and the side steps. It’s not a revolution, but rather an evolution. You can instantly recognize it as a model delivered by GMC, or a Canyon more to the point, but you can tell it’s not your average trim.
The chrome accents are matched with the new 20-inch wheels which are even better looking. These are aluminum machined wheels specially made for this GMC and have a super bright look to them. It’s nothing less than what we’ve come to expect from GMC for their Denali trims.

The body, however, is largely the same with no significant changes, which is a good thing. The panels are the same, and so are most of the crucial areas. It’s got the same towing, hauling and driving capabilities as before with the added “bling” of course. There are six color options to choose from, but when it comes to body styles you can get it only in Crew Cab form so be wary of that before buying it. 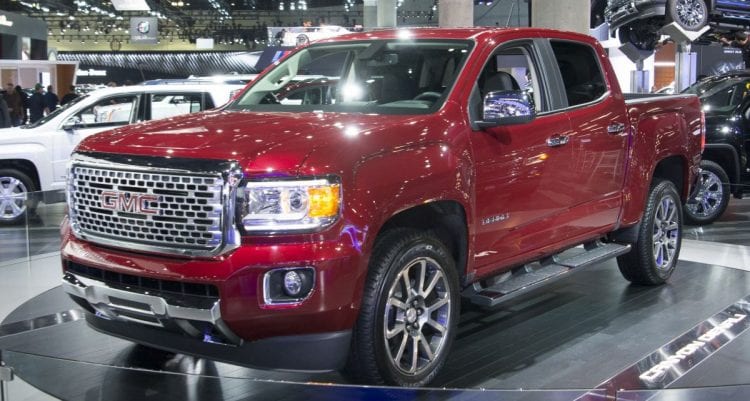 The interior is a central point of any Denali trim, and it’s no different here with the 2017 GMC Canyon Denali. A lot of the accent goes on making this a luxury vehicle inside as much as it’s gone into making it more striking on the outside. Adding another layer of luxury and comfort are front seats wrapped in perforated leather with ventilation as well as heating. Of course, they also have the Denali logo stitched in both of the front headrests.

The dashboard continues the same trend with a leather wrap and contrast French stitching. There are wood accents on both the center console as well as the door panels, bringing, even more, luxury to an already extremely luxurious space. Keeping in line with the exterior styling are bright aluminum trims on the steering wheel and the center console are present here.
Since it is the top of the line model, you do get all of the technology GMC can cram into the Canyon. The touch screen is relatively large with diagonal of eight inches and it’s fitted with the IntelliLink software we’ve seen in use in a number of GMC models. It comes as standard with Apple CarPlay, Android Auto, and even 4G WiFi. The steering wheel is heated, the car is possible to be remotely started, and the sill plates are illuminated (much like in an S-Class). These are just some of the most interesting and noticeable features we are getting. 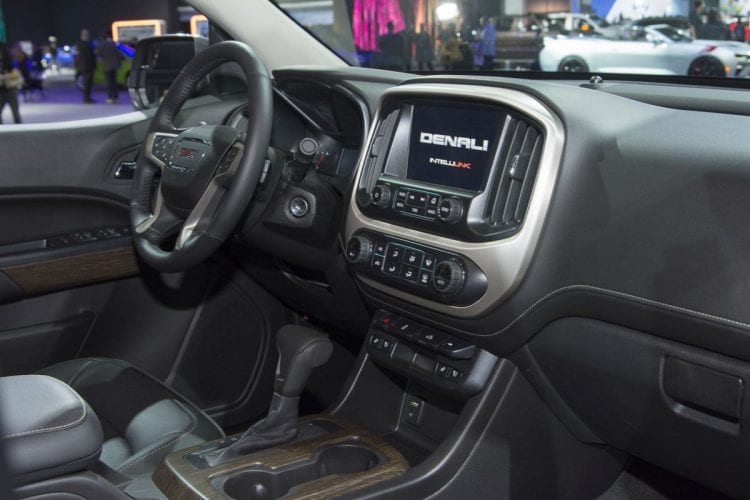 The Denali, being the top trim, doesn’t come with the 2.5-liter unit. The entry-level powerplant is instead replaced with the 3.6-liter V6 developing 305 hp and 269 lb-ft of torque. This gives the Canyon a pulling capability of 7,000 pounds when equipped with the right towing package. The payload stands in at 1,590 pounds, a very impressive result for its segment. The Crew Cab V6 returns 20 mpg on the combined run with the all-wheel drive system, while its two-wheel drive counterpart manages to get an even better result of 21 mpg.

We suspect that a decent number of the buyers will opt for the new 2.8-liter turbodiesel Duramax engine. It made its debut with the original Canyon, and it’s been everything we’ve hoped for and much more. With 181 hp and 369 lb-ft of torque, it’s a real torque monster, capable of pulling anything you throw at it. In 2WD configuration, you can tow a staggering 7,700 pounds. Opt for the all-wheel drive system and that figure drops to 100 pounds, which is still a rather impressive feat. The Duramax Canyon is the only truck at the moment (along with the Colorado) to get a highway fuel economy of 30 mpg (the combined run is 23 mpg). 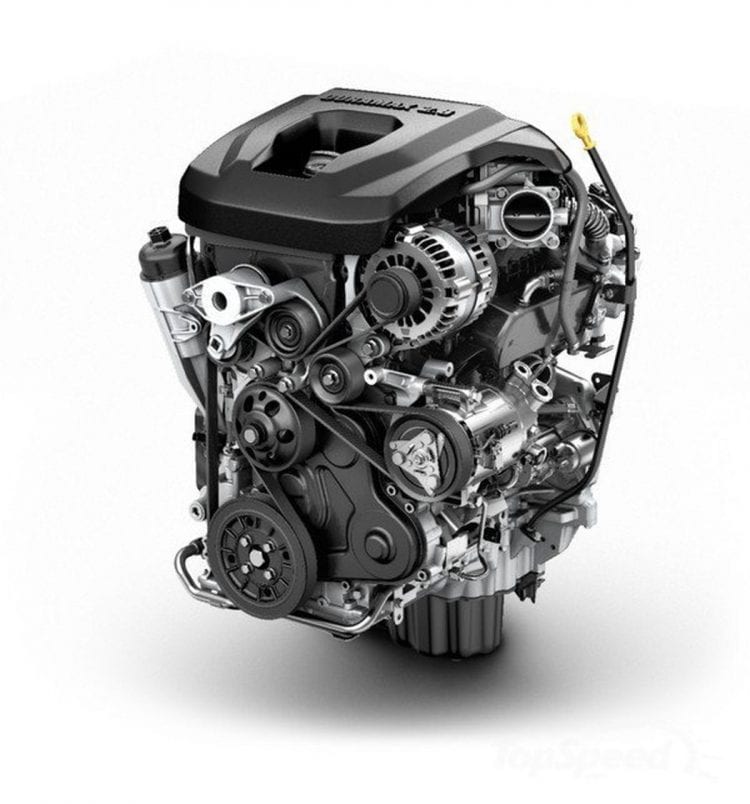 The Canyon Denali goes on sale in late 2016 or maybe even 2017 with pricing yet to be fully confirmed. Expect it to begin at $42,000, making it a great option for those drivers that need luxury equipped truck. If the standard Canyon was ok or even great for you, wait until you try the Denali trim.