After initial confusion and lack of vision, Hyundai finally started to clear things out two years ago when it separated Genesis as a standalone brand. No more Hyundai badges on Genesis coupes, or Genesis logos on Hyundai Equus, or models carrying just the name of the brand.

Since things are now happening the way they are supposed to, a thing that was bound to happen has just been previewed by Korean car maker. Genesis currently have its full-size or executive sedan G80, full-size luxury sedan G90, while entry-level luxury G70 is under way. Nobody could argue that rise of crossovers happened on the huge expense of models that come from sedan segment among else, both mid and full sized ones, so we all knew that winged badge must settle on the hood of taller things soon. 2017 Genesis GV80 is a preview of that.

It represents a concept that is here to give us a clue about upcoming brand’s first SUV, which is probably going to happen around 2020. Hyundai actually plans to offer two SUVs under “special” badge by that time, while it hasn’t been specific about this concept as it stated that it should rival both BMW X3 and X5. Since those BMWs occupy totally different segments, that statement could imply that both future production models should borrow their design cues from this concept, although “80” part of the name and size of the concept draw more to mid-size part of the SUV segment.

Koreans evidently choose the highly minimalistic approach with the design. Extremely clear type of elegance is applied to the body along with the gently sloping roof, while almost nothing tries to disturb sophistication of its serenity. 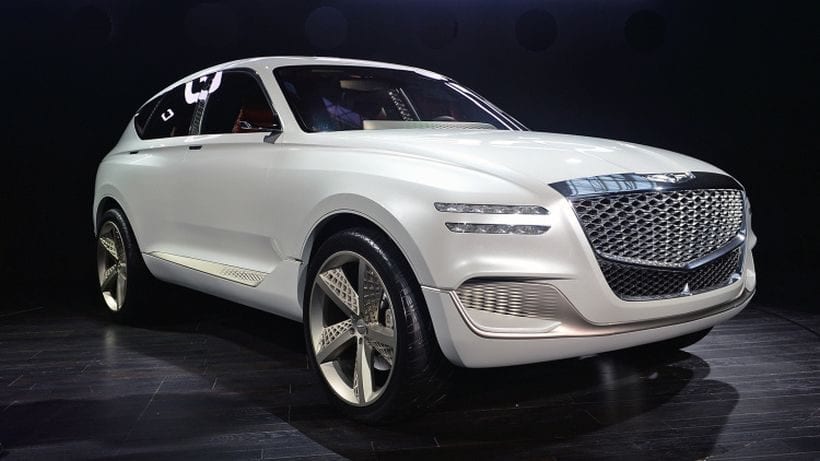 Even lights are shaped in an obtrusive manner, as thin double LED strips, and only large, chromed and meshed grille pose as a character booster but doesn’t manage to spoil at all the whole general feeling. Maybe it is because of the grille or strong body and stance, GV80 somehow shows some resemblance to Bentley Bentayga, but that would be just reserved for overall shape as visual appeal of those two is worlds apart. In favor of Genesis if you wondered.

Beautiful impressions about the styling continues with a two-tone interior. The whole thing is done in Audi’s manner, refined, elegant and void of excessive jewelry. Instruments are presented on the big digital display, while another large screen stretch along the dash with separate displays for driver and passenger.

Dash is clear almost of everything, dominated just by mentioned screen and same goes for the lower part of the console which is stretched all the way to the boot separating rear seats. Door, seats, and pillars are decorated with diamond stitching in resemblance to the one on the grille.

Koreans haven’t given precise information about the powertrain, besides stating that hydrogen fuel cell system is applied. Despite the fact that Hyundai is currently leading the game in hydrogen use, along with Toyota and Honda, it is unlikely that future Genesis SUVs will actually be powered in that manner, mainly because of the enormous lack of fueling infrastructure and availability in the only couple of areas around the world. More realistic is a use of 3.3-liter twin-turbocharged V6 and naturally aspirated 5.0-liter V8 which are in current models of the company. Still, by the time production version arrives those powerplants could experience revisions, while for the future compact SUV model introduction of new ones is necessary, and that could be done by scavenging Santa Fe engine lineup, primarily 2.0-litre turbocharged I4.

2017 Genesis GV80 is a good sign. Genesis obviously needs SUV offer, and nobody would complain if concept design language finds its way to production lines. Also, Koreans for some time now draw inspiration from Audi, also managing to snap its best designers, and interior of the concept is one more example of that. And that is good, as current interiors are the area where Genesis should shine brighter, and we wouldn’t mind if they somehow manage to approach German build quality among the else.