The 2017 Genesis G90 is your first look at Hyundai’s new luxury brand! – Toyota has Lexus, Nissan has Infiniti and Honda has Acura. And it looks like Hyundai has developed its own luxury brand with Genesis. That’s right, the Koreans have caught a glimpse at what a luxury brand not associated with the mainstream car manufacturer does to high-end car sales and they want a piece of the action.

And what better way to enter such a market than with the introduction of the company’s flagship model, the 2017 Genesis G90. Distinguishing yourself in the premium car market can be difficult, especially in today’s market where even mainstream manufacturers have joined and are top-tier competitors. The Genesis brand aims to do so by only selling high-end cars, widening the gap between Hyundai’s mainstream city cars and the luxury limos.

Details about 2017 Genesis G90 flagship sedan are available for few months but this time, we are getting official confirmations on few things about we could earlier hear only rumors. Finally, we are sure that this model will be able to compete with German luxury sedans.

Let’s start with the size. Main competitors like Lexus LS460, BMW 7-Series, Mercedes S-Class and similar all come with small differences in dimensions. For example, LS460 is smaller, but there is also LS460L extended version that is almost identical in size. Compared to S-Class it comes couple inches shorter, but it does offer more interior space. Series 7 is the biggest and G90 is couple inches shorter in both wheelbase and overall length but nothing that will be immediately noticed. 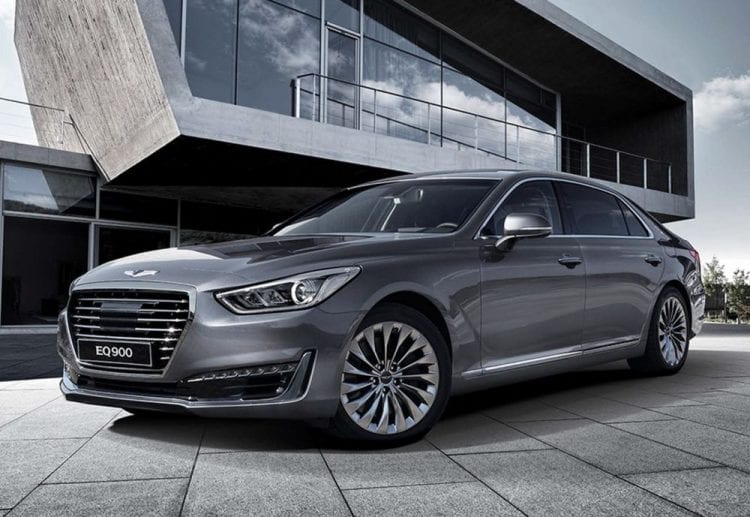 Engines that were rumored are here to stay, and we have 3.3-liter V6 and larger 5.0-liter GDI V8 unit. Base version pumps out 365 hp and 376 lb-ft of torque thankfully to direct injection and twin-turbo system. The Bigger unit is capable of delivering 420 hp and 383 lb-ft of torque and no matter which one you choose it will provide more than enough power and great performances. Both Mercedes and BMW offer more power from their V8 units while the Lexus is slightly weaker. Both rear-wheel and all-wheel-drive versions are offered, and the eight-speed automatic transmission is excellently paired with these powerplants.

Among the things that we like is the level of cushy feel it provides. While it is not on par with some competitors at this price, it is fantastic. Interior is free of any noise, vibration or harshness (NVH) and even at higher speeds it will be enough to whisper and car occupants will hear you. Upgraded suspension system brings it closer to competitors and according to reports South Korean car maker had the help of Lotus Engineering. 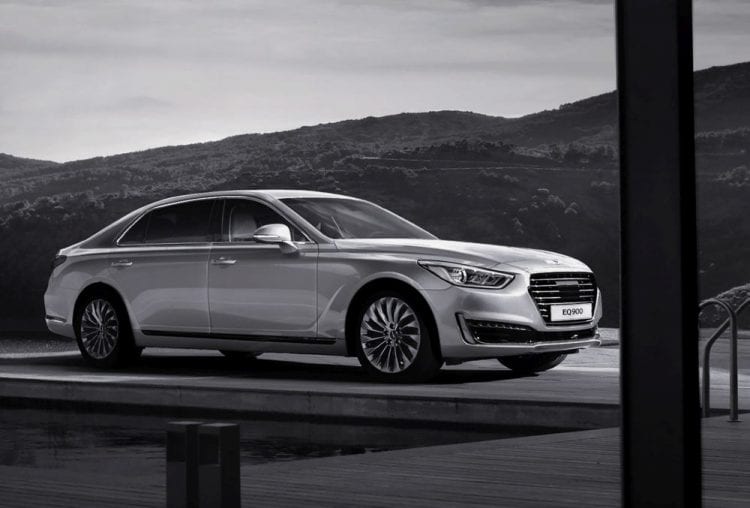 During the last few years, we saw more than few car makers working on autonomous driving systems. These systems will further improve safety but are still far from full integration where we will have a completely autonomous system. It can help out in heavy traffic but don’t trust it that much. It is interesting to add that if you remove your hands off the wheel for longer than 13 seconds car will remind you to touch the wheel again.

Most interesting new set of information is related to price. According to official estimations, it should go from $65,000 to $70,000. This fits nicely into a story about the G80 model that should go from $41,400 when equipped with a 3.8-liter V6 engine. For the 2017 Genesis G90 all-wheel drive model that is powered by V8 engine be ready to give $75,000 and more depending on chosen equipment.

Don’t be fooled however thinking that this is just an attempt, a test to see whether people like it. This is the real deal, and at Hyundai, they are convinced that it will be a big success. With so many contenders for top spots in this segment, we certainly hope so, because the competition is fiercer than ever. 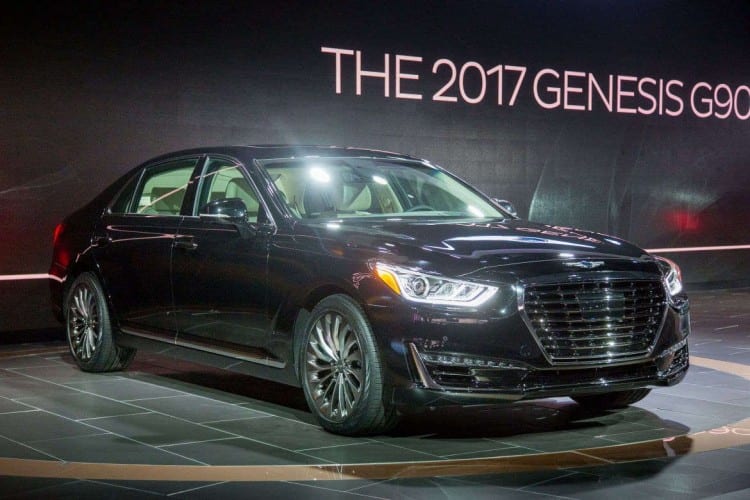 Let’s start off with the car’s looks. It’s pretty conservative, which is a good and a bad thing. It’s a good looking car, but some would critique it for looking too much like the current S-class, and they’d be right. The front is reminiscent of it although the headlights are much bigger, but the grille looks a lot like something that you’d find on an Audi. The back, however, is very S-class and is just plain boring, not to mention unoriginal.

Now it’s normal for cars in this segment to have an understated look because after all, that’s what they’re aiming for. Big performance and lots of understated luxury. In this case, however, one has to wonder where the line is between good simple looks and just plain unoriginal design. We’d say the Genesis is leaning towards the latter. Will it be good enough to satisfy potential buyers and to attract more people to the brand?

Dimensionally the car is almost the same as an S-class too, although we have to say that it does at least stay true to the Hyundai Vision G concept, giving it points for following through. Compared to the Hyundai Equus, the car the 2017 Genesis G90 replaces, it comes with a much better proposition. It looks miles better, but still lacks something the other cars in the segment (especially Germans) have. 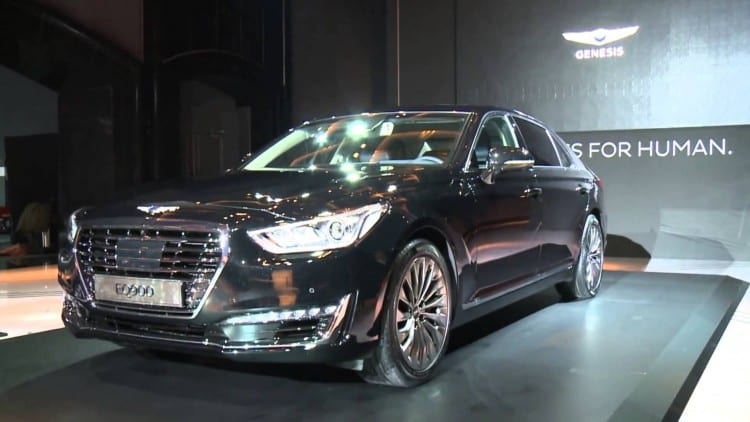 Then you get in the interior however and the 2017 Genesis G90 immediately redeems itself. It’s everything you’ve ever wanted from a luxury high-end car and more. All of the materials are of the highest-quality, and everything is soft to the touch and makes the right noise if it even makes any noise. The seats, for instance, are wrapped in beautiful leather and just welcome you in. The door makes the perfect noise when you close it and gives you the impression that it’s insulating you from the outside world. Although the exterior may have disappointed a little bit, the interior hits the sweet spot.

Speaking of the seats, the driver’s seat is 22-way power adjustable, the passenger seat is “just” 16-way power adjustable and the rear VIP seats are 12-way adjustable, with the right one being 14-way. Materials are of the finest quality as expected and there’s not a bad surface within sight. Even South Korean car maker brought pretty much top of the line features they have they still fall short when compared with German luxury brands.

There’s also a Smart Posture Caring (SPC) system, which automatically adjusts the driver’s seat, the steering wheel and the head-up display to the diver’s body, shaping everything to suit his needs. In a luxury limo like the 2017 Genesis G90, this is a nice touch added by Hyundai.

Keeping things quiet is a job for the laminated windows and much thicker carpet, as well as the doors which feature triple seals and double-pane glass. Keeping things loud, however, is a job for the 17-speaker Lexicon audio system that also has a 10-inch subwoofer. This premium sound system will allow you to enjoy any type of music thankfully to perfectly clear delivery. If there ever was a car for long journeys in comfort, it’s this one.

Although it’s not up there with the Germans in terms of technology due to the fact that it lacks a semi-autonomous mode, it has more than enough technology that it would have been called a supercomputer just a few years ago. There’s advanced adaptive cruise control, auto-braking, driver-drowsiness monitor, lane assist and so on. The list is as long as the car is itself. 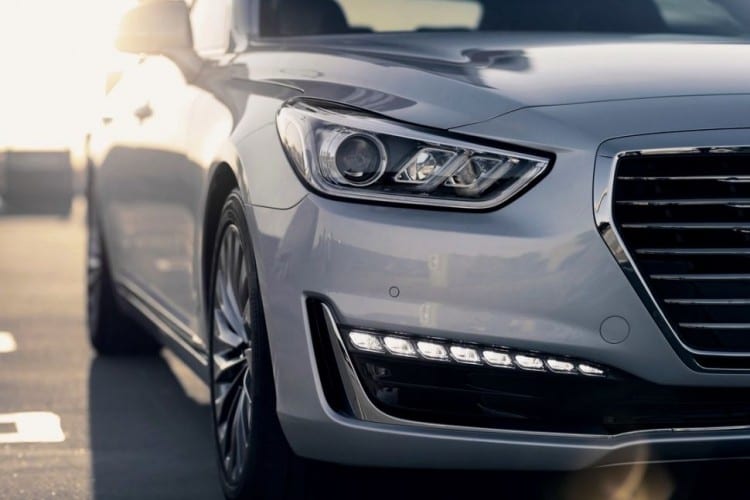 So it looks okay and is extraordinarily comfortable. But what about engine choices? Well, the first one is the Tau 5.0 liter V8 that we already know from Hyundai. It’s a powerhouse of an engine, developing 420 horsepower and 383 lb-ft of torque and is more than enough to propel this executive limo to triple speeds in no time.

It’s the base engine that’s more interesting however. A new 3.3 liter twin-turbocharged V6 that has 365 horsepower and 376 lb-ft. That torque number is nearly as much as what we are getting with the V8 engine. Both engine choices will run on regular fuel and are mated to a lighter eight-speed automatic that saves 18 pounds when compared to previous generation of transmissions.

Chassis wise, the 2017 Genesis G90 has a front and rear multilink suspension set up with adaptive dampers. Driving modes can be automatically switched on by the car depending on the driving style with individual settings for the suspension, transmission and throttle. There are 19 inch wheels housing 14.8 and 13.4 inch brakes front and rear respectively. Fronts are four-piston while the rears make do with just two making the setup that will firmly and easily stop you from any speed. 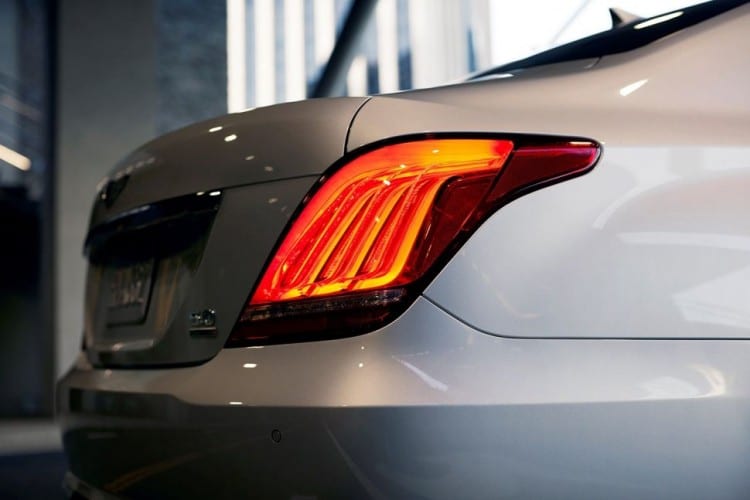 At this point we don’t have any details about the price list for 2017 Genesis G90 so we can only speculate comparing it to some of the competitors and other cars in Hyundai’s lineup. Price for the entry level of Hyundai Genesis was set to about $27,000 and since it will be renamed to G80 and positioned under the better equipped, more luxurious and larger G90 we are sure that G90 will be lot more expensive.

Among the competitors Cadillac CT6 can be purchased starting from about $55,000 while the other like Mercedes S-Class, BMW 7 Series, Audi A8 and Lexus LS are offered from $74,000 to $96,000 at least for base versions. Looking at the situation we will be surprised if Hyundai decides to price its Genesis G90 model at lower than $50k.

The Genesis G90 is not to be confused with the Hyundai Genesis. The already existing car is a sedan that will soon be renamed to G80 and will join the line up alongside the G90. This car is certainly a step up for Hyundai and it can be compared to top level luxury sedans currently available on market. They not only entered the world of premium cars with style, but are in it to win it.

Whether you like it or not, Hyundai has become one of the best manufacturers both in terms of quality and reliability. Whether customers of the already established German trio will decide it’s time to swap their German executive saloons for the Korean is yet to be seen.