Ford Ranger has a pretty decent history in the US. It was introduced in 1983 and subsequently became best-selling compact truck in the US from 1987 to 2004. Despite that, demand for compact pickups was fading rapidly, and the third generation was discontinued in 2012. This also marked the end of production for the small trucks in the US market. That actually didn’t mean the total end for Ranger as it was continued to be sold in other parts of the world with the T6 designation from 2011 till today.

WHY NO US ANYMORE

There are several reasons. One is that current T6 Ranger is produced in Thailand, Argentina, and South Africa, so import to the US will add 25% to the price due to the infamous and outdated “chicken tax” poised at light trucks. Also, it has mid-size dimensions which could endanger the sales of short bed F-150 as it is lengthier than it. Anyway since demand for smaller pickups is rising in recent time, next generation of Ranger is coming back to the US and not just in dealer lots but also on assembly lines in Wayne, Michigan. 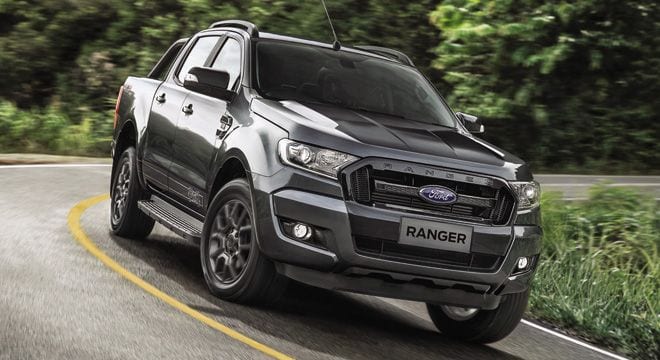 WHAT ABOUT THE PHILIPINES

Well, current Ranger is sold in the Philippines, while 2017 Ford Ranger FX4 is a special delicacy. In mentioned country, a vehicle like this is almost a status symbol, so it is better for it to be able to provide more that just rugged cargo space. And happily, it does or at least to some degree.

WHAT FX4 STANDS FOR

It is vicious looking Ranger. It obviously descended to darkness as grille, hood, rear gate, roof rails, mirrors and door handles are all covered in black. There is even more when it comes to a black color as a line stretching accross the side of the car plus matte-black bars are offered in the bed area. There is also plenty of FX4 lettering, so it is easier for everyone to attribute this styling change to something. The reminder is also present on the inside since front seats are decorated with mentioned logo.

There is only one engine offer, and that is 2.2-liter Puma turbo diesel unit delivering 160 hp and 385 Nm of torque. Mentioned diesel offers proper reaction to push on the pedal and Ranger is one of the best driver-oriented trucks. Ford applied its well-known magic delivering both driving joy in the corners while not even slightly compromising comfort.

FX4 don’t feature Ford’s new Sync 3 and not even Sync 2 infotainment system. It comes with old and outdated Sync 1 system which doesn’t even come with standard navigation. The crushing part of everything is that our special edition comes only as RWD model, despite the fact that FX4 stand in the US market for proper AWD in F-150 series and old Ranger models. Here it appears to be just a fashion moniker.

In the end, the 2017 Ford Ranger FX4 on the first look could appear as perfect all-rounder, but it’s not. There is no power for all wheels, reducing harshly its all-terrain capabilities and tech parts in the cabin are questionable. Price is its main point as it is only 80,000 PhP (equivalent to $1,600) pricier than regular XLT version sitting at 1,359,000 PhP (or $27,000).

Besides that, since ride and comfort are huge pluses, it could attract those trying to leave special appearance statement in the city streets, while not intending to impress the nature.