It was the year 1964, and Ford had an idea. They thought at the time that the world needs compact, affordable, but also good looking and fast sports car. It created “Pony” class by launching new Mustang, and things were never same again. The world went ludicrous. On the first day of sales, 22,000 orders were received, in the just year and a half, one million Mustangs were roaming the roads and alone in 1966 staggering 607,000 units were sold. It broke all possible records, and no other sports car managed to come even close to it so far.

Currently, it is in the sixth generation, and Ford did one thing to make this generation special, it went global with it. The decision proved to be very wise as the available model is the best-selling sports car in the world with 140,000 units sold in 2015. Even in strongly patriotic Germany, it became a best seller among sport niche, outselling home made Porche 911. Basically, Ford did it again despite ridiculous present day sales numbers compared to one in 60’s, these are just different times and number one spot is what it is. So, let us review what 2017 Ford Mustang has to say on all of that.

Two years has passed since introduction and the car still looks stunning. The last generation had more muscular front fascia due to the headlights, while new one had to suit European tastes too and it exchanges part of brutality with sleekness. It is still iconic looking muscle car, it just sold some of that traditional muscle heritage at the front, while the rear is still executed in proper old school style.

Cabin saw a huge upgrade in quality of materials with this generation, yet it still far from premium rivals, as it is not even trying to go there. Despite improvements, it is still American cabin, and while you lose in plastic, you’ll get in space and sense of power. While in the seat, you feel to drive something monstrous, which must have something to do with staring in the two hood bulges, and also at the same time it appears totally controllable. Styling wise it is an improvement over the predecessor, offering more complexity to suit non-US preferences. 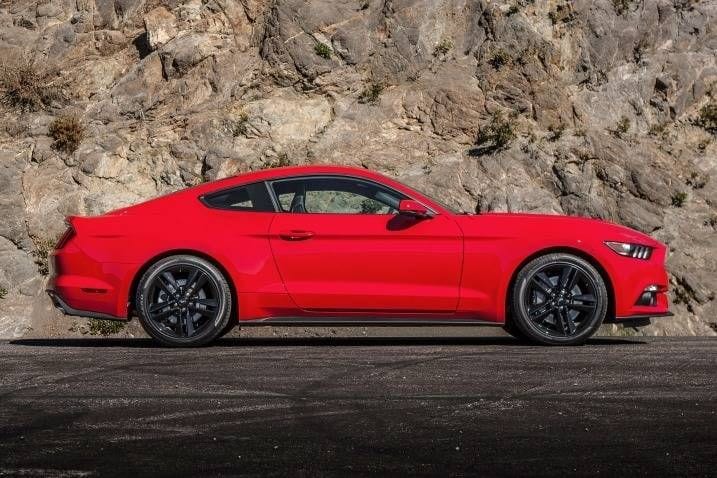 The entry point to the world of Mustang would be 3.7-liter V6 naturally aspired petrol engine, delivering 300 hp and 280 lb-ft. The more popular choice is Ford’s new EcoBoost 2.3-liter turbocharged petrol unit offering 310 hp with 320 lb-ft of torque, beating old school V6 in dynamics and fuel economy, though turbo lag is quite noticeable. The special offer is large 5.0-liter V8 in GT version, pumping out 435 hp and 400 lb-ft.

This is not all as Shelby played a traditional role with Mustang and offered GT350 and GT350R versions, with 5.2-liter V8 and staggering 526 hp and 429 lb-ft of torque. Additional R means more racing bits for hotter lap times, although engine stays the same. Ford offers 6-speed manual or 6-speed automatic with mentioned engines, while Shelby doesn’t accept automatic preserving driving pleasure in the old fashion.

With previous generations, you basically got big, mean looking muscle car, at the same time acting as heavy, clumsy elephant when forced to corner. It was always fast as long as you don’t turn the wheel. It suited Americans searching for comfort even in this class, while everybody interested in proper driving had Shelby to turn too. Well, now things are different, Europeans want VW Up to corner good, and this generation has to please them too.

It went perfectly as ride comfort is still decent and in the same time car is quick, eager to change direction and not afraid of the apex. Shelby offer stayed subliminal in that area as always.

We mentioned it is best-selling sports for the previous year and it will be probably again for this year. Base price is $24,000 in the US for 2017 Ford Mustang, which is actually a bargain for just a perfect muscle car that can now corner.