One of the segments that suffered most by birth of crossovers is mid-size sedan one. It delivered diminish and even extinction of some players in Europe such as Honda Accord, while Citroen is double thinking about launching a successor to C5 model, which is probably not going to happen. In the US, volume seller as Camry or Accord seems untouchable while Ford Fusion is following closely, leaving suffer to other models.

One more thing, as the fame of saloons is fading, we haven’t seen special attention for some models like they did receive before. Remember Mazda 6 MPS, Ford Mondeo ST or Opel Insignia OPC in Europe, or maybe Chevy Malibu SS in America? Honestly, many of current models carry powerful V6 under the hood on US soil, but none of them received that special attention, or until 2017 Ford Fusion Sport arrived.

It is the Sporty version of Fusion revealed last year, breaking the 300 hp boundary that was existing with a current offer of mid-size sedans. And it is not just about more V6 power as it is followed by some neat styling touches and vigorous road manners. So, if most of the hatches have its spicy edition, as well as some of the full-size sedans, why should mid-size ones suffer. Further to that, there is Focus RS, and there is Taurus SHO, why leave an empty space between?

To break the 300 hp boundary, Fusion borrowed 2.7-liter twin-turbocharge V6 from F-150 delivering 325 horsepower and 380 lb-ft of torque. The engine is mated to a 6-speed automatic and AWD comes as standard. That should be enough for reaching 60 mph in just 5.3 seconds. It doesn’t end there as Ford could just shuffle powerful V6 under the hood and that’s it, but this is Sport version, and you’ll get more for that.

There is continuously controlled damping borrowed from Lincoln which is there to give you more lateral G’s as you rush through the corners. In the end, everything falls on one button- S, click it and Sport part of the name justify its meaning. Mentioned dampers stiffen up, steering becomes heavier, throttle gives better response, gearbox shifts more aggressively and even exhaust gives better music. Actually, that last one is a lie, as all that better melody comes from speakers.

WHAT’S WRONG WITH IT?

A couple of things. First, the steering wheel has been nicely weighted when S button is engaged, but more information about the things underneath would be more than welcomed, there is a fair amount of understeer when it is pushed hard, brakes could be more fade proof and seats should be more supportive. Whether the next one is a flaw or not, depends on your preferences.

Visually if you go for Sport version, you’ll end up with black mesh grille, quad exhaust and spoiler on the outside, while contrast stitching, some carbon fiber accents and matte effect for some surfaces are offered inside. That is it, and it is far from Focus RS visual madness, and it is even hard to distinguish it from the regular variant, but you may like it as this is not supposed to be M or AMG rival, just more potent family howler. 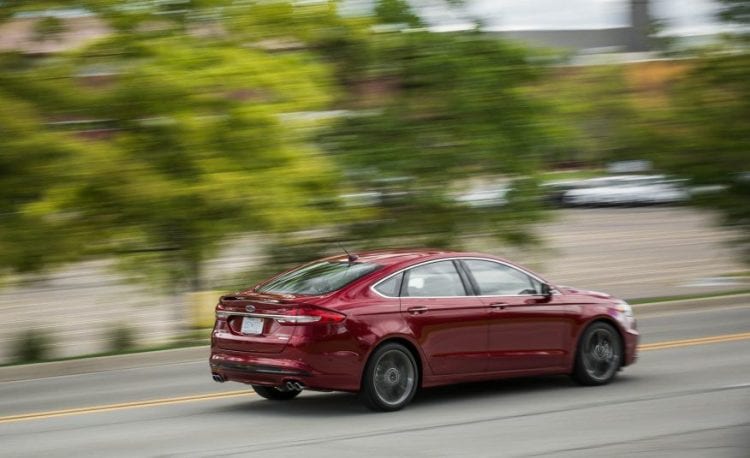 SHOULD YOU GO FOR IT?

Why not. 2017 Ford Fusion Sport starts around $34,000, and it just up the game for all mid-size saloons out there. Until some rival decide to squeeze more V6 power, you’ll be proudly only one pushing over 300 hp, and if you were into sleepers, you appreciate only subtle visual touches to it.

Anyway, if you want sporty sedan of that class, there is anything else at this moment, so you are stuck with it, which is far from a bad spot to be in.