Following most of Ford’s lineup, the 2017 Ford Fusion Hybrid gets a facelift as well. We already know what the previous model is capable of. Although it received a fair amount of criticism for certain areas, we still think it’s a great car. Well Ford seems to agree because they have continued its production, but they also listened to the people and critics so they have introduced some upgrades. The infotainment system has been upgraded (no surprise to anyone). The old MyFord Touch is gone and in its place now lays the Sync3, but more on that later. There are a few different trims, namely the S and SE get a nine-speak audio system while the flagship model is now the Platinum, adding all possible options. 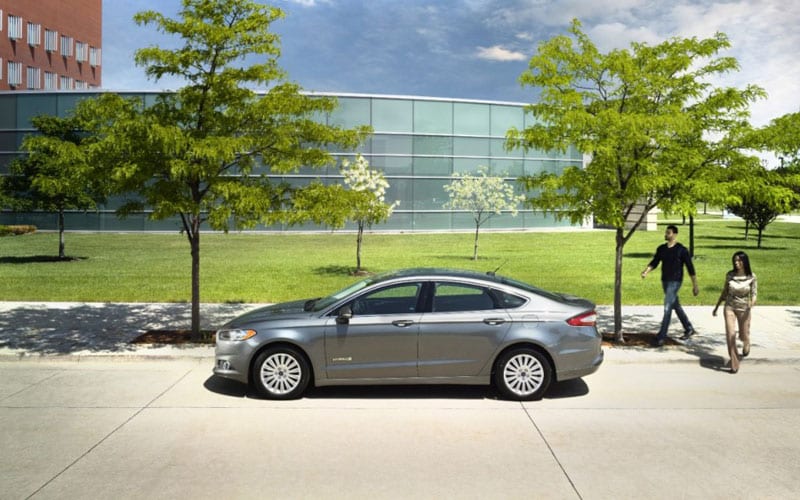 When you think of hybrids, one car in particular pops up in most people’s mind: the Toyota Prius. We can’t really blame them. It was the car which pioneered this entire segment and the one which still sits on top of the fuel-efficiency chart. The Prius is not suited for everyone however. The interior can be unpleasing to some and so can the exterior, especially with the new update it received last year. Thankfully if you want a hybrid more similar to home (a classic vehicle), you have the new Fusion Hybrid. 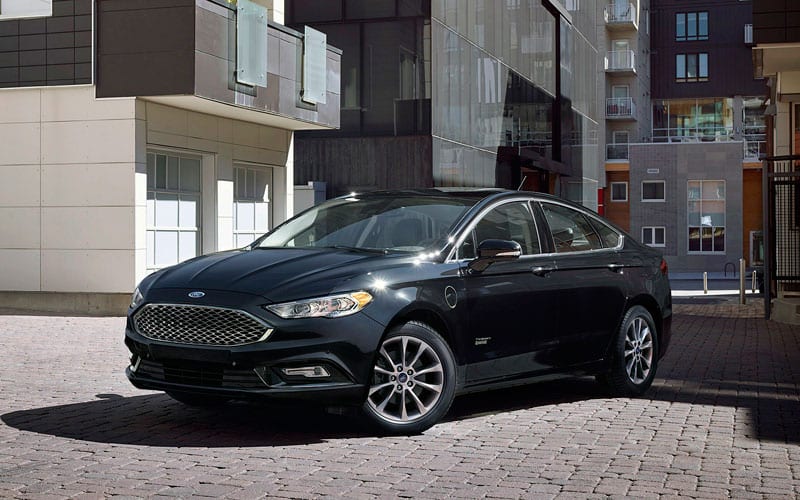 From the outside, the 2017 Ford Fusion Hybrid is just about as handsome as midsize sedans get. It’s one of the most handsome vehicles in the segment and perhaps one of the best looking cars on the market today. When it first came out people said that it looks like a four-door Aston Martin, and with the headlights they wouldn’t be far off. The new headlights in the Fusion really do have something special.

Buying the right vehicle can be tricky, especially with the amount of trim levels and options on offer these days. Often even the simplest of cars have a large list of options you can specify, but the question arises: do you really need all of them? Well, in most cases no, you don’t. Fuel economy in the Fusion Hybrid is the same no matter which trim or option you go for, so if that’s your only concern save some money and go for the most basic model. We think it’s a matter of getting that perfect mix however, so we’d ideally spend a few more grand into the Fusion Hybrid SE. You get the best of both worlds with the SE. It’s not that expensive, plus it has nice gadgets as standard. You even have the possibility of opting for the Technology package if you want to do so. In our opinion, everyone should get the Technology package as it includes the Sync 3 infotainment interface, and that alone is more than worth the money. 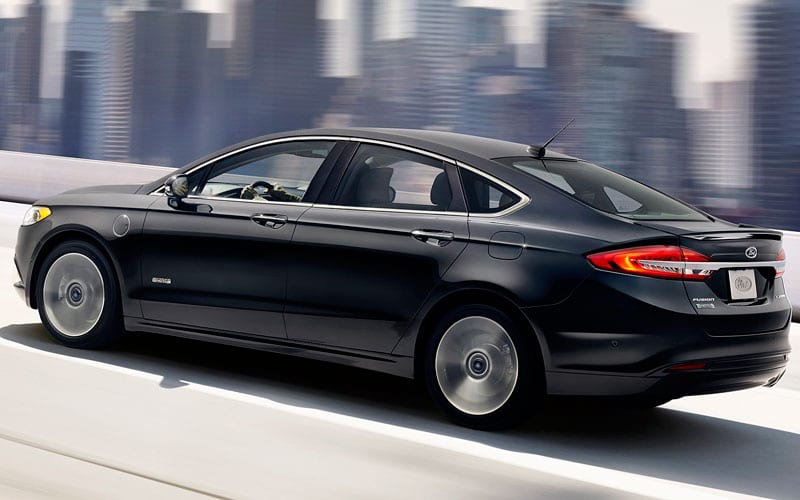 The interior of the 2017 Ford Fusion Hybrid is simple but effective. When it comes to functionality, this car is king. The driver seat is very easy to adjust into the right position and you have great visibility almost all-round. The rear visibility is slightly obstructed by the sloping window at the back but the rearview camera quickly eliminates that problem.

Everywhere you look you notice sharp angles and a very elegant look in the entire cabin. The interior is more than a match for the interior, we’re pleased to report. It’s not uncommon for a car with a great exterior to have a bad interior, only disappointing owners in the long run. They do that to attract customers with the exterior alone, but in the end it never works. We’re happy to say the Fusion Hybrid is anything but that. The entire emphasis has been put on the open-concept. By removing any extra clutter and using nice surfaces, Ford has managed to make the Fusion feel more upscale than it actually is, judging by the price alone. The seats are very nicely designed and so is the dash. The fit and finish is super everywhere you touch and look. This is a cabin in which we’d be more than happy to spend a long journey. 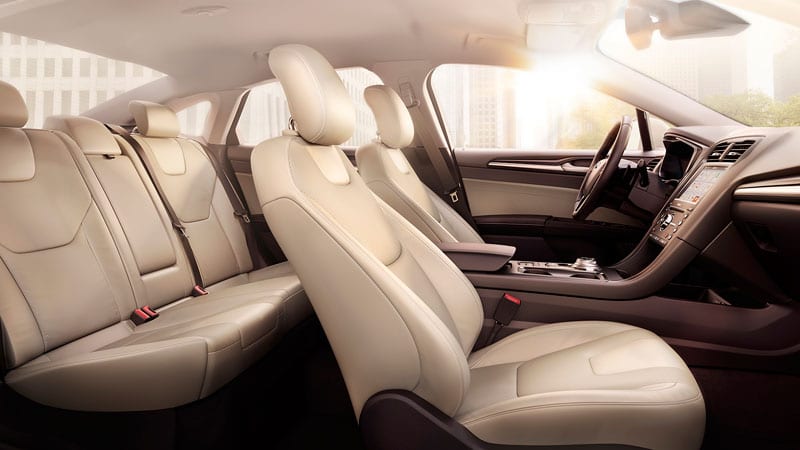 If you don’t go for the brilliant Sync 3, you might be slightly disappointed by the standard system in the Ford. The basic Sync is complicated to operate and the small screen on which you use it doesn’t make things any better. If your budget can stretch to the Sync 3 we really advise you get it. It isn’t just more responsive and better in every way, but the accompanying 8-inch touchscreen is a joy to use. It’s very user friendly and intuitive, not to mention stylish.

Elsewhere, the trunk space takes a beating. The battery pack takes its toll in the form of trunk space. There’s 12 cubic feet, 4 less than the standard model. Then again, every hybrid has the same issue and the Ford is actually great for what it is. 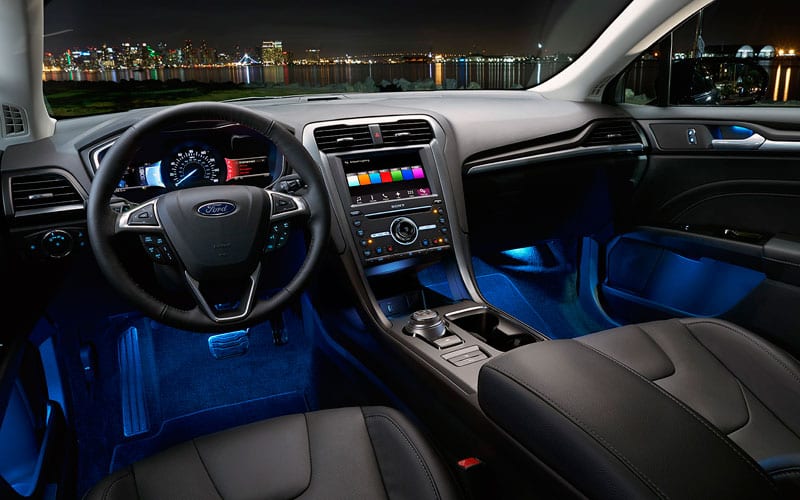 Under the hood you’ll find a 2.0L inline-four gasoline engine producing 141 hp + 129 lb-ft of twist, and working in conjunction with the 88-kW electric motor. The electric motor is powered by a lithium-ion battery pack. With everything combined the 2017 Ford Fusion Hybrid can deliver 188 horsepower through the front wheels alone. It uses a CVT to transfer all of that power, and although we’re not fans of CVTs, it’s ideal here, and in any hybrid for that matter.

Speed isn’t the main point here but for statistic’s sake here it is: the Fusion Hybrid will get to 60 miles per hour in 8.5 seconds, making it average for the class. If you want speed, don’t get a hybrid. If you must however, go for the Camry Hybrid as it will reach 60 mph in 7.5 seconds. The best feature of the Fusion Hybrid is undoubtedly the fuel economy. It returns 42 mpg on the combined run with an incredible 41 mpg on the highway and 44 mpg in the city. That’s right, it’s actually less in the city. 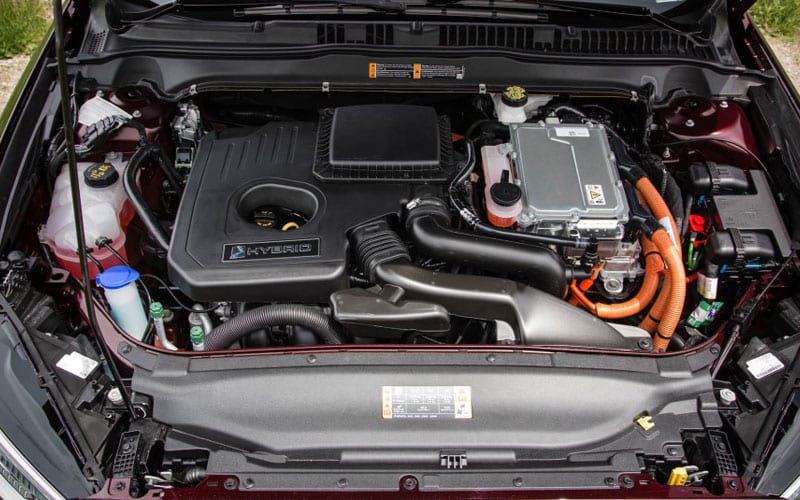