After lots of leaked images, teasers, and speculations, we got to see the Focus RS a few months ago. It boasts a Mustang sourced EcoBoost engine with 350 hp and 350 lb-ft of torque, all-wheel drive and even a drift button. Yes, that’s right, it’s the first factory vehicle to come with a drift button. With that, the lineup appeared to be complete. You have the standard Focus, the ST for those who want a bit more power and the RS for lunatics and hooligans. Well, Ford had other thoughts and plans. Apparently, the gap between the “standard” ST and the beast that is the RS is big enough that they reckon they can fit a whole new model in it. Recent images showed an ST-looking Focus being tested at the Nurburgring. We say ST-looking because it sports different body parts to the current ST but still comes with a decent number of almost identical segments. With a 100 hp difference between the ST and the RS, it’s safe to assume a filler model is going to be offered, and it shouldn’t be far off the 300 hp mark.

There is yet no official info on it, or whether it will happen but we would be shocked if it doesn’t. The name might stick or it might not, depending on whether Ford opts to go with the same name branding as with the Fiesta ST200 moniker. Expect it to debut later this year, at the Paris Motor Show in October perhaps. Official announcements are sure to come in the following weeks or months so make sure you stay tuned to find out all the latest news but for now, let’s get straight down to the details of the new mystery Focus. 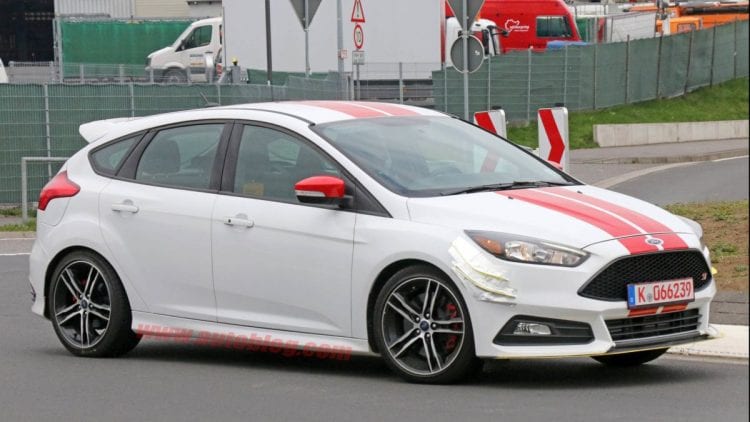 At first glance, the images aren’t that revealing. It looks just like a standard ST but let’s take a closer look, and you’ll spot the differences. The first change obviously is the new aerodynamic kit that Ford is testing. It includes a new thin splitter at the bottom of the bumper and a pair of winglets at the front corners. It’s uncommon seeing winglets, especially ones mounted so high, on road cars. They’re usually found on rally vehicles, but judged by the way they were mounted here; the final version might not even get them. Apart from that, it’s your basic Ford Focus ST. Nothing out of the ordinary.

We’re sure Ford will include a few extra pieces to distinguish the new model from the standard ST (think about new roof spoiler, revised bumper, and maybe even a diffuser at the back). New wheels will probably find their way onto the new car, with a special design that is unique to the model in combination with lighter alloy material. All in all, knowing Ford, we expect nothing but great things from the new Focus ST, whatever they decide to call it.

As far as the interior goes, we’re going to have to leave you in the dark because sadly we don’t know much about it either. Judging by previous iterations of fast Fords and indeed, other performance hatchbacks, the interior will remain the same as it’s the one place manufacturers usually keep the costs down (as it should be). It would be safe to assume that it will be identical to the ST but this is Ford, and a couple of extra gadgets are in order, especially for the higher asking price they will be placing upon the buyers. Carryover things like in the ST200 such as the leather upholstery for Recaro seats, redesigned door panels, and new badges are expected to make an appearance. If the intuition is anything to go by, the new Focus will be littered with ST280 badges all over.

The engine will almost 100 percent remain the same 2.0-liter EcoBoost I4 unit like the one in the ST. As always, it will receive more power but how much more, we can’t say for sure just yet. It will probably remain closer to the ST rather than the RS, but power figures up to 300 horsepower are possible. Yes the name is likely to be 280, but that doesn’t mean they can’t give it 300 hp (we can dream can’t we?). In all likelihood, however, it will produce some 280-odd hp, a great 30 hp bump over the standard ST. The torque should see an increase as well, rising from 270 to around 300 lb-ft. Performance segment shouldn’t see a big improvement although a 0 to 60 mph time in the 5.7-second range is possible (from 5.9 seconds in the current ST). The top speed, on the other hand, is almost guaranteed to remain the same at 154 mph.

Power, like in nearly all Fords, will be sent to the front wheels via a six-speed manual transmission, borrowed from the ST. The likelihood of an automatic transmission is slim, but we say all the better for it. The suspension is scheduled for some upgrades too, mostly in the form of new stiffer springs and different shock absorbers all-round. Bigger brakes might surprise us too, but we doubt they’ll make an appearance, seeing as how additional 30 hp won’t challenge the current ones. Different, more aggressive tires on the other hand might. The need for better tires rises exponentially as horsepower increases as well, and this is especially noticed with the front wheel drive vehicles. 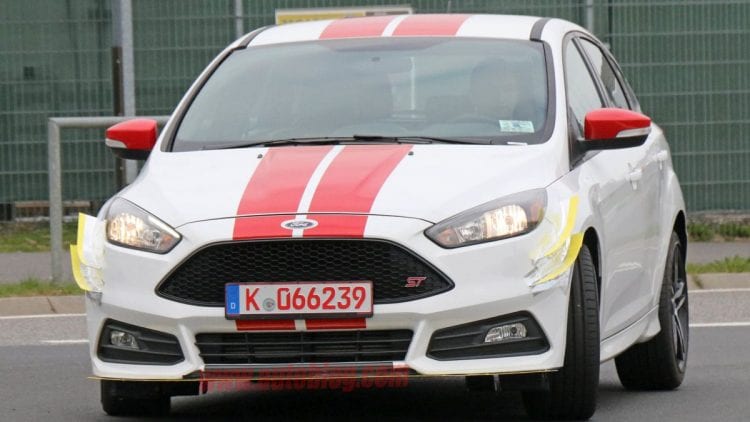 Prices, just like the launch date and all of the details aren’t available yet. If the new ST280 is positioned between the ST and the RS performance wise, then that will be the case price wise as well. This means a price point of around $27,000, which is $5k more than the standard ST and around $9k less than the RS. As you can see, the major difference between standard ST and ST280 is the 30 hp extra and slightly more torque. Furthermore, few aero upgrades will come, but that is about it. A good question is if that $5,000 extra is too much for changes we get here.

One thing to note is that Ford might choose not to bring the ST280 to North America. If you’re in the U.S. or Canada, don’t get your hopes up just yet. Ford has a history of bringing hot hatches only to Europe, and the same might be the case with the brand new ST280. Either way, enthusiasts somewhere will be happy, and that’s all that matters.