Ford has pushed its name closer to sports aspirations more and more until we started to seriously compare dynamics of regular Mondeo to the one of BMW 3. Furthermore, until RS started to appear as a benchmark, latest Mustang begun to decimate competition even in Europe and Ford GT became something unreachable for most other makers. We will “focus” now on Focus, and its hottest RS badge.

As much Focus ST looks better than the regular model, that much RS looks better than ST. It’s not exaggerated, as it looks as ST got angrier a bit. But don’t be fooled, it looks aggressive, as it should be without crossing the line of too much. Plus, that Aston Martin’s grille appears even more highlighted with enlarged air intakes on the bumper. At the rear, big spoiler and bold diffuser make enough of the statement. 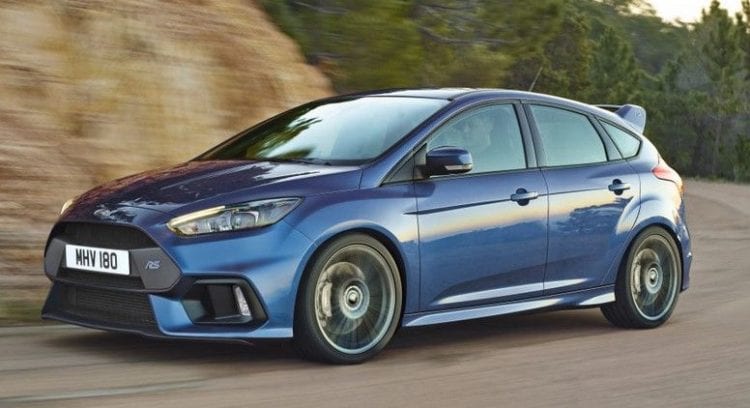 Inside hasn’t followed the story. It is almost same as ST version, and apart of some of RS badges don’t expect more. Seats are comfy, you can seat four grown adults, and you can trust your boot for shopping, as it is based on regular hatch anyway. Due to the Recaro seats, you have only four airbags, scandalous at first thought, but at second, if you care about your life that much, you wouldn’t look for this badge at all. Don’t get us wrong, as this vehicle is still one of the safest in the segment.

Fit and finish are not bad, but the quality of plastic and overall darkness in colors is, so styling-wise it’s not going to impress, but maybe that’s hardly noticeable as you burn your tires on the tarmac.

Expect part of praised Ecoboost family to be sitting under the bonnet Weapon of choice is the 2.3-litre turbocharged four-cylinder engine tuned to 350 hp and 470 Nm of torque on over boost. When activate, over boost lasts 15 seconds, and it is enough to tear your friends while doing traffic light racing, and after that, you have 440 Nm of torque to drive back home proudly. 0-60 time is 4.7 seconds, and together with available power, it is in total staggering, as it is approaching AMG, M and RS3 field of habitation.

It got’s AWD while 70% of power desirably goes to the rear and a just six-speed manual is offered, and don’t try whine about it because you bought it for driving pleasure, not comfort.

Before “that” let’s say that this 2017 Ford Focus RS will make outrages noise in Sport mode and you don’t have to look for the tunnel to hear it. One thing is interesting, and that is understeer, the follower of all hatches. Well, not here, as there ain’t any. It just won’t do it, unless you are a total maniac and go with 100 mph against Corkscrew at Laguna Seca. Now “that” button. Go ahead and push it and enter the glorious Drift mode, or it should be called endless fun mode. It will let you make more donuts than you eat while keeping you safe as electronic is guarding you all the while.

Forget about safety concerns arisen with the introduction of the famous button, everybody with rear wheel drive can drift, everybody can disengage ESP, and everybody that wants to do it, will do it, so it doesn’t make anything more dangerous. Go ahead and attack LaFerrari with claims that it is calling for suicide with almost 1000 hp. Everything is actually totally contrary as “dubious” mode offers help with the whole drifting process, so inexperienced wannabe racer moms can excel sigh of relief.

It became the benchmark in its class, and it is there to stay. It will threaten premium with the fun of driving and power, although not with the interior. Keep the price of $ 36,120 in mind, and maybe this is the best sports car in the world. If it’s not, it is definitely best daily joy that “cheap” money can buy.