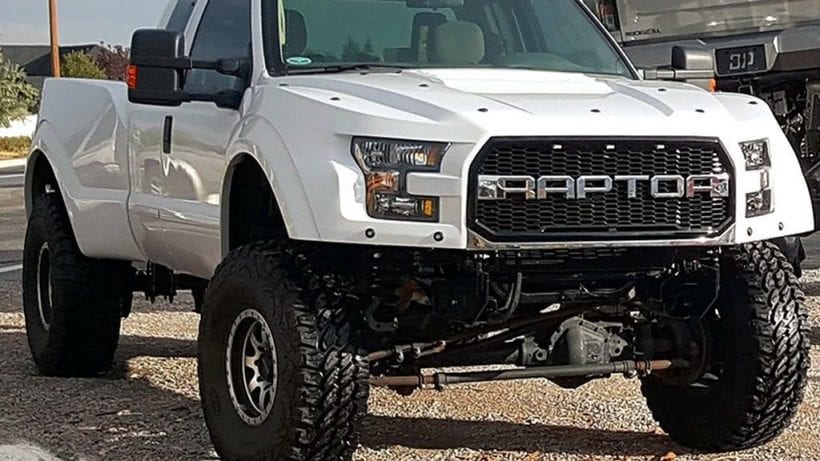 There is no other pickup that can produce such amount of cravings as Ford’s Raptor. It is the ultimate embodiment of everything that anyone could wish for from a truck. It is a pure beast, and many are bought without any intentions of cramming its bed with lots of rough stuff or towing anything ever. Yet, trucks are bred for that kind of work and Super Duty series exist for nothing else. So, if you are about to buy your truck and use it according to its nature, does that mean Raptor is out of the equation?

Well, yes, if you are about to tow above 8,000 pounds or add more than 1,200 pounds of things in your bed. So, it is either work or fun? Don’t go mourning yet, as guys from a company called F250R in Tuscon, Arizona, might come to rescue. We will kindly explain how, but there is nothing kind about it. F250R takes your F250 Super Duty Series and transforms it into something most easily described as a monster truck. They called that thing 2017 Ford F-250 MegaRaptor, and hardly any other Raptor will stand in its way. Word “mega” is properly used in naming as calling this thing huge might be an understatement. Let’s dive now into details.

The base would be your F-250, but it will look nothing like itself after F205R is done with it. Hood and fenders will be gone replaced by fiberglass panels, while bumpers will be also gone but replaced with nothing if you don’t go for optional custom ones. Hood now have huge vents, front fenders are almost nonexistent, while meshed grille and lights appear as borrowed from regular Raptor.

The truck is raised by 4 inches, while carrying 20-inch military spec alloy wheels, with mind-boggling 46-inch tires. The size of the tires is the main reason why regular Raptor looks like a city car next to it and why you could use a ladder to climb into it.

Guys from Tuscon don’t mess with your engine, so it is still either turbocharged diesel 6.7-liter Power Stroke V8 pumping out 440 hp and 925 lb-ft of torque or naturally aspirated petrol 6.2-liter V-8 rated ar 385 hp and 430 lb-ft. The tremendous figure of 925 lb-ft of twist from diesel unit makes this truck capable of towing up to 32,500 pounds or let’s say a small house, while 15,000 pounds from petrol offer is far from bad either since it is almost double the figure of Raptor’s capability.

On the other hand, those guys from Tuscon did fiddle with suspension, ending in mentioned lift and use of Bilstein shocks for a softer ride, while front axle is moved forward for better clearance. You can also opt for tuned exhaust if you wish a better music from big V8s. 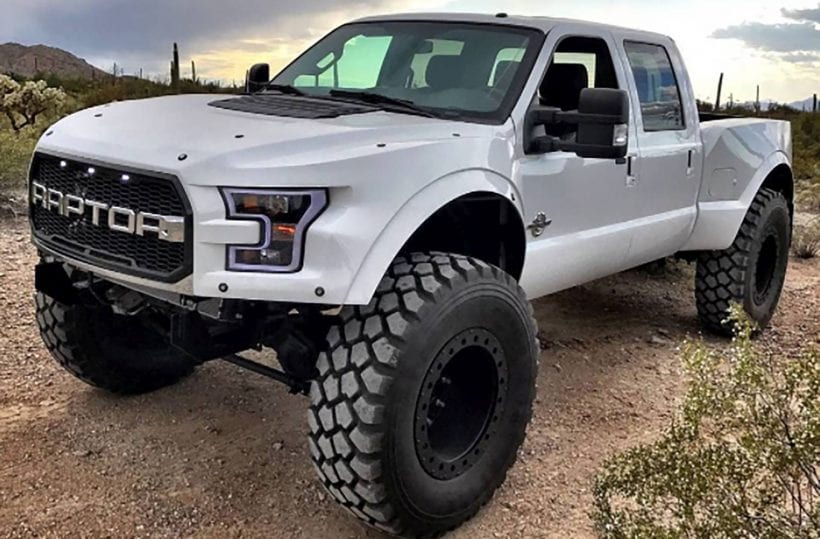 If you need F-250 but you yearn for F-150 prettier fascia, while moving Raptor on the street cause snapping of your neck, 2017 Ford F-250 MegaRaptor might be the only solution. You’ll keep all your immense payload and tow capacity while getting that fancy fascia and sinister Raptor look. It’s not an actual Raptor, so you can’t go “Baja way” with it, but no city or rural curb could stop it. Still, it doesn’t come cheap, costing you at least $60k.

$32k is a minimum amount of cash needed for new F-250 and conversion to MegaRaptor will take $28k more. But the same thing could be done with any Super Duty truck dating back to 2005 easing the cash side of it, while if you are already an owner of one of those, you now know how to go wild with it.