We recently wrote about Hennessy VelociRaptor and the text was full of superlatives, yet one thing was enough to spoil all the fun. It was six-figure price tag and hefty one indeed. What if you want something special, but you are not crazy enough to exchange your house for a special edition of common man truck. Take a look then at 2017 Ford F-150 Raptor and don’t be fooled for a second that it is just a mere scaled up version of F-150.

The new F-150 Raptor has both the looks and the performance of an excellent pickup truck. It can survive the harshest conditions, and it looks as rugged as ever.

Ken Block, the professional rally driver, had the opportunity to drive the new model which runs on a 3.5-liter twin-turbocharged Eco Boost six-cylinder engine. That powerful engine is good for 450 horsepower and 510 pound-feet of torque. 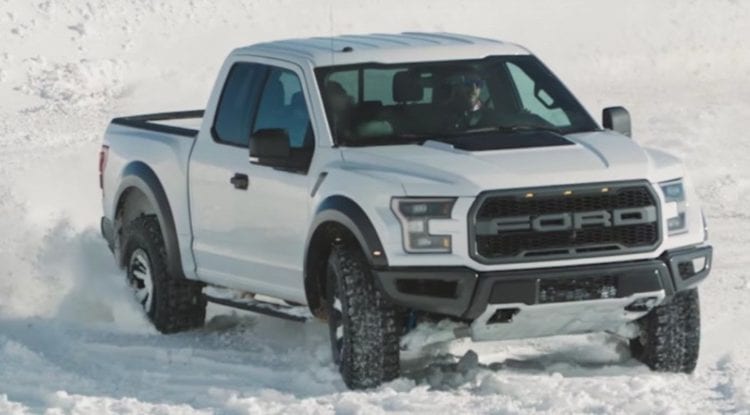 Ford decided to use the new twin-turbo V6 engine as they could tune it to produce significantly more power than the previously used powerplant. The outgoing model had a V8 engine and 500 pounds (226 kg) more than the 2017 pickup, so putting a more powerful unit to gain agility and versatility is not a bad idea at all.

Whether you find yourself in a difficult situation and have to rely on your vehicle to get you out of there, or you have to run an everyday errand, the new 2017 Ford F-150 Raptor can do it all. If you are not convinced, just take a look at this video.

LOOKS INSIDE AND OUT

Same as for the previous generation, Raptor has bad to the bone looks. Everything screams power, from the huge grille with enormous FORD letters and LED circled scary eyes, to huge black air scoop on the hood. It is sufficiently modified to prove its distinctiveness to regular version and justify the higher price tag.

Cabin received its treatment also, and all those Raptor logos, deeply bolstered sports seats with contrasting stitching, carbon fiber accents, contoured steering wheel with large paddle shifters, will all together act as elements of uniqueness. 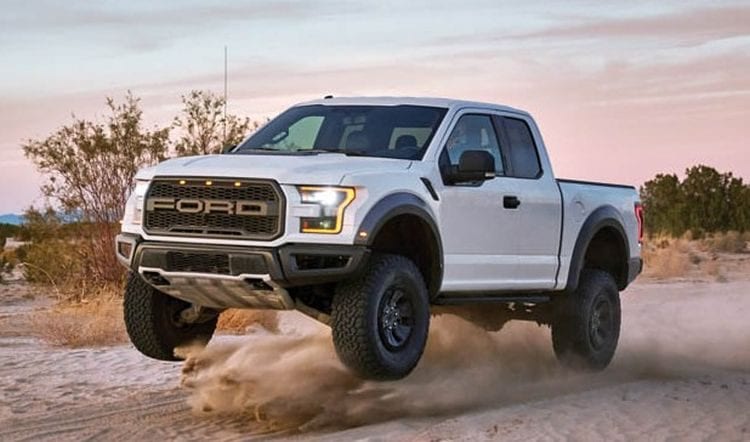 Expect the beast in this area and Raptor will deliver. Taken from regular F series 3.5-liter V-6 now pumps out 450 horsepower and 510 lb-ft of torque, which represent increases of 75 horses and 40 lb-ft over the standard EcoBoost version. Everything written is thanks to a new aluminum block, upgraded internals, port and direct fuel injection, lighter valvetrain and the turbos. Adding to that, it’s a fact that turbochargers whistle more boost, up to 18 psi, than the regular one.

Even compared to the previous generation’s 6.2-liter V-8 it hurls 39 horses and 76 lb-ft more, and that is making it noticeably quicker. Feel free to count on below a 5-second barrier for 0-60 time.

Weaker side to everything would be 10-speed automatic gearbox, which just has too many speeds. In normal mode, it is quite indecisive, and you have to go for Sport one, which makes shifting quicker but often jerky. The even slight release of the pedal pushes shifter to work really hard to choose right gear between too many available. Anyway, on the plus side, fuel efficiency is improved from old’s 16 to new 18 mpg highway.

Unbelievable, this hard-core, off-road truck with a body on frame chassis, could get away as a comfortable cruiser and twisty roads wouldn’t cause sickness as the absence of body roll is astonishing. Don’t worry, just mentioned the cushy side of it, didn’t intervene with its core. It is still an off-road monster. Take it out in nature, push the gas and it will just go through anything without any troubles.

The suspension can just receive incredible abundance of abuse without even breaking a sweat. Everything is due to the strengthened frame along with additional welds and fortified shock mounts. Fox dampers are now 3.0 inches in diameter, a 0.5-inch increase from the old Raptor’s, which allows 44 percent more fluid volume, bolstering heat and fade resistance. 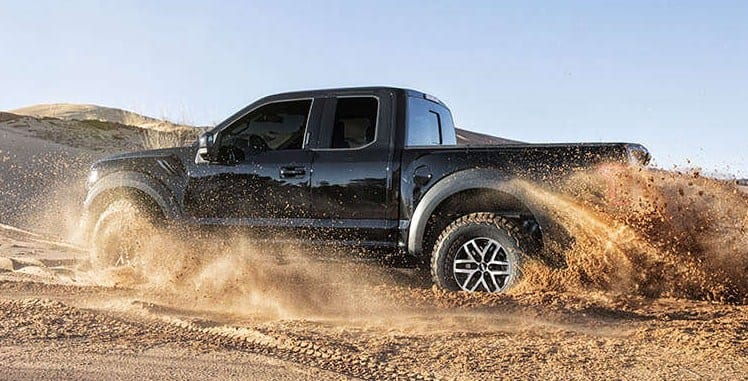 This would be Baja thing. Engage this, and ESP and ABS will retreat in shadow and intervene only to allow your head to stay on its shoulders. Turbo blades will keep spinning even if you lift your foot because you are going to get it back eventually and it will be ready to push your back to the seat, while shifter won’t change any gear as long as there are some rpm left to pound through. Just staggering.

However that may sound crazy, this car is everything. It can be a gentle cruiser, it is visibly luxurious, it can turn heads, it will rip apart many in the drag race, and in the end feel free to take it to the Dakar Rally. Price? Almost double than a regular one. But paying around $50,000 to get everything stated is just a plain bargain. 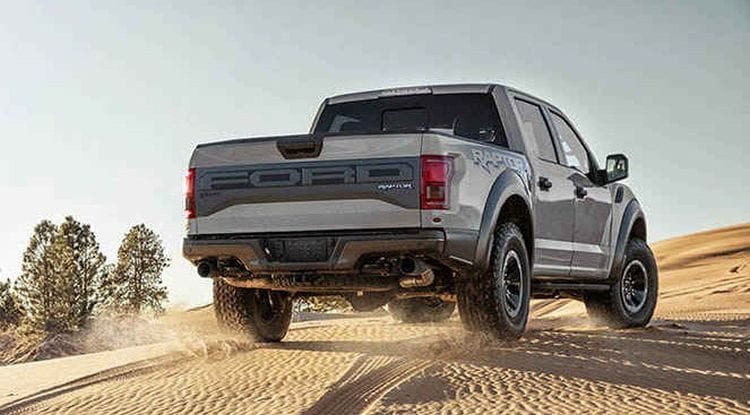