One particular vehicle which really stood out and proved to be a crowd favorite at the Detroit motor show, even amongst the supercars and hypercars, was the 2017 Ford F-150 Raptor SuperCrew. There have been lots of changes made to make this new generation F-150 even better than the old one, both on and off-road. Changes have been substantial and we’ll try to cover all of them, but to get us going we’ll start with: this isn’t fundamentally the same chassis as the old one. Yes, it’s still based on the regular F-150, but numerous modifications have moved it further away from that.

Good news for Ford fans in China as the 2017 F-150 Raptor will soon be available to them. Earlier, Ford revealed some information regarding their first official China export program as a part of which the Ford F-Series and F-150 will go to the Land of the Red Dragon.

Following the path of some Ford Performance vehicles like the Shelby GT350R, Focus RS, and Ford GT, the next-generation Raptor will hit the largest car market.

Ford Americas President, Joe Hinrichs stated, “Ford is one of America’s top exporters, and F-150 Raptor’s appeal and unmatched off-road performance has earned the truck a loyal following around the globe.” 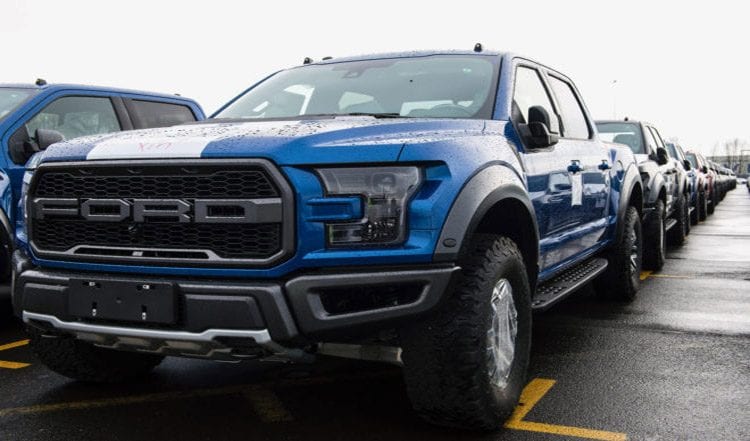 He also added, “Export to China enables us to bring a new group of enthusiasts into the Ford family.”

The facility where Ford manufactures the four-door SuperCrew is the company, Dearborn Truck Plant. The vehicle is powered by a 3.5-liter EcoBoost V6 that is good for 450 hp and 510 lb-ft of torque. The model uses Ford’s all-new 10-speed automatic gearbox. 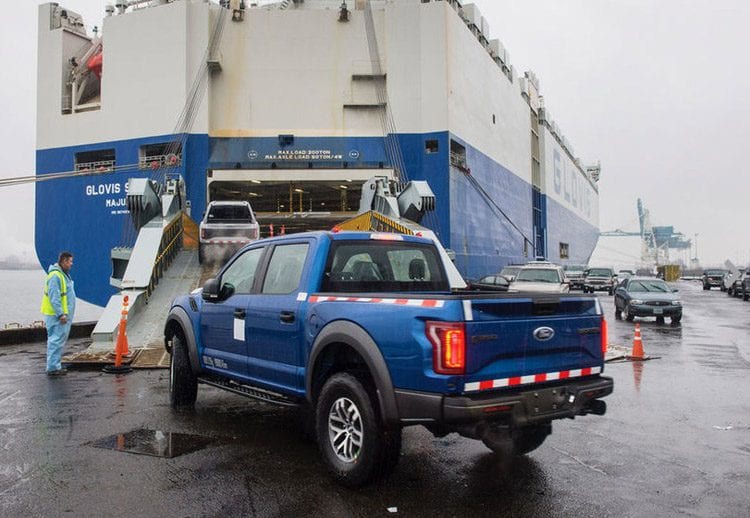 “F-150 Raptor is another example of our commitment to offer a wide range of vehicles for customers in China – everything from SUVs to high-performance cars and trucks,” said Schoch.

Among the features that Ford changed for the Chinese market, is the inclusion of the miniature roof lights that are a necessity if you don’t want to break the law.

Even though there are some additional costs like taxes, fees, and minor new features, we reckon that Ford will sell these vehicles in a jiffy.

Let’s get the less important stuff out of the way first. The F-150 still can’t be called beautiful. Striking yes, but beautiful no. It’s big, both in terms of width and length but it’s expected with such a large off-roader. The lines are aggressive and certainly draw attention, but there are no smooth edges or flowing curves. The mostly box-shaped design is even more accentuated with boxy head and taillights. 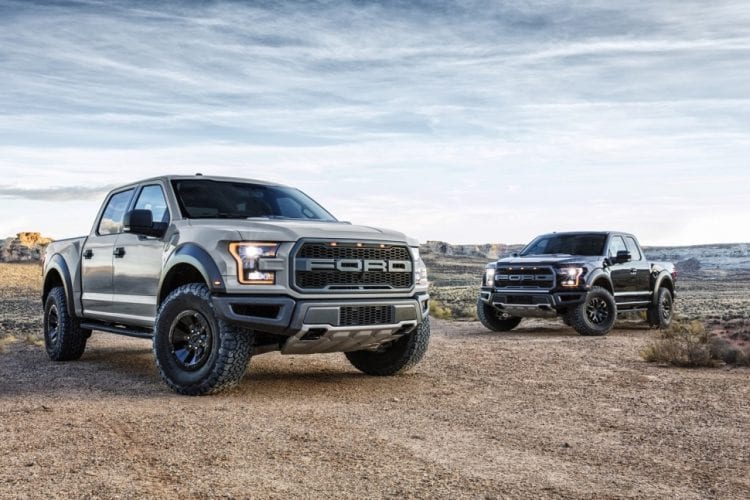 It’s fitted with massive off-road tires and the front of the car looks like something out of a transformers movie. There’s a huge grille at the front, with even bigger “FORD” writing on it. It’s still not anything spectacular to look at, but it’s a far cry from the first generation. It has a more menacing stance, there’s more concaved elements in the boxy shape, a giant skid plate at the front and optional decals.

There’s also extremely wide fender flares housing the massive wheels. It isn’t the best, but it’s more than adequate for what it is made for. Ford has done a great job of improving it over both standard F-150 model and previous Raptor versions.

Moving on to the inside where you’ll be spending most of your time with this car, we get mostly the same practical but plain interior as the one in the F-150. There’s deeply bolstered sports seats in the front, carbon-fiber elements here and there and a nice steering wheel with paddle shifters. 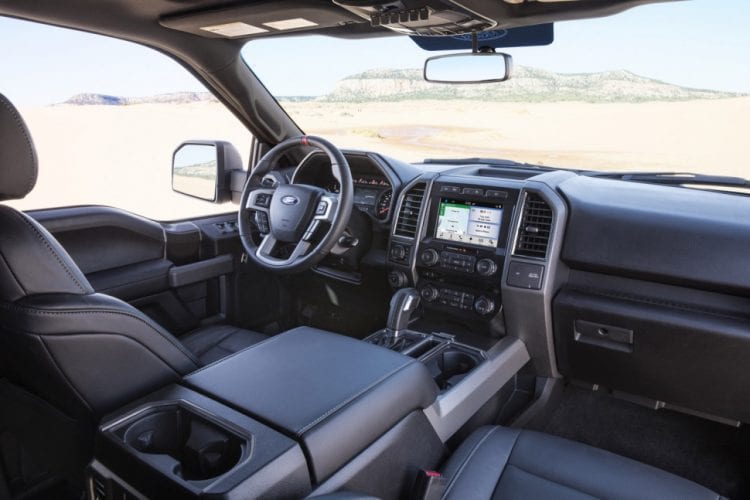 Lots of “Raptor” logos will certainly remind you’re not in a plain standard F-150 and the usual array of safety and infotainment bells and whistles come quite handy. Hey it may be boring, but it’s functional and everything is where you expect it to be. In a car such as the F-150, it’s all that matters.

Now we’re finally getting to the good part. Or is it the bad part? Ford has ditched the 6.2 liter V8 in favor of a 3.5 liter EcoBoost engine. Yes, that’s right, you read it correctly. EcoBoost. While it may sound as a letdown before you close this tab with anger, remember this, the new engine is noticeably lighter than the iron-block V8 in the old one. It’s Ford’s second generation engine and features twin-turbochargers as well as direct injection.Expect it also to be more fuel-efficient and reliable. 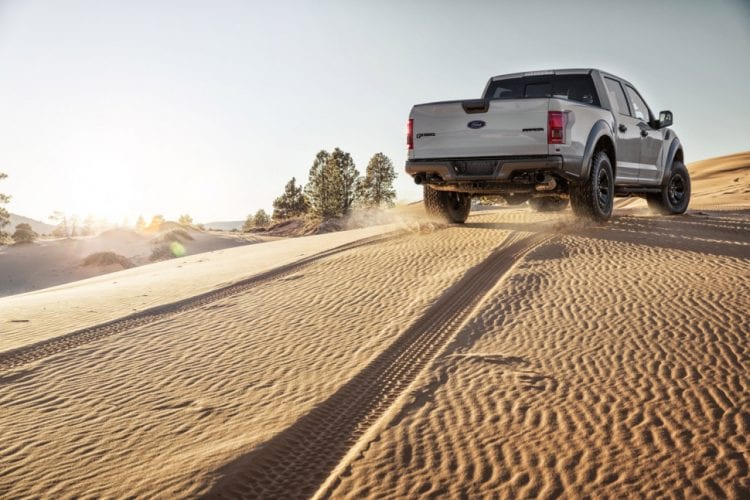 It’s also much more powerful but no power figures have been announced yet. Considering the old V8 produced 410 horsepower, a realistic power figure for the new one shouldn’t be below the 450 horsepower mark, although it would be a nice surprise to see the Raptor with output somewhere in the region of 500 ponies. This would surely drop the current Raptor’s 0-60 mph time of 7 seconds to low sixes, or even in the high fives.

Ford’s claims are that the 3.5 liter V6 unit has had development influence from racing engines (GT maybe?) and the engine has an aluminum block with an upgraded fuel system as well as stronger internals. Because it’s a much more powerful and free-breathing engine, the fitment of a true dual-exhaust system really makes all the difference. The beastly engine sound of the V8 will surely be missed, but knowing Ford and how modern day V6’s sound, some popping and crackling on the overrun will be standard.

Something new to Fords, and we mean every Ford in history, will be the introduction of a 10-speed automatic transmission. Significant improvement, a 10-speed auto will be mated to the V6 powerplant in the new F-150 Raptor. It may sound like a lot of gears, but it improves efficiency, fuel consumption, and off-road capabilities simply because you have a lot more gears down-low to choose from allowing the engine to always spin in the ideal rev range.

The new four-wheel-drive transfer case works in conjunction with the terrain mode system to figure out the right settings for the truck during driving. It’s controlled by buttons on the steering wheel and it adjusts engine, stability control, brakes and powertrain characteristics based on whether you’re driving on mud, sand, snow, etc.

Speaking of terrain, the new Terrain Management System gives you 6 preset modes to choose from: normal mode for daily driving, street mode for sportier driving, weather mode for snow, ice and even rain, mud and sand mode for the mentioned surfaces, Baja mode for desert running and rock mode for rock crawling. An incredible number of choices and mode for almost every situation guarantee that you will go pass pretty much any obstacle.

On and Off-road Capabilities 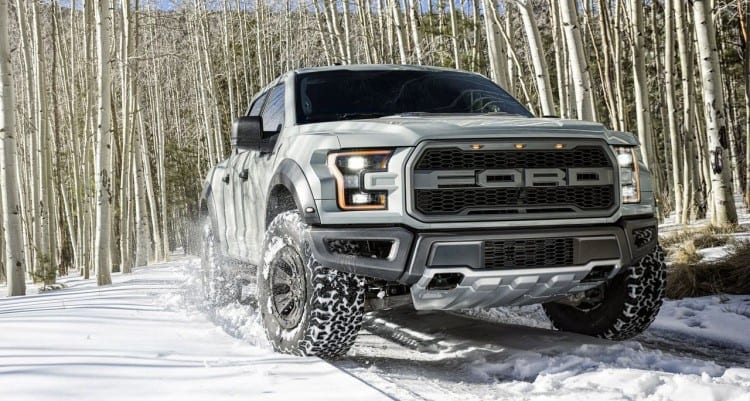 The custom designed and built shocks have bypass technology that smoothes out the bumps and prevents bottoming out, meaning not only are you safe to go off-road, but there’s next to no danger of abusing the truck because it was designed for it.

The F-150 Raptor fully-boxed frame has been custom built and is even stronger than the normal F-150’s. Wheel size is 17-inch and they’re rolling on BFGoodrich All-Terrain KO2 tires designed for off-road use. There’s no denying the fact that this is one durable truck capable of tackling anything you throw at it.

There are two versions on offer, the SuperCab with a shorter cabin and the SuperCrew with a longer and more practical cabin. Prices aren’t announced but expect them to be priced a bit higher than the standard F-150 but below the SVT Raptor.

At this point, rumors suggest price from $50,000 to $53,000 but we will wait a little bit longer to hear the official statement. The truck will go on sale this fall and expect most of the vehicles to be sold out almost immediately.