We just recently wrote about Marchione’s 5-year plan for FCA group, and its commitment to feature new Ferrari model every eight years, with mid-life refresh right in the middle of the way. Since the F12 model was introduced in 2012, a deadline has been obviously breached, as usual with Italians, but masked test mules of redesigned model are among us on the roads.

Since we already wrote about upcoming changes for F12 M model, we think that current 2017 Ferrari F12 Berlinetta also deserves to receive special attention as it will be here until the newcomer arrives. 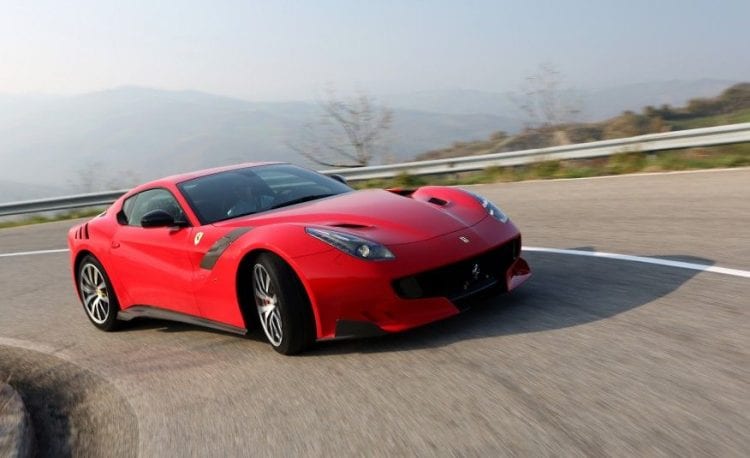 Let’s make one thing clear from the start. All Ferraris are beyond just beautiful, and none of the models needs refresh during the lifespan, and most of those could carry along with no problems if next generation misses its due date. Same goes for F12. Without any doubt 599 GTB was gorgeous, but F12 took things to whole another level. A bespoke mixture of Italian elegance and passion can be hardly matched by any rival, and that is the reason why Lambo chose madness instead. This is also GT car, and the interior shows it.

Everything is drenched in highest quality materials with visibly stitched leather all over the place, but also increasing your heartbeat with F1 inspired steering wheel which houses famous manettino knob. Also, F12’s cabin is more racing oriented, missing large dash screen among else, than one in GTC4 Lusso which plays more on GT card even allowing four persons inside of it.

If F12 Berlinetta is beauty, its TDF version must be the beast then. And it is! It’s not just slightly altered Berlinetta, it shows instantly that it is a mean and evil side of it. Racing-oriented front bumper chose mashed grille instead of elegant slats while hips appear as clawed by some beast, creating air intakes in the place where they weren’t available before. Apart from tail lights, rear end is totally changed, easily rivaling Lambo with its visual madness. In this case, former beauty forcibly mutated to a beast, making a clear statement to everyone when it surpasses them on the highway.

Lots of carbon treated parts all over the body will seal the deal about wild nature of this F12. As for the cabin, here it’s all about the speed, so forget about armrest, glovebox, stylish door panels, sculptured seats and leather while you should start getting used to Alcantara and harsh racing buckets.

Both the beauty and the beast share same heart, it’s just the fact that it pumps in a different manner inside their chests. We are talking about 6.3-liter V12 engine delivering 729 horsepower and 508 pound-feet of torque in beauty, making it enough for a sprint to 60 mph in 3.1 second and capable of reaching 211 mph. As for the beast, the heart is obviously pumping much harder, as it boosts 769 hp and 519 lb-ft of torque, capable of reaching 8,900 rpm, 200 more than beauty. Beast takes one tenth below 3 seconds to 60 mph and goes 4 mph more where beauty stops.

In its case same 7-speed dual-clutch gearbox shifts up in 30% less time and even 40% less when it shifts down. It borrows its brake calipers from the biggest daddy of them all, LaFerrari and rear wheels can steer with Virtual Short Wheelbase system. To be clear, F12 Berlinetta is fast car everywhere, on the highway, on the back roads, even on the track, but TDF is just tearing apart any pavement that it comes across as some wild, angry animal – hence the beast.

We know that revised F12 M model should arrive during this year, but if you want your Italian supercar now, just go for 2017 Ferrari F12 Berlinetta, it is more than perfect. Don’t be bothered with over $320,000 starting price, it will fulfill your every dream, and it will scare the hell out of you in TDF version costing near half million dollars. But many people do watch horror movies, don’t they?