Ferrari 488 GTB was revealed in 2015, replacing stunningly looking and seriously quick 458 Italia, which needed no replacement at the time. Many argue that Italia is still better looking than GTB, but GTB had other intentions. It created an earthquake in Ferrari land by introducing turbocharged 3.9-liter V-8, which replaced the iconic, naturally aspirated 4.5-liter V-12.

Adding turbos surely angered lots of fans, although many of that anger dissipated with new figures as 670 hp replaced 570 hp and acceleration time dropped down from 0.4 seconds to 3 seconds flat. Turbo is a new era, bringing bigger power and less demand for fuel while costing us astonishing sounds and cool torque-power build up. Same as it was with 458 the 488 received a convertible version, Spider, as well as two racing variants for international motorsport series, GTE, and GT3. The only guy that was left without clear successor was 458 Challenge, and we can proudly welcome new 2017 Ferrari 488 Challenge now.

The year 2017 is the 25th anniversary of Ferrari Challenge which was established in 1992 and has been, since mentioned date, giving Ferrari enthusiasts the opportunity to drive their sports cars on race tracks, competing with other similar car lovers. It is in short amateur racing for drivers who are seeking for interesting hobby or have professional racing aspirations but are not quite there. So far, through the history, you could race Challenge versions of the 348, F355, 360, F430, 458 and now 488. 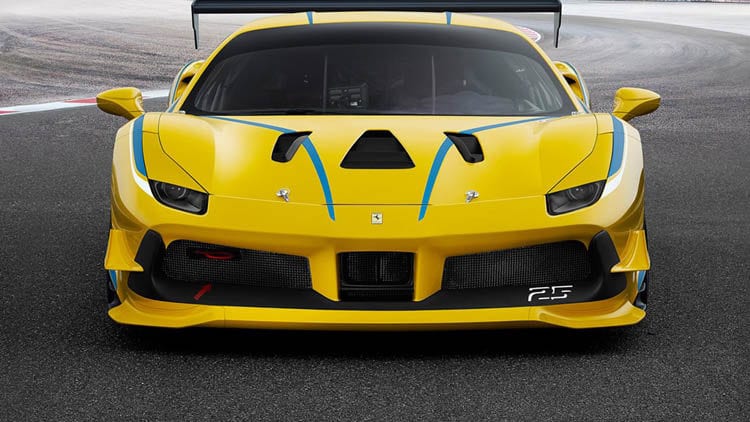 Previous Challenge version cost around $300,000 so expect rise this time of maybe $50k more and since participating in the whole season takes additional $200,000 expect to be slimmer by half million to afford this kind of pleasure. There is competition for this kind of games for rich as Lamborghini offers Lamborghini Huracan Super Trofeo Series with honor to race around in Huracan‘s. On the other hand, Porsche 911 GT3 Cups organized by Porche gives you the opportunity to throw around upgraded 911 GT3 Cup, but unlike previous two, with the purchase of the same car, you can additionally participate in Porsche Mobil 1 Supercup and Porsche Carrera Cup North America among a total of 20 race events.

Ferrari 488 Challenge is essentially 488 GTB fed with steroids. It is poised for extracting best lap times, so every upgrade and every loss are in search for that goal. 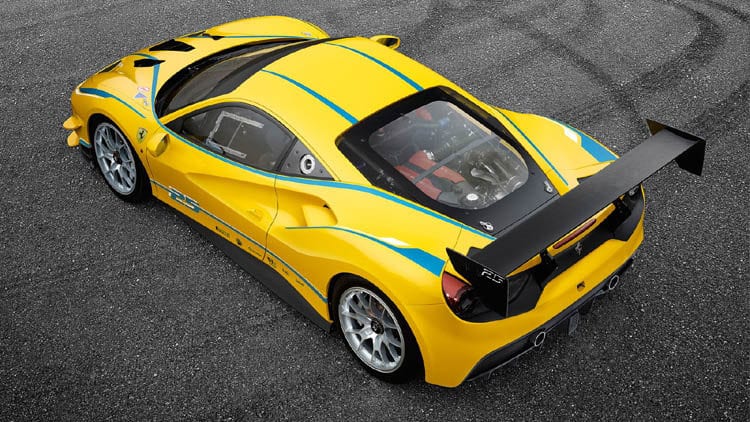 In that manner the front radiator layout was reworked, we have added winglets at each corner of the splitter, as well as on each side of the bumper, new triple vent design on the hood, door windows have been replaced by lightweight plastic panels alongside race-spec fuel cap. Around back, modifications include mesh grilles for the taillights outlets and diffuser and massive carbon-fiber wing. In total everything above increases overall airflow and downforce efficiency by seven percent.

Cabin is totally race oriented, so charming dash is replaced with huge, ugly panel with buttons and rearview camera so you could see what is happening around you. 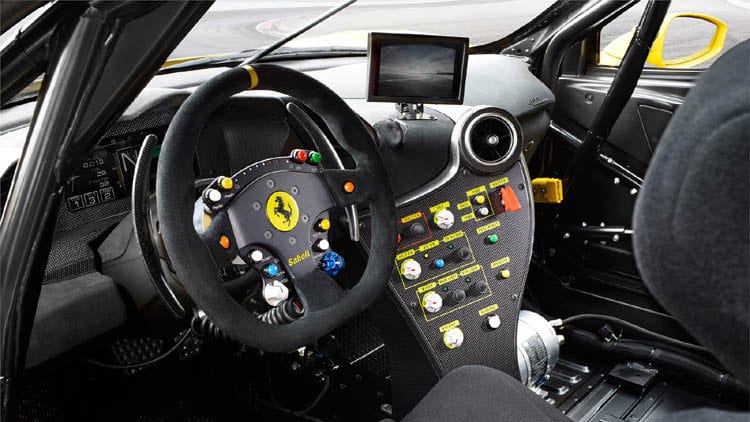 Door panels are gone, there is only one seat in racing spec and same as wheel it is wrapped in Alcantara for better grip while the shifting paddles are doubled in size.

There is no. You read it right. Same 660 hp is still here. You know there will be “but” and it is in the form of specific engine mapping optimized for increased racing performance, shorter gear ratios giving up to an 11.6 percent increase in acceleration out of turns and new racing shift strategy for the gearbox.

Among other improvements we have 28 kilos of weight loss, Slip Angle Control software improving the longitudinal acceleration through bends by 4.2 percent and decoupling of the manettino function for more precise optimization. If that sounded like a bunch of crude, uninteresting facts, this will not, as Challenge version is quicker around Fiorano track by earth opening 8 seconds from standard GTB, without even one additional horsepower. It is even faster than Laferrari by four seconds and only second slower than FXX-K. It’s majestic.

There is no usual conclusion here, as comparing it to the competition is pointless, since it is reserved for brand fanatics. New 2017 Ferrari 488 Challenge brought our way enough improvements to host brand’s racing games proudly and in short who ever has big enough wallet can come to “play”.