The Citroen C4 Picasso is one of the best mid-size MPVs currently on the market. We also think it is the best Citroen’s model at the moment. They managed to spice the dull MPV market with an interesting and futuristic looking vehicle. It’s one of the most spacious cars in its class, especially if you go for the 2017 Citroen Grand C4 Picasso version which we’ll be discussing here. MPVs are not that common in America since everyone uses large pickups or SUVs, even as a daily drive. But in Europe, the streets are much narrower, the fuel is more expensive, and the paychecks are smaller, so it only makes sense that small diesel cars are the way to go. 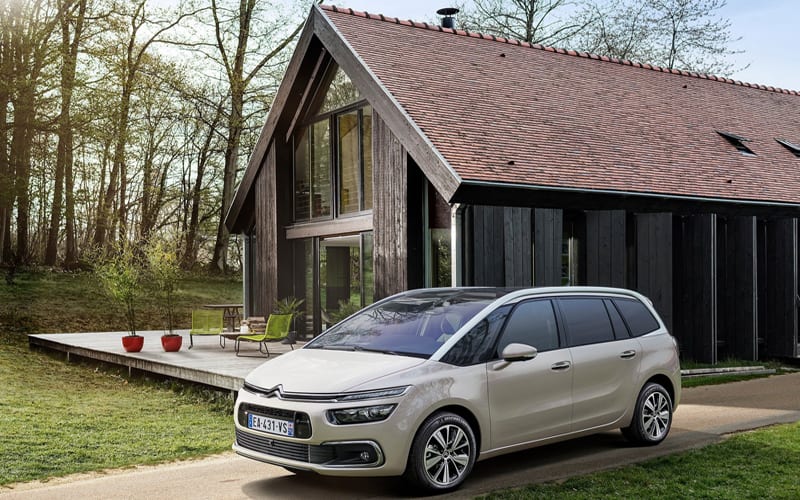 The Picasso name was first used in the Xsara back in 1999. The Xsara kick had started the entire MPV trend before people were even hot for them. In 2006 as the segment grew they decided to transfer the platform and name to their more popular C4 model. The first generation of the C4 Picasso had lasted for around seven years before it received an update in 2013. Since then, it has won more than a dozen Best MPV prizes from various car review magazines and companies.

We immediately have to say that the exterior is interesting, but it’s nothing when compared to the super futuristic interior. The 2017 Citroen Grand C4 Picasso is mainly meant for larger families who have up to seven members, and this vehicle is capable of transporting them in perfect comfort. 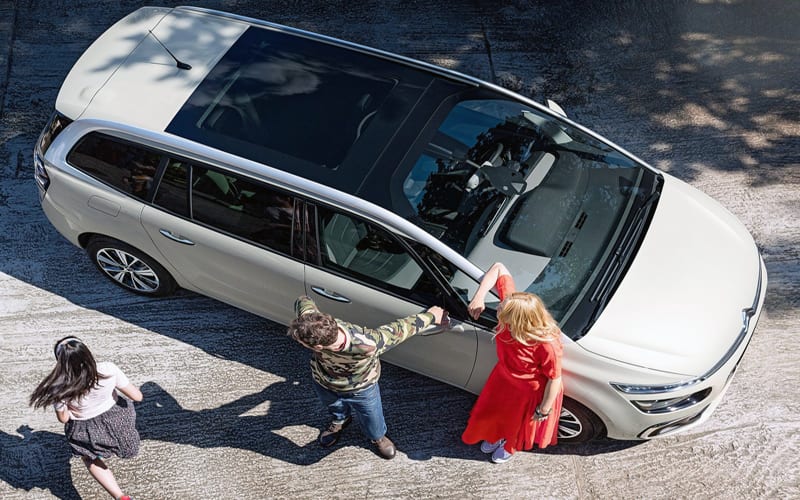 The trademark feature of Citroen is noticeable once you start driving. The ride is super smooth and comfortable; it’s almost like you’re floating on a cushion of air. The 2017 Citroen Grand C4 Picasso manages to maintain the company’s reputation as it’s easily the most relaxed and comfortable vehicle in its segment. There’s next to no road, engine and wind noise at any speed. It’s great around the city, but it shows its merits on the motorway. It’s comfortable and spacious, especially if you go for the Grand version. It adds two more seats for the rearmost row, but they’re mainly meant to be used by smaller children. An adult will have a hard time fitting in or even sitting down for that matter. There’s simply not that much legroom. For kids, however, it’s perfect. 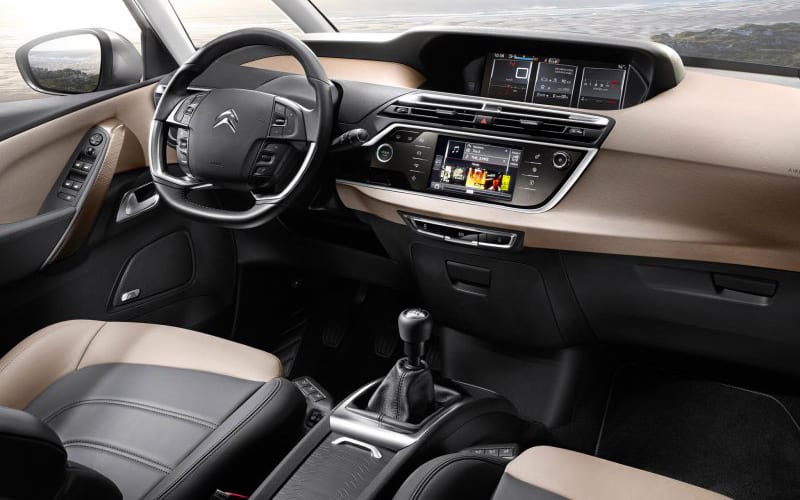 The biggest criticism for the Grand C4 Picasso comes due to its dynamic capabilities, or the lack of, to express it better. Although it’s good on the highway, the corners aren’t its friend. It exhibits way too much body roll thanks to the soft suspension and the steering wheel is less than communicative. It’s perfect for just driving around; it’s precise, and you’re in control of the car at all times, but you don’t feel that connection. The gearboxes don’t help in the case with their notchy feel and less than smooth action. We need to stress out that this vehicle is not made for enthusiastic driving, and the buyers that need a family car will need to cope with this.

The rivals are much better in corners, especially Ford’s in segment competitor, the C-MAX. You do get a trade-off, however. Ford may have the performance on its side, but it lacks the things the Citroen gets as a part of that. It’s not as comfortable nor is it as good at isolating you from everything when on a commute. It’s not as relaxed to drive too. The visibility is good thanks to the thin A-pillars and the large glass surface, even on the sunroof. 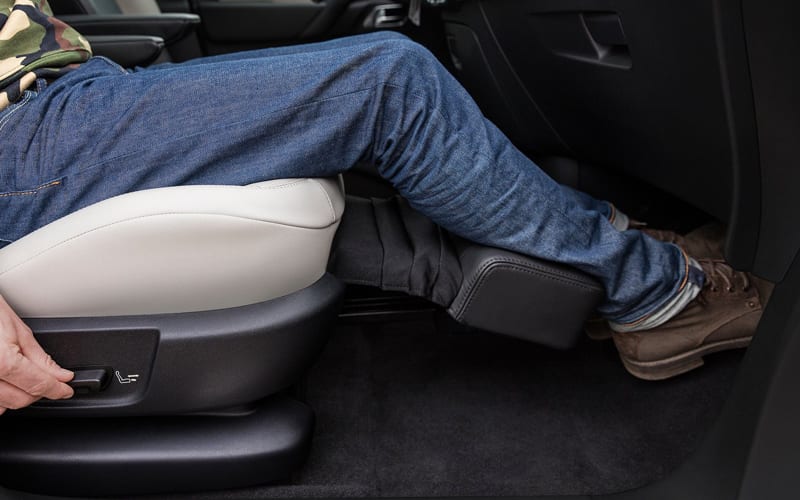 You have a lot of engine choices as well. There are a few petrol and a few diesels on offer, more than enough for most people. The smallest petrol is a three-cylinder 1.2-liter turbocharged unit producing 128 horsepower. It may be small, but it’s one of our favorites. It is an engine we consider to be the best out of the entire range. If you specify it with the PureTech model in VTR, trim you get the cheapest C4 Picasso. It’s more than enough to pull the large Grand C4 Picasso along. It will also get the car to 62 mph from the point of rest in about 10.2 seconds, second only to the most powerful petrol and diesel.

The first diesel on offer is the 1.6-liter BlueHDi 100 developing about 98 hp as the name suggests. Citroen says it is Europe’s best-selling engine, and we can see why, but we don’t know why people don’t go for the most potent version of the same engine. The 100 is economical, yes, and it gets very low CO2 emissions, but it is so slow you’ll have cars from 20 years ago honking at you. It takes 12.8 seconds to get to 62 mph. A number that was acceptable some ten years ago, but not now. Because you will be pushing it harder, you’ll also make it louder and less refined so keep that in mind. 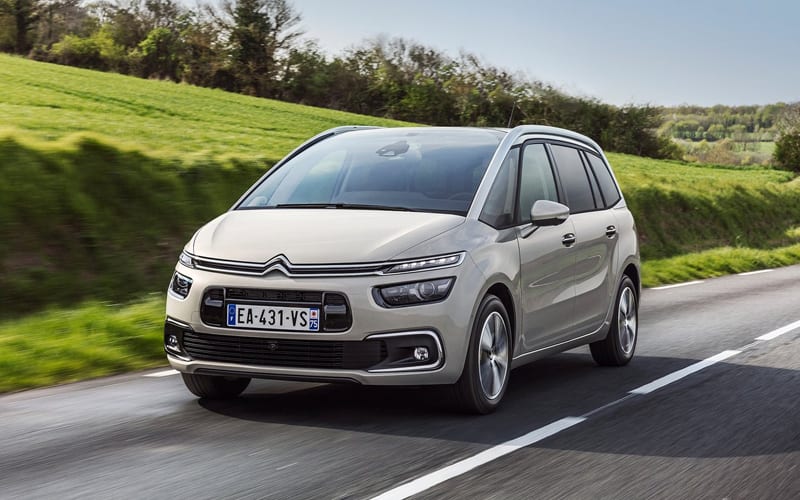 The same 1.6-liter diesel is available with 118 horses. The 20 hp increase may seem dismal and not noticeable, but when you’re behind the steering wheel, we can guarantee it’s easily felt. The sprint to 62 mph drops by 1.4 seconds to 11.4 seconds, but more importantly you won’t be over-stressing this engine by constantly putting it under heavy load.

The flagship diesel produces much more respectable 148 horsepower. The unit developing that power is a 2.0-liter four-cylinder called the BlueHDi 150. It is less economical when compared to the 1.6 engines, but that’s to be expected. It is, however, much faster and more refined. Expect to hit 62 mph in just 9.7 seconds. Rather quick. 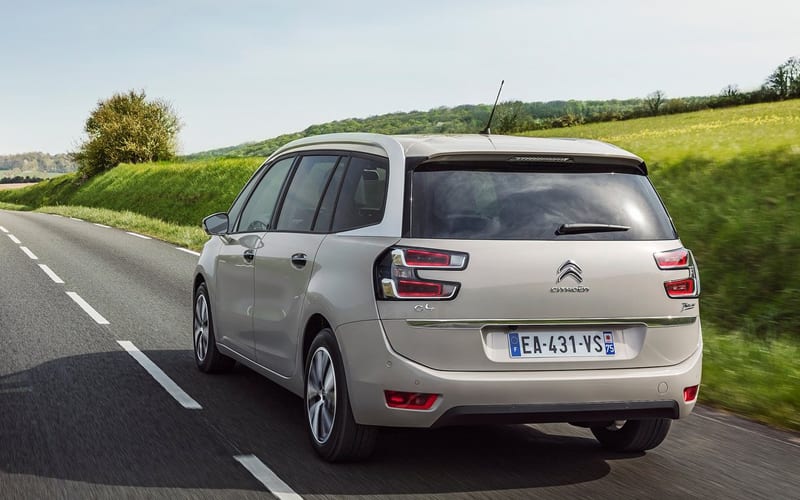 The fastest variant is undoubtedly the 1.6-liter petrol developing 163 horsepower, which also happens to be the most powerful option in the lineup. It will get the 2017 Citroen Grand C4 Picasso to 62 mph in 8.5 seconds. The bad thing is you can only get the sportiest 1.6 unit with an automatic transmission exclusively. This spoils the fun a lot for people who want a manual.

If you’re in the market for a midsize seven-seater, look no further. The 2017 Citroen Grand C4 Picasso is probably your safest bet. It’s got everything you want from an MPV: space, comfort, speed and practicality. The fact that it starts at less than 20,000 pounds is a great bonus too. With added options that we have this price can easily go up significantly but then again it will be one of the best people movers in the segment. 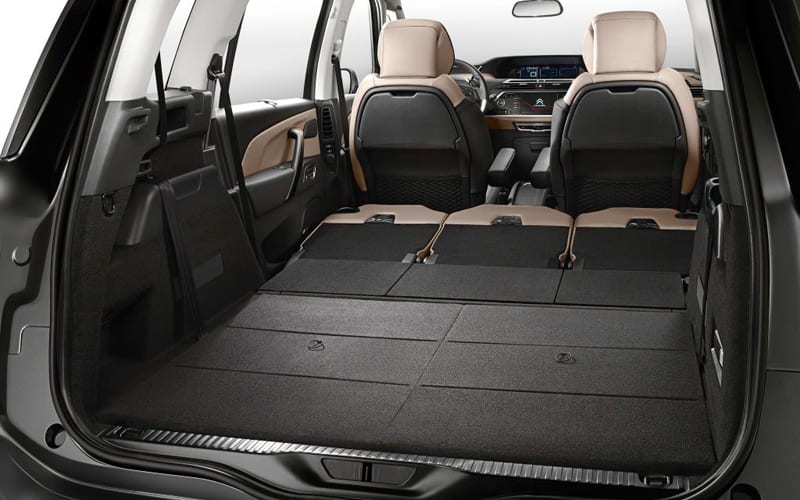 Check out the video review of 2017 Citroen Grand C4 Picasso by Mat Watson.