Hatchbacks popularity has been on the rise in recent years, and we’ve always claimed that they’re among the best types of cars to own. Something between a small city car and a sedan. Not small and not large. Just perfect for daily commuting or even longer journeys, and it really doesn’t matter if you take 4 other people with you, because it seems nothing troubles the modern-day hatchback. A new competitor from Chevrolet is the Cruze hatchback for 2017. Well, new for the U.S. at least.It’s already been on sale in a couple of markets all around the world but the recent popularity of hatchbacks in the U.S. meant that Chevrolet felt the Cruze hatchback finally made sense in this large-car-loving country.

For those not familiar with this vehicle, it is Chevy’s best-selling global vehicle. It’s manufactured in a few different places and sold in a lot of markets and countries throughout the world. The new 2017 model rides on the same underpinnings from the 2016 Cruze but with a restyled and updated look. The design follows Chevy’s current design vision, and the chassis from the second-generation Cruze is exactly like the old one, reliable and superb.

We have to say, the hatchback is much more appealing, appearance wise, than the sedan version. With its sawn off the rear end it really does look sportier and more aggressive, but by no means too overwhelming. It’s a pleasant design to look at, the smooth body lines starting from the front and running all the way to the back. It’s an undisrupted style and one we’re pleasantly surprised by.

The front looks the same as the sedan version, but the rear is different and even better looking. It looks elegant and smart, but at the same time sporty. The addition of the top spoiler just above the rear window is a nice touch and one that fits the overall look nicely. All in all, a very handsome car, and one that strikes fear into its competitors.

If we’re completely honest, the only downfall to the car’s design is the rear tail lights which look like the ones found on a Kia or a Hyundai. Not that there’s anything wrong with that, they look great, but they remind you of those other brands and we are sure that Chevy wants to offer a unique design. Perhaps they could have tried just a bit harder on that particular design element alone, everything else is great.

The hatchback version doesn’t come with the L and LS trims as found on the Cruze sedan. Instead, the basic trim is the LT and the top-level trim is the Premier. No basic equipment for this hatchback, only the good stuff will do. The Premier is fitted with sporty looking 18-inch wheels that further enhance the car’s looks. There’s even an RS package which adds new front and rear section parts as well as a different rear spoiler further enhancing the aggressive looks.

Inside, not a lot has changed and nearly everything is carried over from the sedan version. That’s good news for consumers because the materials in the second-generation were not only a massive jump over the first-gen car but class-leading too. Hard plastics and rough surfaces are a thing of the past, and everything you touch feels soft and pleasant in the 2017 Chevrolet Cruze.

Unlike a lot of its competitors that feature lower-spec trims with manual controls for the windows for example, or are lacking tech, the Cruze has it all. From power-operated everything to the latest tech in infotainment segment. The seven-inch display touchscreen is something that we usually get in a higher class of vehicles but it is also available here and it’s showing Chevrolet’s MyLink system. This is an infotainment system developed by Chevy which incorporates your Apple CarPlay or Android Auto, the Bluetooth and even the car’s audio. Like in most modern cars, there’s wireless charging for phones with such a feature, nice addition to the entry-level compact car.

There’s now a TFT display in front of the driver, just behind the steering wheel showing important information like speed and vital car details. This is something you’ll be using all the time because the analog speedometer is ridiculous. It shows the speed reading in increments of 20 miles per hour and there is an optimistic 160 miles per hour end scale, more than hard to reach. Not only is this taking up the room it shouldn’t, but the way the speedometer measure the speed on the analog gauge is really annoying when you see it you will understand what we are talking about. This is a minor deficiency and we are sure that it will not steer a large number of customers from this brand.

The front is excellent for both driver and co-driver. The seats are snug and supportive, not to mention comfortable and the driving position is great. The pedals are right where you want them to be and the steering wheel offers infotainment buttons enabling you to keep your hands on the wheel at all times.

The rear seats are not bad either. There’s plenty of space even for three adults although we wouldn’t recommend it for longer journeys. Headroom and legroom are plentiful despite the roofline taking up an inch of headroom. Behind the second-row of seats, you’ll find a respectable boot offering a very decent 18.5 cubic feet. If you take the rear three seats down you get an even more impressive 42 cubic feet.

Under the hood, you’ll find the familiar 1.4-liter four-cylinder sporting a turbocharger. It’s got an aluminum construction this time rather than an iron one. This saves weight while adding power and reliability. Direct fuel injection is standard as are four valves per each cylinder and there are new internal engine components with lower friction percentage than ever making it more efficient. This also frees up the engine and makes it even more rev-happy.

This results in 15 more horsepower and 28 more lb-ft of torque, totaling 153 hp and 177 lb-ft of torque. More power doesn’t always equal to more fuel consumption and this engine proves it. It returns 32 mpg in city thanks to start/stop system and 40 mpg on the highway with really good six-speed manual or six-speed auto which is even better than before.

There’s a big possibility that there will be a turbodiesel in the engine offer too, probably in the form of the 1.6 four-cylinder. Even it comes offered with diesel option it will be interesting to see if it would make to the North America Shores. It certainly would be great to have this as an option also. 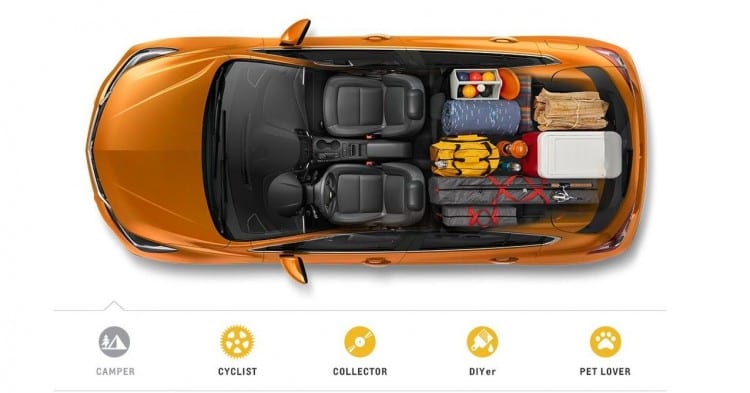 For now, the 2017 Chevrolet Cruze seems like a very good option on the market. It’s a practical, good looking, fun-to-drive and economical car with a price tag of around $17,000 for the base model and $24,000 for the range-topping one. Don’t forget, the 2017 Cruze hatchback’s base trim level is most cars’ mid-range trim, so we advise you to compare offered features with other players on the market before you choose.