The ZL1 name was long gone and vanished, and we all thought it was forgotten until Chevrolet decided to surprise us in 2012 with the Camaro ZL1. Although it wasn’t equipped with a naturally aspirated engine like its predecessor, the supercharged top of the line model was the answer for everyone looking for the ultimate muscle car. It was a direct rival for the Shelby GT500, and in many areas, it trumped it completely. Well, at the 2016 New York Auto Show they officially unveiled the 2017 Chevrolet Camaro ZL1 Convertible. It’s the same ZL1 model but instead of a fixed metal roof, there’s a canvas one. At the moment, the ZL1 is the only supercharged convertible from the “Big Three” to be sold like that stock from the factory. Not only that, but it’s the only track-ready convertible to come out from the Detroit, as both Dodge and Ford are lacking comparable versions of the Challenger and Mustang respectively. 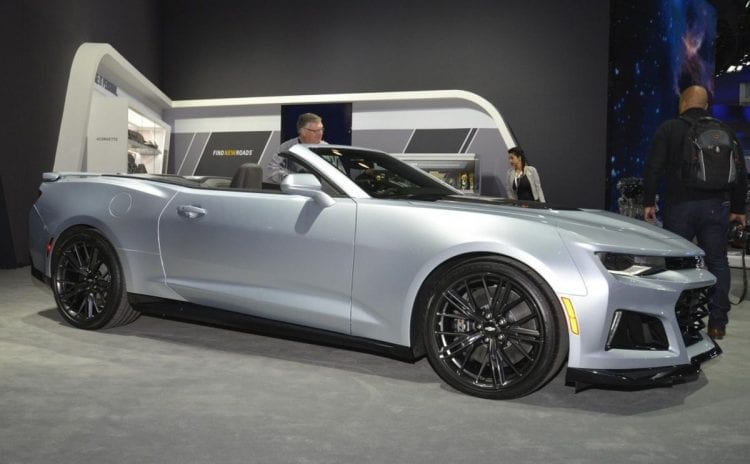 The exterior styling is unsurprisingly borrowed from the had-top ZL1. This means that it makes a large departure from the old Camaro convertible; this is mostly because it’s a lot smaller just like the Coupe ZL1. The reason behind this is that Chevy wanted to bring it closer to a more traditional sportscar and that obviously included traditional dimensions in this segment. This moved it further away from a standard muscle car, at least when it comes to size, and bring it more into European performance coupes territory.

The styling, however, hasn’t been compromised. In fact, this is one of the most aggressive Camaro models to date. The headlights are meaner looking; there are larger bumper openings on the front, a more muscular and well-defined hood and a sportier rear end with taillights inspired by the first generation Camaro. As a standard, we are also getting large exhaust outlets that give you a good insight into the power of this vehicle.

Speaking of menacing look, the front of the ZL1 is probably one of the meanest front fascias of any car currently on sale. It’s been totally redesigned and is a carryover from the coupe. There’s a bigger intake located under the relatively slim grille as well as larger and redesigned cooling ducts. The daytime running lights offer LED technology and the grille pattern for both of the front openings is new. The fenders are of course widened and the hood is vented (made of carbon fiber to reduce weight). This adds another layer of differentiation from the SS version making it a lot more extreme. 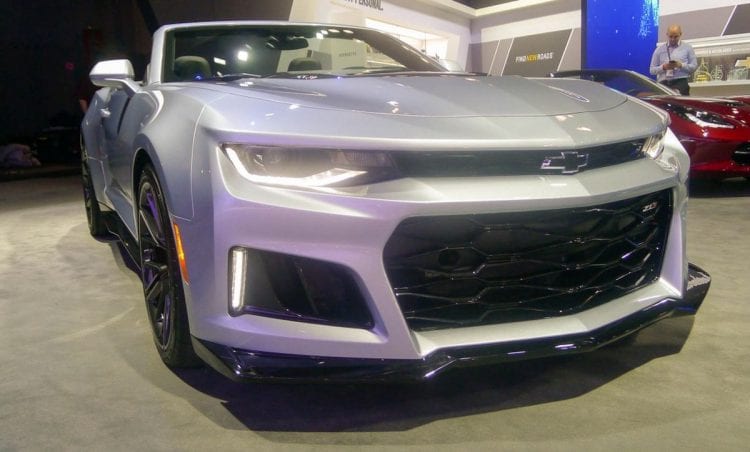 The side skirts are black, and so are the new wheels, which are now lighter than ever. You can immediately tell that the car is lower thanks to a new suspension setup. The concaved shape in the bottom of the doors and arches is nice and completes the entire side profile, which looks like it means business.

Around the back, as mentioned you get the newer taillights which are inspired by the first generation Camaro and in our opinion, they’re way better than the old separated blocks that were installed. There’s also a larger diffuser plus a larger exhaust pipes, add a trunk lid spoiler which offers aesthetic and practical purposes too and you get one unique and sporty vehicle.
The convertible’s party piece is obviously the soft-top. It’s fully automatic ad you can’t even tell where it disappears when you put the roof down. Interestingly, you can lower it or raise it at speeds of up to 30 mph, making it perfect for traffic jams for instance. No word on the time it takes to get it folded, but it should not take a lot of time; somewhere between 15 to 30 seconds. 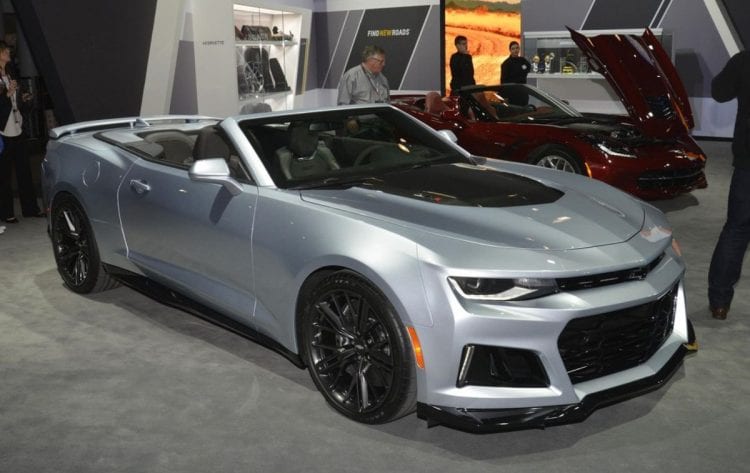 There’s not a whole lot different when it comes to the interior of the ZL1. It’s identical to that of the Coupe ZL1 which isn’t a surprise. That’s not a bad thing, however, as the ZL1 has one of the best interiors of any Chevrolet models currently available. It’s similar to the SS but with some extra features to distinguish it and make it less ordinary. Overall opinion is that Chevy managed to bring improvements to already good setup. 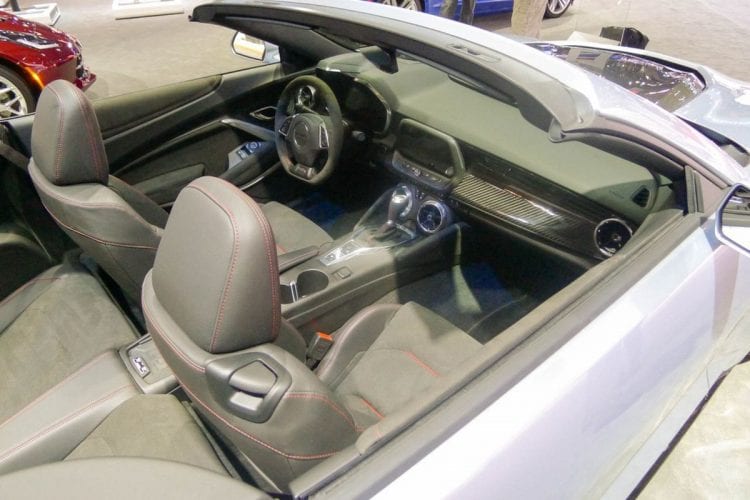 For instance, the steering wheel has a flat-bottom design, the shift knob is wrapped in suede, the front seats are Recaro’s sports seats with “ZL1” stitched into them, and there’s a unique infotainment screen. Elsewhere you’ll find contrast stitching and aluminum inserts separating a black interior which would have been dull without those accents.

The infotainment screen we mentioned is placed noticeably higher on the center console which makes for a much cleaner and more ergonomic center stack. The controls for the heating are neatly integrated into the same rings which surround the actual air ducts. This isn’t just the sportiest-feeling Camaro to date, but the most luxurious too. Okay, so the interior is still not up there with the Germans, but it’s getting very close. This is a car we wouldn’t mind spending a lot of time in, especially on sunny days when you can roll the top down and just cruise. 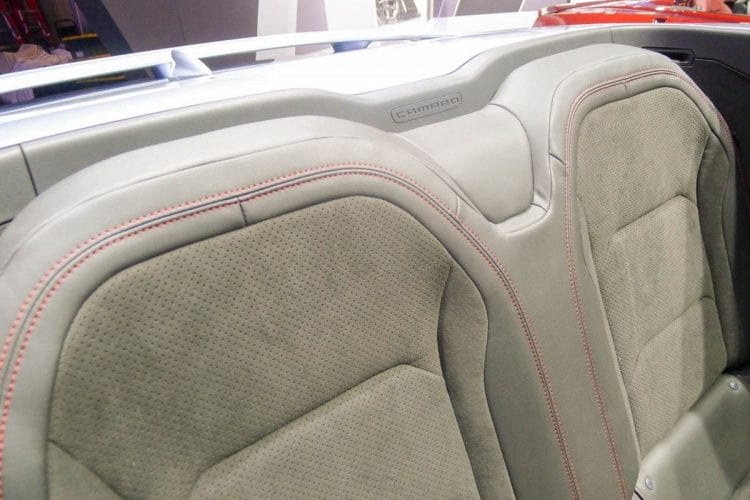 The engine bay is home to the same 6.2-liter V8 as found in the coupe. Don’t for a moment mistake this 6.2 with the LSA-based engine in the old one. That was in turn based on the older Corvette ZR1 whereas this new one is actually based on the LT4 found on the C7 Corvette Z06. It develops an astonishing 640 hp and 640 lb-ft of torque. It’s ten hp and torques down on the Z06, but that’s mostly due to the different intake and exhaust. It’s quite tunable, and we’re sure it’s only a matter of time before someone figures out a way of extracting, even more, power from it making it even bigger beast than it currently is.

The six-speed manual is a carryover from the previous generation, but the slow and old automatic has been replaced by a brand-new 10-speed unit. We’ll have to wait and see how it drives, but honestly, if you’re an enthusiast, you might as well go for the manual. Performance figures aren’t completely out in the open, but it should achieve 60 mph in 3.5 seconds and go on to over 185 mph. 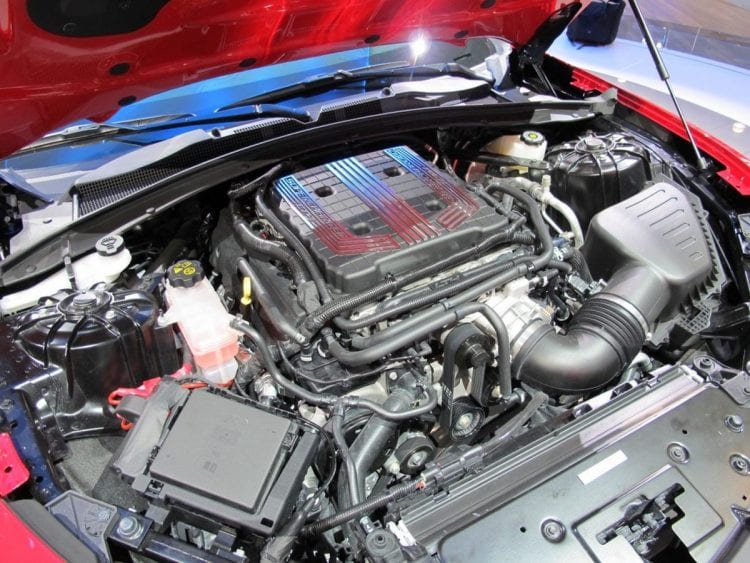 The ZL1 Coupe was one of the best handling muscle cars ever built, competing and beating the performance oriented vehicles from BMW and Lexus. This new one shouldn’t be different at all because it’s a coupe minus the roof. Prices should start at $60,000, but we’ll wait for official confirmation. If this happens, then it would mean that we need to pay about $5,000 extra over standard coupe version.