One of the latest models from Cadillac, XT5, surprised the audience by showing how the brand intends to revamp its lineup to stay ahead of the competition. It certainly got one thing going on: the segment of luxury SUVs is flooded with excellent vehicles from Lexus, BMW, and Audi, which have everything a customer could ask for: comfort, performance, technology, and luxury. However, the Cadillac may actually differ from these competitors in a big-time way, which could benefit the company in terms of getting new loyal customers and revenues. Specifically, if the models from BMW and Audi can be considered more like sports cars in the turns and on track, the competitors from Lexus and Mercedes-Benz seem to appreciate softer driving with the emphasis on comfort. Where would the new XT5 fit in this segment? Very simple: the Cadillac makes the most focus on the handling performance and produces a design that would be appealing to the younger buyers. Good move. Let’s see how XT5 is equipped to do that.

First and foremost, the title of the model should be explained. As it was briefly mentioned above, the company needed to revamp its lineup to be competitive, and 2017 Cadillac XT5 name is one of the ‘revamped’ elements. The new lineup of Cadillac will include two types of vehicles: CT sedans (stands for Cadillac Touring) and XT crossovers (stands for Crossover Touring). The number of the model relates to its place in the lineup’s hierarchy: the higher the number, the more premium the model is. 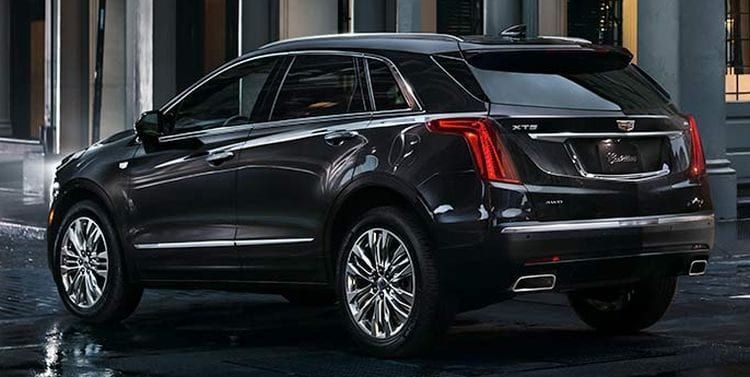 The XT5 is provided with a profoundly important place in this lineup. Specifically, it is supposed to replace the SRX model, which was the company’s best-selling vehicle for many years. Of course, it will include some design elements of the predecessor (well, if they were loved by customers) and many new and innovative ones. Therefore, 2017 Cadillac XT5 can be considered as an update of the SRX with the changes that were required to place it in the new, redesigned lineup.

Cadillac XT5 engine – what it has to offer

The model will feature a 3.6-liter V6 engine as a base, which is actually a redesigned unit from the GM. Specifically, it will be the new DOHC 24-valve direct injection beast and produces 310 horsepower and 271 lb-ft of torque. As compared with the SRX and engine it had, the fuel efficiency and performance of this new unit is 15 percent better: it can hit 60 miles per hour in just 6.7 seconds and 100 miles per hour in 19.3 seconds which are decent results for the segment. The fuel efficiency of the new engine was estimated at 18-19/26-27 mpg city/highway. It is coupled with an 8-speed automatic transmission with manual shifting mode, which is standardly equipped on all models (FWD and AWD) and trims.

There are six trims designed by Cadillac for XT5: Base, Luxury, Luxury AWD, Premium Luxury, Premium Luxury AWD and Platinum AWD. According to the official company’s website, the starting prices for these trim levels are $38,995, $44,895, $47,390, $51,895, $54,390 and $62,500, respectively. Although the prices are similar to the competitors in the segment, the variety of trims should be considered as a good thing because the customers will have the opportunity for more customization, thus higher satisfaction that allows them to suit their needs better.

The base XT5 trim comes with a decent load of functions and features: a rearview camera, LED daytime running lights, rear parking assistant, 18-inch wheels, keyless ignition, power seats, leather upholstery, and automatic headlights. Among these features, one should be discussed more thoroughly, the Rear Camera Mirror System. It is a particularly innovative function that utilizes a video display in place of a rearview mirror, which is much more useful than a real mirror because the image is wider and crisper showing you what is behind the vehicle. The list of technology features is continued with the voice commands, 8-inch touch screen display and compatibility with iOS and Android smartphones. Moreover, the XT5 will keep its passenger occupied thanks to a Wi-Fi hotspot function which provides 4G LTE connection to the Internet, USB ports for charging the mobile devices and a premium eight-speaker sound system with the possibility to use the satellite radio. The infotainment system received a more powerful processor which certainly increases the speed of work and satisfaction of the driver and passengers.

The comfort of the XT5’s cabin is boosted by the high-quality leather upholstery and some customization opportunities for seats. Specifically, the front ones are heated (along with the steering wheel) and equipped with the function of memory. One of the biggest surprises brought by this model was an extremely versatile back seat: it can split into 40/20/40 sections and significantly increase the cargo space capabilities (by the way, the total cargo space of 2017 Cadillac XT5 is 30 cubic foot).

A decent amount of cargo space can also be attributed to the increased size of the vehicle as compared to the predecessor (length: 189.5 inches, and width 75.0 inches), which means that XT5 became 2 inches longer. As the result, the rear-seat legroom was also enhanced by 3.2 inches. The last thing that needs to be emphasized is that the designers used high-quality materials in the interior, and the surfaces that look like leather and wood are, in fact, made from those materials.

A lot of safety features are available for customers of XT5, including traction and stability control, curtain and front airbags, antilock disc brakes, crash notification, remote door unlocking, and OnStar support. The advanced safety features include front parking sensors, blind-spot monitoring, rear cross-traffic alert, forward collision alert, automatic braking, pedestrian detection, lane departure warning, and an alarm that senses the vehicle movement outside and in. The Premium trims of the model usually include the Driver Awareness Package that features most of these functions and even more. Therefore, 2017 Cadillac XT5 will be as safe as it gets, with all the latest options added; this is essentially needed for the luxury segment in order to stay competitive.

Cadillac XT is a decent competitor in the luxury SUV segment, even though it is flooded with reputable manufacturers like Lexus and Mercedes-Benz. It certainly has everything for it: powerful and efficient engine, comfortable and spacious cabin and a lot of tech and safety features. The revamp of the lineup for Cadillac so far looks very promising.