The average age of Cadillac buyer in America was 59, and there is something wrong with that. Cadillac was well aware of this fact, and they are putting a decent effort in turning the tide. From the start of the new millennium, it introduced sharp but also unimaginative styling, which evolved during the years and while sharpness is still present it is far more complex and appealing that are requirements these days.

One more thing besides exciting looks that could draw younger crowds was the introduction of tarmac ripping versions of its sedans. Pioneer was the first generation of CTS model offered in V version, and it was later followed through next generations, while recently ATS also got its own hot form. Meanest CTS model just received a successor, so we are about to review the 2017 Cadillac CTS-V.

Latest CTS was still sharp but enriched with a new dose of elegance compared to the older one. V model additionally adds evil, wicked smile to the mix. It instantly shows its sporty credential, and it couldn’t be mistaken for a regular model. Front bumper is simply put more aggressive, the meshed grille is highly menacing, and the hood is decorated with large black vent. The side will remind you about its V flavor with big side air extractors and huge wheels, while the rear is a little bit on a tame side.

Back end on the regular model is far less exciting and more conservative than front fascia and V division tried to avoid that by adding black diffuser with quad exhausts, which was a nice move. The problem might cause huge deck lid spoiler painted in black looking like bad aftermarket tuning attempt, and it comes with Carbon Fiber Package. It definitely looks tacky on this type of luxury limousine so avoid that package and go with regular one, small but elegant. 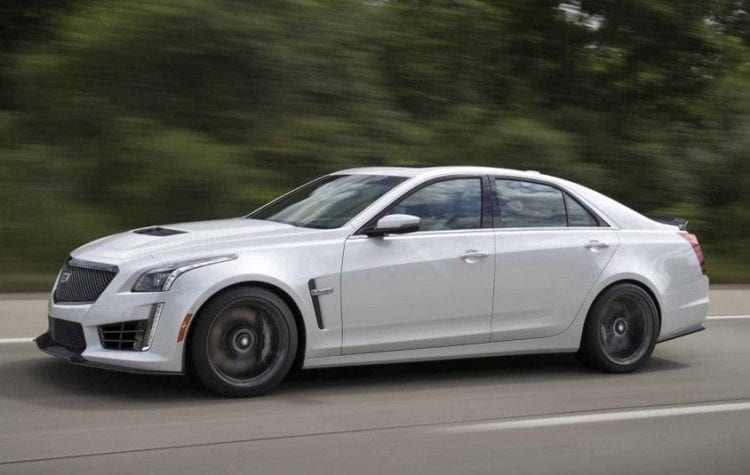 The previous generation brought breakup with a dull and simple design of the dash and current generation just stick to the new trend. V model’s cabin carries same luxury and modern look from the regular version but with added sporty bits, and while there are not many of easy to spot novelties you will certainly notice highly bolstered seats. Maybe that is enough, and maybe more racing traits in big, luxury limousine could cause the same effect as mentioned optional rear spoiler.

Yes, and it is under the hood. A place that is enriched with Corvette Z06 heart, which translates to 6.2-liter supercharged V-8 engine rated at stunning 640 horsepower and 630 pound-feet of torque. Enough to propel large sedan in 3.7 seconds to 60 mph and it could go as far as 200 mph. It is sufficient to rip apart M5 in the straight line which is 0.7 seconds behind when it comes to acceleration. Still, it is old M5, and since Merc’s E63 S AMG is 0.3 seconds faster than Caddy, new Bimmer is surely going to stick to Merc’s numbers.

The mentioned unit is paired with 8-speed automatic gearbox, which offers sublimely quick changes, and it’s also borrowed from the same source as the engine. If someone has a better source for the loan in his mind, feel free to tell us. Fuel efficiency is at, considering the situation, still acceptable 17 mpg combined.

V must signify much more than just engine and some styling bits, so this guy is 20 percent stiffer than the regular model. That with special Michelin Pilot Super Sport tires permit CTS-V to rush into corners at 1g of lateral force which is praiseworthy. Despite mentioned, it can suppress its wild nature, and due to the Magnetic Ride Control dampers that are capable of adjusting the stiffness settings 1,000 times per second, it can become luxury barge with all imaginable comfort in no time.

2017 Cadillac CTS-V is the clear testament of American luxury brand’s effort to produce something exciting and thrilling. And it is definitely good attempt. It retains all good qualities of the luxury sedan but mixed with Corvette bits. How amazing is that? It packs more horsepower on paper than Merc or Bimmer. Yes, it is slower on the tarmac (strictly speaking not yet than M5, but it will be soon) but it is also less expensive, and by huge margin indeed, so there you have it.