Buick Envision is mid-size crossover SUV introduced to the Chinese market in 2014. We all know that Buick is a big thing in China and they got to see it first. Two years were needed for GM to bring it to the US and it was welcomed in a patriotic manner. 2017 Buick Envision is the first Chinese-built GM car to be sold in America and already high tensions about job outsourcing got old emotions flared up.

Anyway, GM is still sticking up to the Chinese workforce in this case, and we are about to see whether 2017 Buick Envision has enough coolness to extinguish emotional flames surrounding it.

We have definitely seen more radical styling from Buick. Envision is visually highly restrained with not even one spot making it cross the boundaries of highly polite. Or wait, there is. If you happen to notice, hood carries same portholes as the previous generation of LaCrosse, and while some found them interesting on mentioned sedan, here they are totally out of the line with rest of the conservative design and in order to avoid the inclination to the appearance of cheapest tuning attempts they should be removed. Envision is in its size between small Encore and pretty big Enclave, and for Buick design cues nicely fit proportions of this one.

Design wise, cabin is a different story. It looks incredibly stylish, elegant and modern, all in one. The role of the portholes inside the cabin took the analog clock, with an interesting position on the dash supplemented by the view of it as a questionable part of overall appearance. It appears lavish in luxury, but build quality better matches one of Acura’s RDX or Infiniti’s QX50 than of German premium. The cabin is also fairly spacious as you can seat five in comfort and in higher trims nobody would mind riding in the back as they have their own climate controls, USB ports, and 120v outlet.

One thing brings Envision interior to the spotlight, and that is absolute serenity caused by lack of noise, something for many rivals to catch up. There is an even touch of ingenuity as there is no central tunnel at the rear, and the fifth passenger is definitely going to appreciate that.

There are two choices. The base engine would be a 2.5-liter that puts out 197 horsepower through a 6-speed automatic transmission to the front or, in Essence models, all four wheels. The superior choice would be new 2.0-liter 252-horsepower turbocharged 4-cylinder that debuted last year and it is available in Premium and Premium II models alongside with 6-speed automatic and AWD.

Power from turbo engine is more than adequate, and turbo lag is hard to notice, all while the top kick is admirably positioned low on torque scale. The new unit offers 26 mpg combined, while older naturally aspired offers 29 mpg, which could be an attractive point for some, alongside cheaper price tag with the base engine. 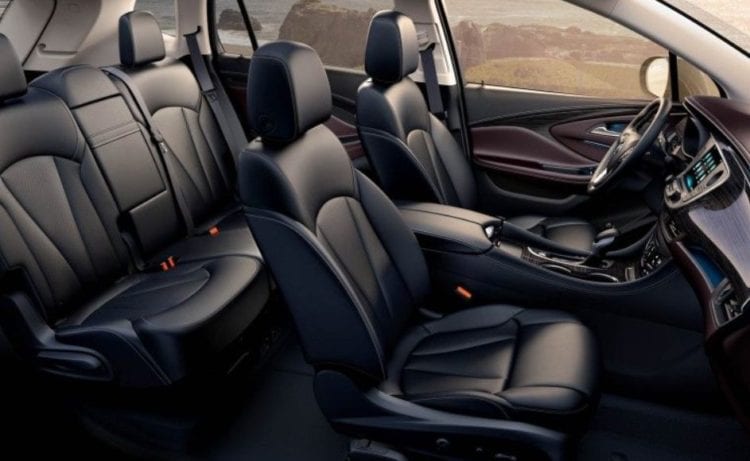 There is base trim and Preferred after it, followed by Essence and finally Premium I and II models. Standard equipment is not abundant, but it is still decent as you get dual-zone climate control, a power liftgate, tilt-and-telescope steering, Apple CarPlay and AndroidAuto, 8-way-power front seats with power lumbar and heaters.

Furthermore, we have infotainment system that includes an 8-inch color touchscreen and 6-speaker audio system, rearview camera and backup sensors, plus ten airbags and six months of complimentary OnStar service.

The price tag for base version is around $35,000 and going all the way to $46,000, which actually sits it in a bunch of domestic and Japanese premium SUVs while keeping 2017 Buick Envision well below German counterparts. It has inconspicuous and conservative looks, hard to find these days, and some are maybe searching just for that.

On the plus side, it comes with lavishly luxurious and serene interior which would probably seal the deal for many and cause forgiveness for letting Chinese hands meddle with it.