In July of 2016, BMW ended the production of its Z4 roadster which was concluded with 2016 MY. At the time we all thought that the break will be a short one and that we will be hearing news about 2017 BMW Z4 all the time. The absence of any news about this vehicle lasted for some time, but BMW didn’t stand still. The German automaker took its time and together with its partner, Toyota, have been working on their new sports car. For the Japanese automaker, this new model will be a resurrection of famous Supra name. For the Munich-based company it is a step up in Z4 evolution, and with 2018 BMW Z5 we will have a new Z car. The name is new, let’s see what else is?

Same as Z3 model which exited factory almost ten years ago new Z5 will also have soft-top as standard. For hard-top you will have to wait some more time because the production of hard-top models will start on a later date. Regarding the size of the new 2018 BMW Z5, we expect for it to be bigger than Z4 ever was. Also up front, the grille will be larger but also wider. These changes will make the car take a lower stance which will also aid in its handling and performance. Despite being spied and filmed on many occasions, there is nothing much to say about overall design because of heavy camouflage. What is clear is that the Z5 will share many things with 2018 Toyota Supra. The interior of the both Z5 and Supra hasn’t been developed fully yet, so we can’t predict just how will it look, but considering resources available to both companies we definitely won’t be disappointed when news comes our way. 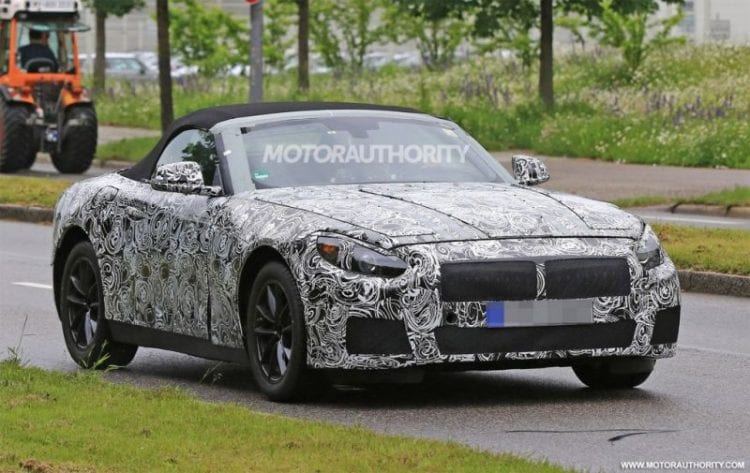 Despite 2018 BMW Z5 being in late stages of testing we still don’t have any concrete information about powertrain options. But, knowing Germans and their way of dealing with things for a base installment of new BMW Z5 we can expect turbocharged four-cylinder unit. The same mill with better output numbers will probably be available on middle trims while upper ones will use a different engine and that would be a 3.0-liter inline six. There is talk about another option for M version, and BMW-Toyota hybrid for the future but these are still speculations.

As far as release date goes, you can expect new Z5 model available on the market by the end of this year or at the beginning of 2018. Late 2017 stays in the cards because a Z4 successor has been frequently tested in recent weeks signaling completion of development.

If the new Z car from BMW comes in the shape of 2017 BMW Z4 as we all expected the price would stay the same. The last Z4 was available at the base price of $50,000. Considering that 2018 Z5 is being developed in cooperation between Toyota and BMW some of the cost will be lowered but you shouldn’t expect that it will cost less than Z4. The increase of a couple of thousands of dollars is a real possibility.