What if you are a car enthusiast, but you chose a different profession. What if you always dreamed of becoming a racer and instead you became a lawyer, doctor, CEO… Well, there is a cure for broken dreams, and one of the many would be GT4 European Series. Besides the fact that you skipped carting, thousands of theoretical lessons and thousands of laps, you can just sit in your own race car and surrounded by others with the similar story, you are free to rip apart pavement on real racing tracks with the trophy in your eyes. All you need is a ticket to enter, and one of those tickets is 2017 BMW M4 GT4.

It comes as a replacement for M3 GT4, it is a hardcore version of road legal M4 GTS, and it will borrow many things from M6 GT3. There are no clear photos of its official look for now but expect many carbon fiber parts like doors, front splitter, rear wings, and carbon hood from GTS version. It will definitely look even more aggressive than already mean GTS. In August this year prototype of GT4 was caught testing, but sadly it was a regular M4 version with added aero bits, and at this time BMW released only one official photo of it, but, just as usual, it was camouflaged, so we can let out imagination roam wild.

We don’t know much at this moment beside BMW statement that seats are going to be the same as one in M6 GT3 Series. The car will probably retain dashboard from regular model, while everything else would be adjusted to racing, so expect roll cage, lightweight door panels, fire extinguisher and similar race stuff.

Again, nothing is official at this moment. The thing that we know is that GT4 is not going to get its special engine, instead, it will use one from M4, as it was usual in this case. Since M4 made the transition from naturally aspired V8 to turbo powered 3.0-liter inline-six engine, the same thing will happen under the hood here.

Mentioned I6 produce 431 hp in M4, 500 hp in GTS, while what power should GT4 get, is unknown yet. Don’t expect it to be as much as it is possible since it will depend on car’s curb weight according to FIA regulations. BMW spiced things up with the announcement that exhaust system, brakes, and pedal box are definitely coming from $400k monster M6 GT3. 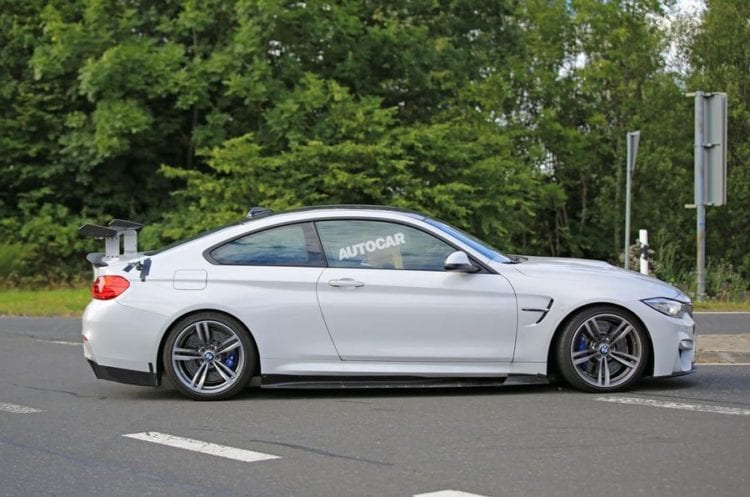 Is unknown at this moment, same as most of the things. If we look at other GT4 cars, it will probably cost around $140,000, which is actually enough money to buy two M4, but it is undoubtedly bargain compared to the mentioned price tag of M6 GT3.

If you read our story about Ferrari 488 Challenge, it is pretty much the same recipe, although with significantly fewer funds required and with much more options, as with M4 GT4 you can race in many different events. If you dreamed about racing and taking a couple of laps during free time on the weekend doesn’t do the job, be free to examine upcoming 2017 BMW M4 GT4 as it is quite decent offering.