BMW has shocked us all with the Bangle era. Many fans were vocal and harsh with their critics of new radicalized design and disruption of tradition. Top of the line 7 Series even featured boost in sales year before the introduction of new Bangle one in 2001, as the buyers rushed to buy last “proper” 7 Series before things got spoiled. After that new version became the best-selling one in BMW’s history? So, two things are certain, people don’t know what they want, and you just cannot please them all.

Despite obvious, BMW hasn’t stopped trying and after people’s mourning about Bangle era in recent time and criticism about the lack of styling thrills, Munich shocked us ones again with i-series. BMW i8 concept was revealed in 2011, and it just strolled down to the public roads three years later almost not changing any of its highly futuristic concept’s lines. It has been two years after introduction and let’s see what 2017 BMW i8 has to tell about itself. 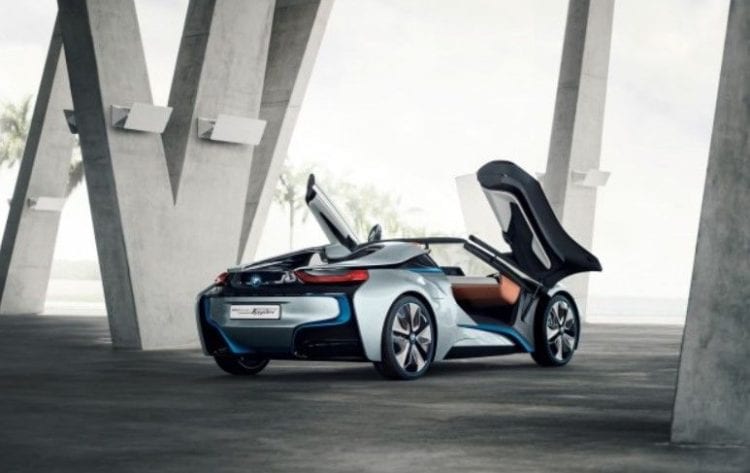 The car is ultimately futuristic. We see that all time in the automotive world but only on concept stages but this one we can see on the streets. When you see it, you see the future, and future looks bright according to it. The rear end is much more controversial with C pillars merging with the lights and acting as separate metal sheet glued to the body. Scissor doors just complement the whole story.

It shares same dimensions with Audi R8, with even being longer, so be sure that it leaves interesting statement when seen in person. If you ever yearned about automotive world concept cars and you claimed that production versions were just acting as a spoiler of perfection, here you have true blooded, uncorrupted, vision of future.

On our delight cabin continues the story of the exterior. All BMW traits are there, it has just skipped one generation and went directly to future. Ok, the buttons and knobs are still in the present days, but the flow of lines isn’t. Fluidity is one word that comes to our minds when confronted with it and it certainly breeds serenity for your mental status once inside. It also tries to stay in the future with green thinking, so many materials came from recycled processing and leather was treated with natural processes.

POWER FOR THE WHEELS

This is the interesting part. Its looks suggest that no ordinary things are happening under the skin and it proves that right. Turbocharged 1.5-liter three cylinder engine with 231 hp, appears as an insult to this type of car, so it doesn’t stand alone. It takes place at the back, while on front axle we have an electric motor with 131 hp. The traditional unit uses 6-speed automatic while the electric comes attached with 2-speed one. Each of the parts of this drivetrain power the wheels that are closer to it. Combined power is 362 hp and 420 lb-ft, enough for 4.4 seconds to 60 mph and up to 155 mph.

The best thing is, hard to believe, 94 mpg combined fuel efficiency. You can have “unlimited” mpg but only for 22 miles, as that is how much it can go solely on electric power and with an addition that you never cross 75 mph mark. One more thing participated in all these figures, and that is LifeDrive architecture keeping weight at 3,285 pounds and allowing perfect 50/50 distribution of it.

2017 BMW i8 is the thing for you if you’re always for latest gizmos and style. If you are a slave to trends, it will allow you to stay ahead of the time. Competition is very slim as Porsche stopped hybrid 911 development, for now, new generation GT-R is not in near sight, and R8 e-tron is dead, and it cost as ten i8s. Only similar thinker in today’s market is Honda NSX, which is twice as faster, but also twice as more conventional looking. If the form is above capability in your world, this would be your first choice.