We wrote recently about 7 Series, but we focused on the 740e hybrid model. The sixth generation of 7 Series was revealed in 2015, and it met incredibly sales successful sixth generation of S-Class, which actually still sells better than Beemer despite being on the market for two years longer. New Lexus LS just debuted better than ever, we also have new Porsche Panamera, while new Audi A8 is on the way, so let’s see what 2017 BMW 7 Series has to offer on the whole.

This generation is the sleekest Beemer in years. You can forget bulky 7 Series from Bangle area and plainly designed previous generation, this one is handsome to the bone. It appears athletic and vigorous, it looks that it could be driven in a joyous manner, although it really can’t as it still over 200 inches long. This is the full-size luxury sedan, not a sports one, don’t get confused about that.

Cabin lacks the “wow” effect from Mercedes or new Lexus, but it grows on you with time. As time passes, you will start to appreciate its nonintrusive elegance with incredible refinement and attention to details.

The main thing that is new for 2017 is a disappearance of regular wheelbase version. Stretched wheelbase becomes standard on all models, now betting S-Class by two inches in size. That shouldn’t worry anybody in the aesthetic sense, as the nicely sculptured body absorbs extra inches with no problem. One more novelty is optional AWD with base 740i version, which was not the case before.

There is an abundance of standard equipment, just to name the few- 18-inch wheels with run-flat tires, adaptive LED headlights, panoramic sunroof, adaptive air suspension, four-zone climate control, leather upholstery, keyless entry and ignition. Furthermore, we have digital instrument cluster, iDrive infotainment system with 10.2-inch screen, onboard Internet with Wi-Fi hotspot, 16-speaker Harman Kardon audio system and so on. The main gizmo is, of course, Gesture Control, that debuted with 7 Series, allowing you to control the stuff by swinging your hands through the air.

This is not the end, as we have remarkable M760i with huge and turbocharged 6.6-liter V12 boosting 601 hp and 590 lb-ft. Don’t confuse this one with proper M model, but it does reach 60 mph in 3.7 seconds, which is better than Mercedes S65 AMG and Audi S8 Plus, while very close to Panamera Turbo.

On the reasonable side you have 740e hybrid model mixing turbocharged I4 petrol engine with an electric motor giving the total power of 325 hp, and in Europe, you have three different diesel models. No matter which engine you choose, they are all mated to an 8-speed automatic, which is good since it is one of the industry’s best. 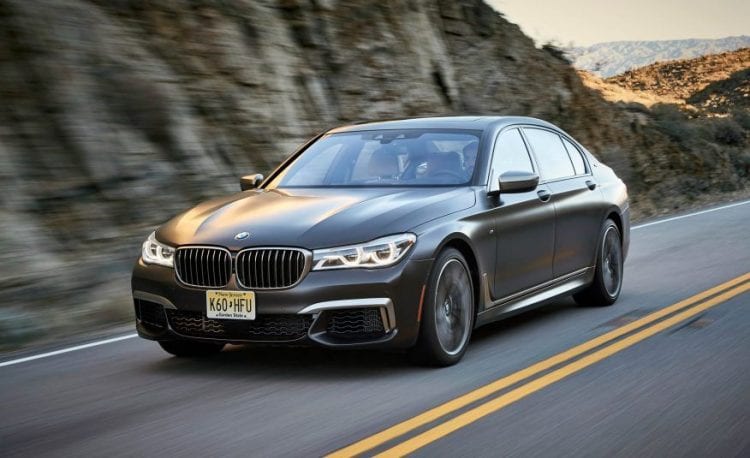 2017 BMW 7 Series somehow positioned itself in the middle. It is better handling than Merc but not good as Porsche, it is not as lavishly luxurious as S-Class inside, but it is richer than Panamera. It is sleeker than Porsche or Audi but not gracious as Mercedes. You hardly find any area where it is absolutely dominant over the rivals, it steals a little bit of everything.

You want an aristocracy, you’ll go for the S-Class, you want adrenaline rush in the corners, you end up with Panamera, you want restrained elegance you’ll opt for Audi, you desire a slice of everything, you’ll choose Beemer. The problem might be the Lexus, as it also has plenty, but in higher dosage.