Bentley is no stranger to fast, luxurious vehicles. For as long as they’ve been in existence, they have been producing some of the best fast cruisers around. Think of them as a mix of Rolls-Royce and Aston Martin. Not just a luxury car, but neither a full-blown sports car. Rather, a combination of both, combining the best of both worlds. Well, Bentley has taken a leaf out of Porsche’s book and decided to fill in their model range with a brand new one slotting in the middle.

The Geneva Motor Show is long over, so you might have already seen the new Flying Spur V8 S. It’s meant to slot between the standard V8 and the large Flying Spur W12 powered version. As far as differences go, there aren’t many between it and the standard V8 Flying Spur, but it does have a few crucial areas where it’s rather unique. The standard V8 is already one hell of a car, but the S just takes that to a whole new level.

First of all, there’s the exterior. It’s not a large deviation from the standard car, but it is recognizable as an S by car enthusiasts. For starters, the matrix grille has been painted black, and the lower part of the fascia has been changed quite a bit. The standard car has body colored louvers which extend from the air dams. The V8 S has the same louver but with a more aggressive design which better suits the car’s sportier character. One cool feature is the option of tinted headlights which makes it stand out even more.

The profile view of the car is largely unchanged, retaining the same roofline and sidelines. The biggest and most noticeable difference here is the 20-inch wheels which feature an open-spoke design and are painted in a different color. If that’s not enough for you, you can opt for Mulliner Spec 21-inch wheels which are machined to perfection. They have a six-spoke design ad are even classier looking. Something else which isn’t all that noticeable is the option to paint the mirror covers in a gloss black finish.

The back is the same story, but it’s closer to the front than the sides. What we mean by that is that you can notice more differences from the standard car. For instance, the rear diffuser is finished in Beluga gloss, giving the rear end a mysterious and meaner appearance. Again, you can have the rear taillights tinted for that extra special and more unique look, or leave them as they are. 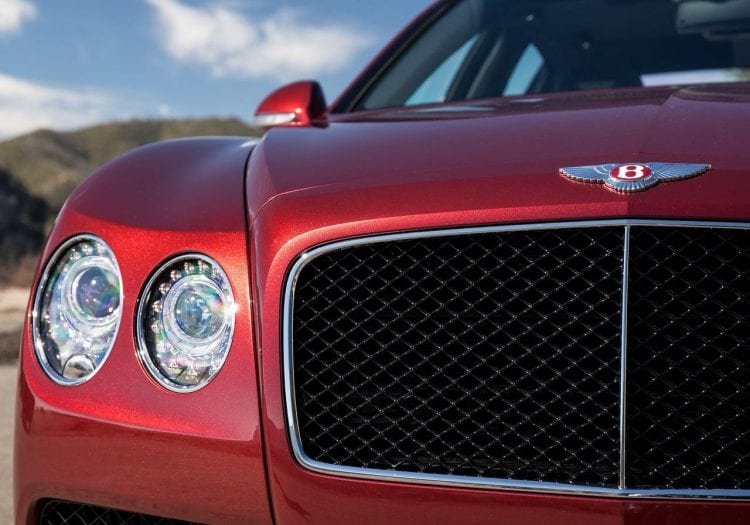 Overall, it’s a well designed and executed vehicle, something that we are used to getting from Bentley. It always has been, but the few improvements bring it even closer to its targeted audience. It’s not a car everyone will love as it still is large and massive looking, but if you don’t mind that and like a car that’s able to intimidate anyone while looking as classy and elegant as ever, the Flying Spur is the car for you.

The interior is, as expected, incredible. From the moment you open the door, you can tell just how high-quality everything is. The noise the door makes when opening and closing alone is a pretty strong indicator of the build quality of this Bentley. Once inside, you’re greeted by a three-spoke steering wheel with Piano-black veneers. The design of the dashboard is largely the same, but all that extra wood details makes it even more luxurious. 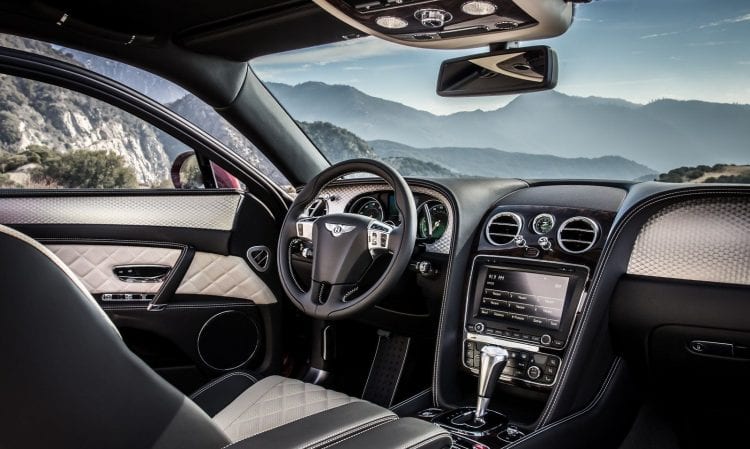 To improve the feel of the cabin (as if that’s possible), there’s a knurled gear shifter with matching shift paddles. Differentiating the S model further are two-tone seats which are contrasted by the center bow on the roof. The mandatory “V8 S” letters are stitched into the headrests of the seats, making sure you’re always aware that it isn’t just a standard Flying Spur.

A really cool addition to the V8 is the Mulliner Driving Specification package. It adds a small diamond quilting pattern throughout the cabin: the dashboard, door trims and even the seat inserts. As if the already luxurious and expensive wasn’t enough, you get the option to have diamonds in the cabin. Talk about spoiled. This is one of the features that give you that insane prestige feel. 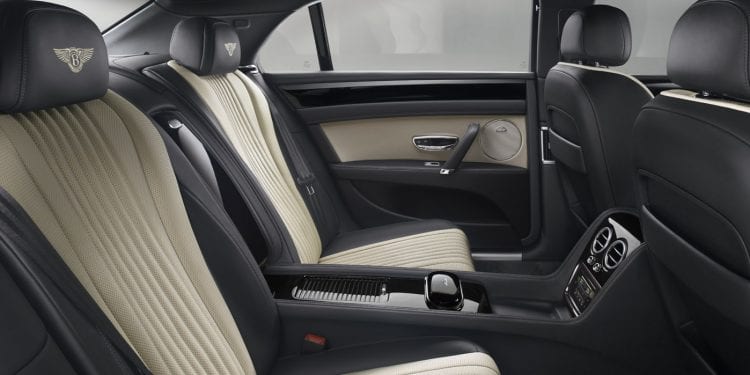 Headroom and legroom are generous in all rows just like you might have expected. The combined cabin quality along with the comfort that the seats offer makes it probably the best vehicle for long journeys. You can enjoy it from the back seats too, but if you want to experience what the Flying Spur V8 S is about, you’ll have to get behind the wheel and try it for yourself. We know that we rather spend time behind the wheel than just to be driven on the back seat of this beauty.

And what a driving experience it is. The engine is the same 4.0 liter V8 with twin turbochargers, but it has been modified to produce and handle the extra horsepower. It’s got variable displacement, thermal management, low-friction bearings and energy recuperation system. The entire drivetrain (engine, transmission, and auxiliaries) have been modified to handle the extra power.

Speaking of power, the V8 now outputs 512 hp and 02 lb-ft of torque. That’s an increase of 21 hp and 14 lb-ft of torque when compared to the standard car. Performance figures are ridiculous for such a large vehicle. Namely, it can hit 60 miles per hour in just 4.6 seconds, and it will go on to a top speed of 190 mph. The transmission is the already familiar 8-speed unit sending power to all four wheels. The system is naturally rear-wheel biased, sending 60 percent of the power to the rear and 40 to the front. This improves comfort plus can easily get you out of any tricky situation. 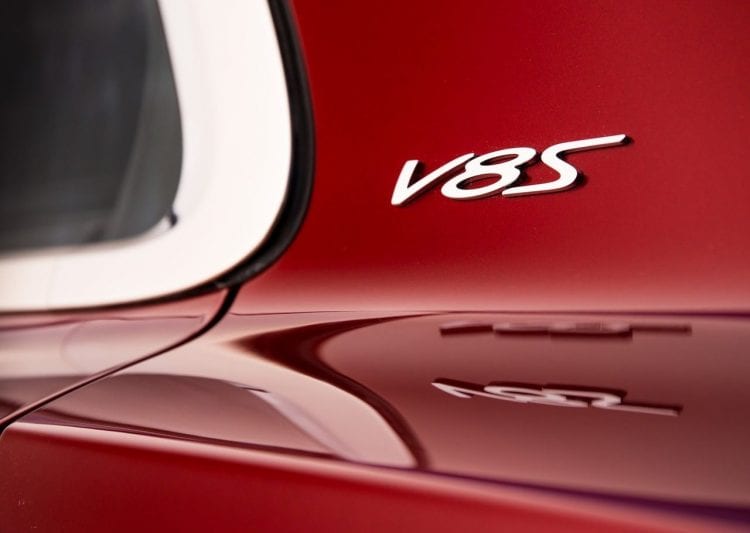 The calibrations have been done to the ESC and damping systems too. It’s now a much stiffer and more aggressive vehicle when in “S” mode. It’s still not an agile sports car, but it’s a lot better than the standard car. The company is pretty much delivered best setup that can be offered for a vehicle which the main goal is to bring luxury and comfort but with the accent to the performances. Weirdly, the added body control and stiffness do not affect the ride comfort at all. But hey it’s Bentley, they sure know how to make a nice riding vehicle.

Should you want one, you’ll have to shell out a lot of money. Sadly, we can’t say how much just yet because no prices have been announced. Expect it to be stratospherically high. With the base version priced at more than $200,000, we expect the 2017 Bentley Flying Spur V8 S to be offered for $220,000 or in a similar range.