Audi entered SUV market with its remarkable fortress Q7 in 2005. It was never offered in hotter S version, although nobody could argue tremendous power figure of V12 TDI engine, which is still unmatched even in the current model. The first title of beefed up crossover took Q5 model which was introduced in 2008 while S version saw the light of day in 2013 and was closely followed by RSQ3 later that year. Top version SQ7 was finally unveiled in 2016, but we are going to focus on the smaller sibling in order to see whether 2017 Audi SQ5 can still manage to cope with rising competition.

POSITION ON THE MARKET

When SQ5 was introduced in 2013 it didn’t have any real competition in its class, neither Mercedes or BMW was offering their version of sports crossover. Rival’s top models were lagging behind in power figures, and none of them was tuned for more energetic driving.

But times is relentless, and it brought new players in the same field as Merc is offering AMG GLC 43 now, Jag’s F-Pace comes with 380 hp as a current top choice, let alone Porsche Macan Turbo with 400 hp. A new generation of SQ5 has just been revealed, but we will have to wait a bit until it actually hits dealer’s lots, which leaves us with current model which has to endure all those newly found adversaries.

SQ5 stills pack quite a punch under the hood. There are two versions, diesel one, 3.0-liter twin-turbo V6 engine delivering 313 PS and astonishing 479 lb-ft of torque, and there is a petrol option, 3.0-liter V6 unit rated at 354 horsepower and 346 lb-ft. All-wheel drive and an eight-speed automatic are featured in both vehicles. These two take respectable 5.1 seconds to 60 mph, while, despite huge maximum torque power with diesel, petrol is just more suitable for the vehicle of this type. Mentioned acceleration beats Jaguar’s 5.5 seconds, although SVR version is inevitably approaching, while it can’t keep up with Macan’s or GLC’s offer of 4.8 seconds.

Fuel consumption for TFSI version is 19 mpg combined, while for TDI is colossal 35 mpg. As for driving pleasures SQ5 will return plenty, with remarkable grip and minimal body roll, but also with fake feel provided by an uncommunicative steering wheel and maybe a little bit too more harshness than necessary. Both Macan and F-Pace were created with driving enjoyment in mind, and both are unmatched so far, at least until BMW finally brings M-powered X3.

SQ5 offers stunning build quality in the cabin, as we are used with Audi, although the design is showing its age openly. There are two trim levels, Premium Plus and Prestige. Since we are talking about Q5’s top version even standard equipment includes suede leather, 20-inch wheels, adjustable drive settings, performance brakes, sport-tuned suspension, and similar. Age is also visible in tech department as there are no USB ports and we are talking here about an outdated version of Audi’s MMI system. 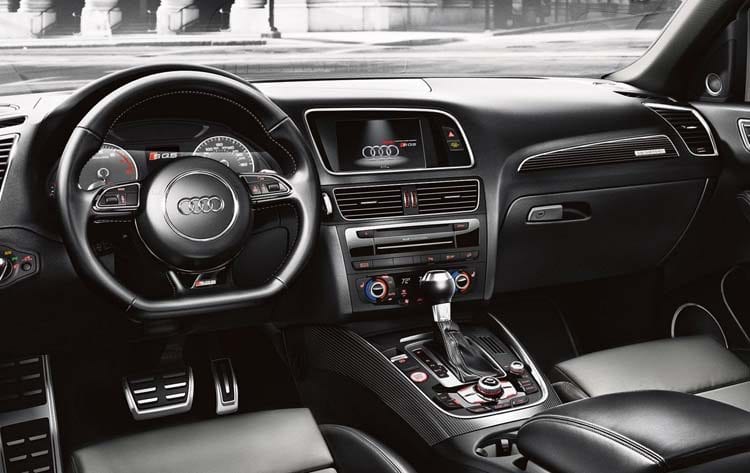 In terms of appearance S version introduces some visual racy delights, but definitely not many, as with Audi less is more, and everything is coated in restrained elegance, which means that it isn’t guaranteed that everybody on the street will notice what is happening under the hood. The car offers plenty of safety stuff, but due to the years on the market, it relies on passive, rather than active systems, so nothing autonomous is present here.

2017 Audi SQ5 was astounding offer when it was introduced in 2013, and the fact is that this vehicle was based on a model from 2008. Times always moves forward, and competition is not sleeping, so things on the market have changed. It still has respectable figures, and it can corner properly, but it is inevitably outdated. Unless you are incredibly devoted to this particular model, we would advise you to wait just a little bit as new SQ5 is about to hit the streets, with the same power, but less weight and better torque figures.