In the last decade, Audi has been extensively involved in redesigning the existing line-up that mostly consisted of models with the pretty conventional design. We have been a little bit surprised that an upgraded S4 has taken so much time to update, but it is official now: it joins the Q7, A4, and R8 in the latest line-up refreshment. Before the new S4 was unveiled at the last year’s Frankfurt Motor Show, its coming was highly predictable: the Germans had just released the upgraded A4, which is placed under the S line in the company’s structure. Moreover, S4 will most likely come to fill the slot between A4 and RS4 as the compact sedan vehicle.
Although the new S4 will arrive later this year, there is a lot of information available so read below to find out all the details.

According to the German manufacturer, S4 shares its platform with A4, which is a chassis made using steel and aluminum. All the main exterior features and dimensions are also identical: this means that S4 will be slightly larger than the previous generation model. Looking at the body, it’s almost impossible to acknowledge the aggressiveness and aerodynamics of the design, so it is very likely that S4 has that impressive drag coefficient of A4, which was measured at 0.23. We are sure that few added details here will further improve it in this segment since it is clear that S version will be able to reach much higher speeds. 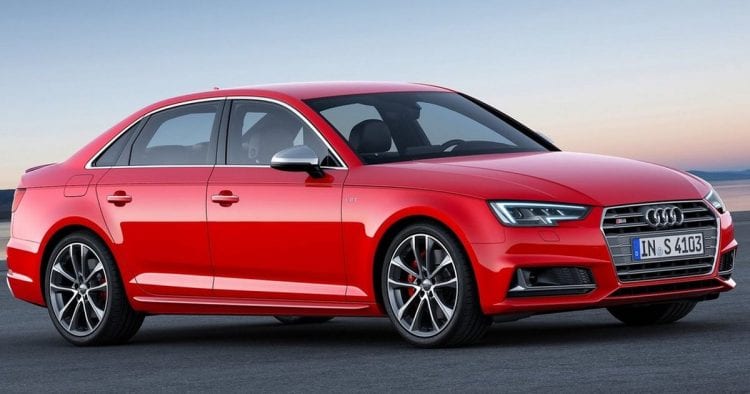 Among the new design elements that could be easily noticed are reshaped grille, revised headlamps, more LEDs, and changed hood. Although these features had been already implemented in A4, they are certainly new to S line-up and in combination with a unique bumper the front comes very impressive. A couple more words about the bumper: it now has a new lower section with changed side intakes and larger splitter, which, to be honest, does not make much of a difference. Nonetheless, we welcome any good change so let’s appreciate Audi’s effort to make S4 more distinct from A4.

When we move to the profile, there is not a lot of new stuff to talk about. The manufacturer thought it would be enough to revise the side skirts, add black window trim, and aluminum-look mirror caps. The same could be said about the rear end: S4 now has bigger trunk lid spoiler and new inserts that unite two pairs of identical exhaust pipes. As we see, the amount of changes in the exterior is small, but all of these enhance the previous design and make it looking more aggressive and sporty, which is good for many Audi fans. The 2017 Audi S4 model also comes standard with 18-inch wheels, and 19’s are offered as optional. 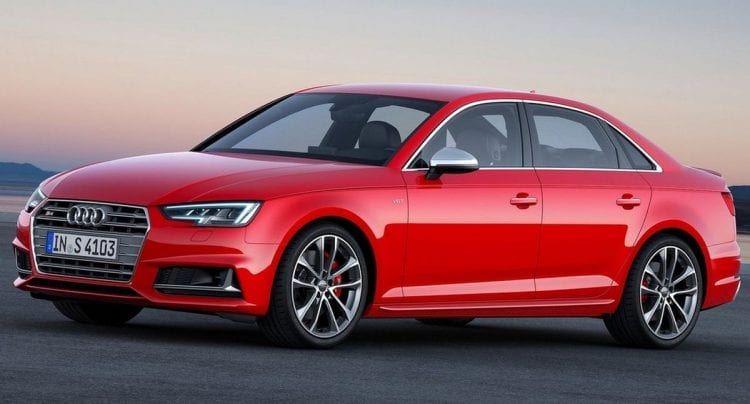 We wish we could say that the interior is radically different from what the A4 brings, but it isn’t: if you take a look at the cabin of two models you will quickly notice a lot of similarities. Do not get us wrong; it is still a great-looking and impressive design, but we always wanted more because we are true fans of innovations and new improved stuff in cars.

Besides, there are some new elements inside S4, including the dashboard, which now brings new center stack and air-vent strip and greatly enhances the feeling of interior width, and infotainment controls. Moreover, some of the elements were relocated, such as new infotainment touch screen display, which found its place on top of the dashboard. By the way, it is an 8.3-inch display with stunning graphics and sharp colors representing one real upgrade. 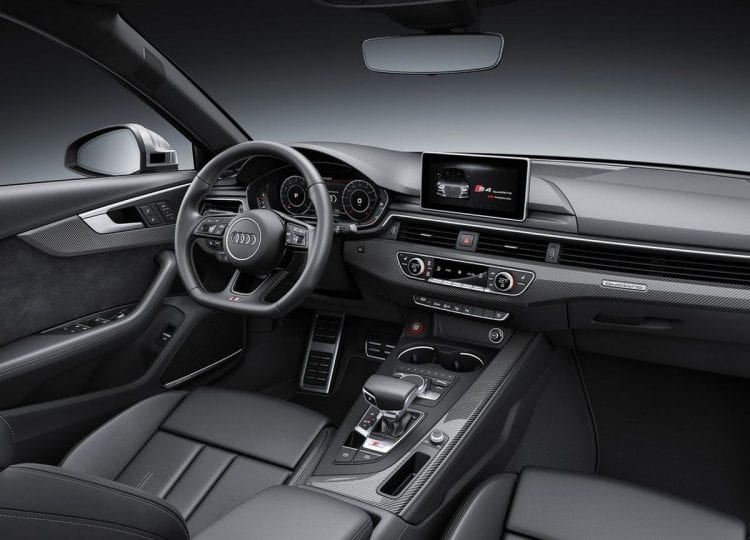 Also, let’s not forget that the cabin of S4 has more space than the previous generation model. Specifically, the gained room was spent to increase the space for the front seats and to make trips more comfortable for the driver and the passenger.

German car maker offers some premium features in S4 as well. For example, the new Bang & Olufsen sound system and Audi-branded tablet can be used for entertainment during long trips, as well as LED interior lighting for controls and doors at night.

However, these features can also be found in A4, so let’s see what unique ones were provided by the designs for S4. They include sports seats with adjustable side sections, massage function, leather, and different palate of colors.

Overall, even though the interior is mostly carried out from A4, there is still a fair amount of new stuff, and even we would love to see more upgrades it is still good. 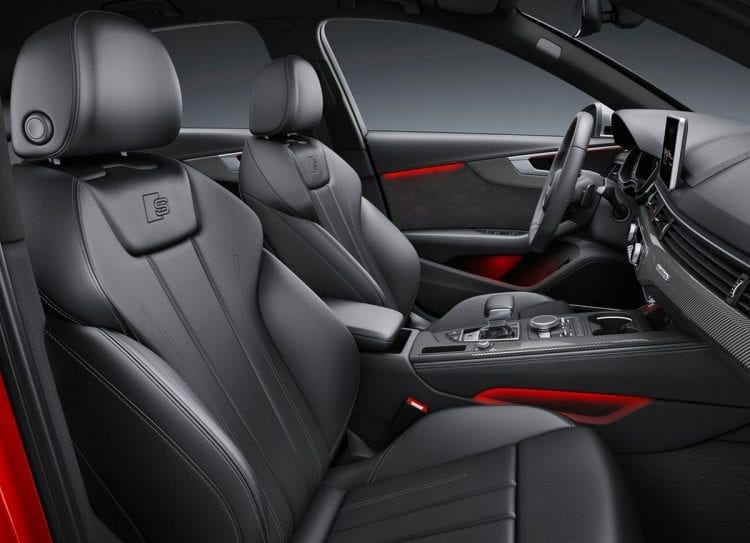 The list of new stuff continues with an engine! We are getting a new one, called 3.0TFSI that now uses turbocharger instead of the supercharger. This setup results in 354 horsepower and 369 lb-ft of torque. It is a significant improvement if compared with the previous generation model; specifically, it is measured at 21 horsepower and 44lb-ft of torque. On top of that turbocharger does not make any load on an engine like the supercharger does. This beast is capable of reaching 60 miles per hour in just 4.7 seconds, this is advertised, but we do expect this figure to be dropped for about 0.4 or 0.5 seconds, top speed is 155 miles per hour. Naturally, it can easily go faster, but the automaker has limited this capability through electronic control, something we would like to throw out.

The changes continue with the transmission: Audi has replaced the manual unit with the eight-speed automatic unit that sends the power through a permanent AWD system and allows free-wheeling to save fuel. The six-speed manual option also offered previously seems to be abandoned for automatic as well. We know that automatic transmission is more economical, and more importantly it is better in the performance segment, but still, we like the manual option. 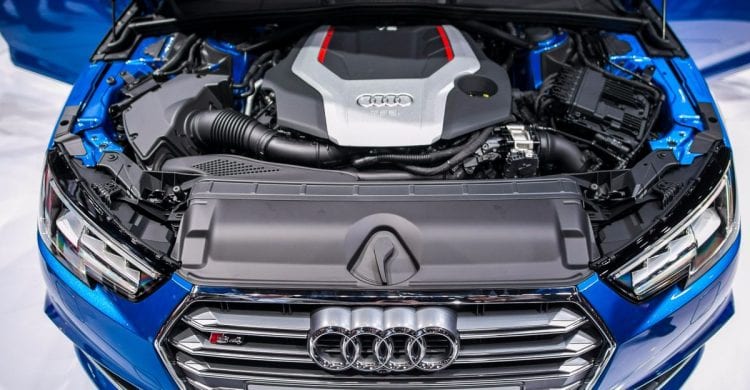 There are only two trims offered for S4, Prestige and Premium Plus. The first respective trim will start at $54,250 and offers a distinct package of functions, such as voice control and heated seats. The second trim’s, which is a base version, starts at $48,400 and offers LED daytime running lights, 10-speaker standard sound system, and others. The model will be available later this year, but it is sufficient to suggest that it will be available pretty soon, maybe in late summer or fall.