It’s not a secret that more and more manufacturers are caught cheating emission tests for diesel engines, but once you find out how strict U.S. regulations for diesel cars are, you’re not that baffled why. Over in Europe diesel engines are the norm, with the price of gasoline being so high, but with strict emission tests in the U.S. manufacturers wanted to find ways to sell their most popular cars in Europe over in the states as well. Leaving all of that behind for the moment, let’s focus on sports cars. Can a sports car ever be considered a sports car if it’s diesel? Most U.S. enthusiasts will say no, with some of the European ones stating the opposite. The diesel engine was, and still is, a slower engine than a gasoline one. It revs less; it’s more reluctant to rev, and it is best suited for cruising. The theory is that therefore, you can never drive aggressively with such a passive and slow engine. Or can you?

The brand new homogenization begs to differ. Audi’s RS5 TDI prototype proved once again that Audi isn’t afraid to challenge other manufacturers and indeed, the world. It likes showing that the impossible is possible, and they might have done it again. How do you wonder? Well for a start, let’s just give you a brief history of why Audi is so good at diesel. 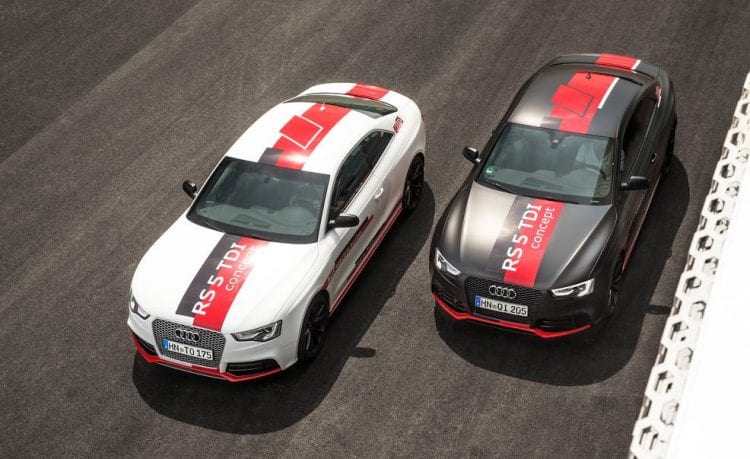 Not only have they gained diesel expertise from using diesel engines in virtually every model in Europe, but they’re practically the inventor of the high-performance diesel engine. Nowhere is this more obvious than in the arguably toughest race on the planet, the 24 hours of Le Mans. Audi has won it a staggering 13 times and despite winning lots of other 24 hour races around the globe, Le Mans is the track to win if you’re going to win anywhere. It’s the pinnacle of motorsport and one of the best spectator events all year round. Obviously, winning it 13 times should give you an insight into diesel engines, especially high-performance ones. 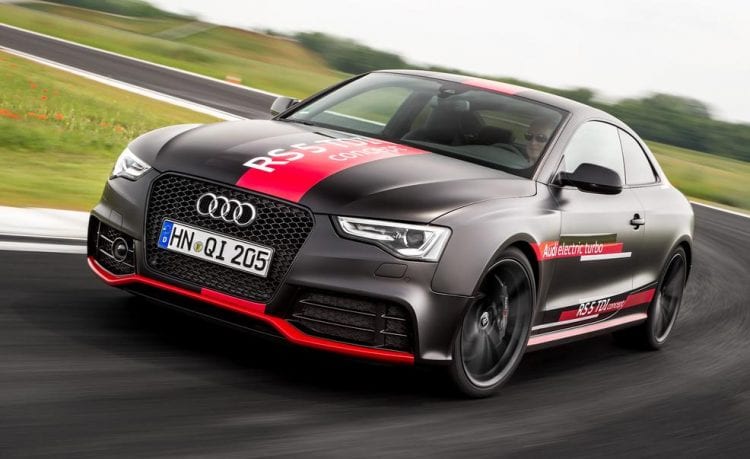 The 385 horsepower 3.0 liter V6 TDI in the RS5 TDI is a prototype (although sources say it’s similar to the race engine and even the production 3.0 liter V6 found in many applications). The unit closes the gap between a petrol engine and a diesel one or to put it better; it aims to make diesel the more dominant unit by combining the best traits from the gasoline and blending them in with the strong side of diesel. And as we know, a diesel’s advantage is the torque, something this V6 TDI has a lot of. 553 pound-feet of torque to be precise. They all arrive at just 1,250 rpm, making it a rocket ship right from the get go. There’s no delay here; turbo lag is reduced almost to zero. Put your foot hard down and the RS5 TDI instantly leaps forward with a charge that a petrol engine simply can’t deliver. They tested it against a 553 horsepower RS6 Avant V8 and the result couldn’t be more surprising for gasoline enthusiasts. In a drag race, the RS5 TDI blew it clean out of the water, beating it by several car lengths.

The midrange is also great. There’s no noticeable turbo delay or lag; the whole thing just leaps as soon as you even go near the throttle. It honestly feels like a naturally aspirated engine despite the fact that it’s anything but. For a diesel, it’s rev-happy, to the point that it almost feel petrol-like in characteristics. It will rev to an astonishing 5,500 rpm. It sprints to 60 mph in around 4 seconds, and the 100 mph mark is hit in around ten seconds. The top speed is nothing short of breathtaking too, as it stands at 174 mph (it’s possible it’s limited). Despite the increase in torque and power when compared to the 313 hp V6 TDI it’s based on, it uses less fuel on average. According to some estimation’s we could expect this vehicle to return 20/29 mpg in city/highway driving. Now that is the diesel’s strong side, and we haven’t even gotten to the best thing about the RS5 TDI. Because you see, the RS5 TDI is no ordinary diesel or car for that matter. The crucial key to the insane numbers and mind-blowing performance is a Valeo electric supercharger. It sits on the cold side of the intercooler and thanks to a super low-inertia rotor; it can react in just 100 milliseconds, spinning at up to 70,000 rpm. It operates independently of engine revs or load. Because of this, you can use the engine’s twin turbochargers to achieve maximum boost, a simply unbelievable 49.3 psi.

Therein lies the secret of this unit. The 385 horsepower figure is produced by the engine and turbochargers alone, with no assistance from the supercharger (at 4,200 rpm). The ample amount of torque (553 lb-ft) is available from just 1,250 and it carries all the way to 2,000 rpm. Although at first look similar to BMW’s tri-turbo inline six, like the one in the M550d, what separates the V6 TDI from BMW’s unit are the responsiveness and the immediacy. Having power is one thing, but making it feel like a high-performance engine another. The BMW has power, agreed, but it delivers it in diesel like fashion, with traditional diesel characteristics. The Audi’s unit is much more petrol-like in feel rather than diesel. 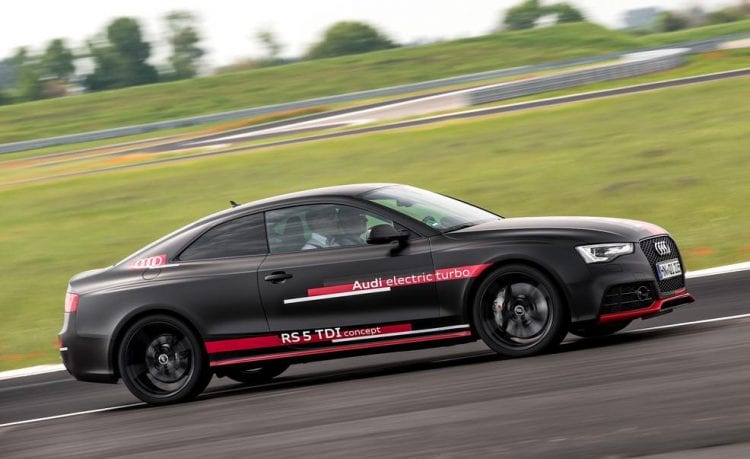 Ideally, Audi wanted to fit their seven-speed DCT transmission in the RS5 TDI, but it proved to be too weak, not capable of withstanding the immediacy of the torque. So, they went for the next best thing (for some better), the ZF 8HP eight-speed auto.

With the recent events engulfing diesel engines, more and more experts are predicting the death of the Otto engine as we know it. It’s only a matter of time before it gets replaced with electricity, but for the moment we can rest assured knowing diesel are constantly improving, so much so that we can now even claim a diesel car can be sporty.

It’s not a secret that vehicles from Audi can be quite pricey, and the Audi RS5 TDI certainly fits nicely into the profile of high luxury and performance oriented cars we are used to getting from a German carmaker. The diesel version is currently only a prototype, a concept, but with insane results, it returned we wouldn’t be surprised to see it offered to the market. At this point, we only have estimated prices for it and few sources suggest it could be sold for about $75,000. It is more expensive than the gasoline-powered brother and currently available model started at slightly less than $71,000.