Audi R8 began as a racing test mule at the Lemans in 2000 winning in its first entry. Following five years, it built the record of championing the Lemans in a continuous row. Production started in 2008, showing Audi could create a streamlined, mid-engine car with the appearance and stance of a sports car. Now, German carmaker is bringing the next generation R8 as a 2017 model with a lot of engineering testing done on its Modular platform which is used for a sports car.

An earlier version of R8 and Lambo Gallardo were based on the same platform. Keeping the tradition this time too, both cars share the same platform. MSS stands for Modular Sports car System that is also used in Huracan prepared by Lamborghini. Audi unveiled the latest R8 Spyder V10 at the 2016 New York International Auto Show and we can say that it is entirely designed and developed by Audi AG’s high-performance division, Quattro GmbH.

The 2017 Audi R8 Spider is mostly built on aluminum monocoque structure. Modular sports car platform uses an integration of Carbon fiber and Aluminum, which exploits the best qualities of both materials. Easily formable aluminum with lightweight and high strength carbon fiber makes the best combination for preparing a safe sports car. The new body is about 70 lb lighter than the present R8 Spyder while the overall mass reduction of 110 lb has been achieved. Also, the new body is 40 percent more rigid than the current version. All credits go to a set of cross structure, one on top of the engine and on the back bringing this improvement.

Find out more about Audi A9!

With sleek styling and unparalleled engineering, new Spyder appears every bit the contemporary car. New R8’s visual appearance is a progression of the spectacular first-generation model. Exterior design follows Audi’s clear understanding of Bauhaus inspiration, with traditional trapezoidal grille encouraged by the Auto Union Grand Prix cars of the early 1930s. New R8 has a low stance ride height of a supercar, with the cab hard-pressed forward design. The coupe profile is slanted back in a streamlining flow to the rear spoiler.

R8 Spyder design stress on parallel creases giving the sides a wider shoulder. Keeping the tradition, the popular trapezoidal shape grille creates a smooth flow into the wedge-shaped devil LED headlights. The new grille has made wider and tweaked to suit the front end making it even more aggressive. Note that Audi R8 was the first production car to offer full-LED headlamps as standard. The R8 Spyder top deployment is one of the fastest in the market and can be upraised or let down at speeds of up to 31mph, everything is done in about 20 seconds. Even with the roof in place, the driver and passenger have a better option to feel the R8’s aggressive soundtrack.

In typical Audi style, interior design is logical and pragmatic yet lavish. Inside, the large 12.3-inch infotainment monitor and the ergonomic control layout dominate the new interior for the Audi R8. A complete package of for track apps is offered including the possibility to record times, outputs, and more are added for delivering pure driving pleasure. The visual display covering the tachometer and speedometer in the instrument cluster can be tailored according to customer choice. Otherwise, the whole scope of MMI apps and navigation infotainment inclusions are normal in the R8 Spyder. It consists of Audi’s latest natural-language voice control scheme, which uses microphones set into the seat harnesses for better audio clarity. 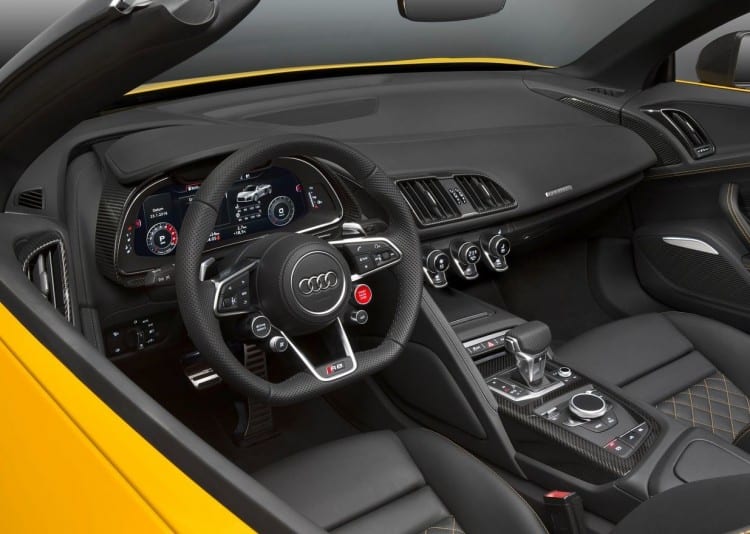 Audi’s Virtual Cockpit is another tech gig in the Spyder version. In the new version, it is built-in a classy environment and importance is given for its touch sensation. The optional Bang & Olufsen stereo features 13 speakers, counting two in each head support. The seats are exceptionally comfortable and the interior is quite amiable as well. Audi claims NVH (Noise Vibration & Harshness) inside the car are much lower than on the first-gen R8 Spyder, nevertheless, a test drive is the only method to confirm this claim.

The 5.2 Liter, V10 engine churns out whopping 540 hp and 398 lb.ft (540 Nm) of torque. It takes only 3.6-seconds for a 0-100 km/h (0-62 mph) sprint thankfully to this powerful setup. Buyers will be further impressed fun-filled driving experience of R8 Spyder and acceleration from 0 to 200 kilometer per hour in less than 12 seconds. R8 Spyder brings a host of improvements and it supplements the performance car’s popularity. 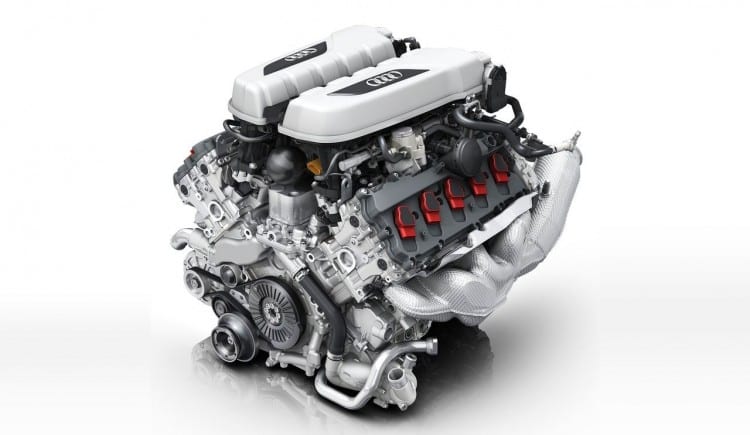 Audi R8 Spyder employs direct injection, which assists in a flawless combustion of fuel and thus improves fuel economy. According to reports, the maximum speed of the Spyder model is 197.6 miles per hour which is only a mile or two slower than a standard version. Audi R8 employs state-of-the-art Cylinder-on-demand (COD) and dual injection, which helps to reduce fuel consumption considerably. The new S-Tronic dual clutch transmission has a freewheeling mode that further improves the fuel economy. The freewheeling is activated when the driver release their foot off the accelerator at speeds above 34 mph (55 km/h), which separates the engine from the drivetrain to coast freely.

The power that engine delivers is passed through Quattro four-wheel drive that is paired with a seven-speed transmission, which helps you to tackle tough terrains with much ease, and to always get the maximum amount of grip. It is powered by twin clutches that assists in quicker shifts and improved driving experience. It also helps to de-clutch front wheels automatically when not required and thus enables rear-wheel drive.

Chassis and suspension are made of aluminum and steering is controlled with the electro-mechanical assist. Steering ratios vary in accordance with its velocity and you might need some time to adjust to this. Active dampers help to smooth overall ride comfort when you are not pushing this vehicle to the max and to improve handling when you are on track or you decide to attack few corners at higher speeds. The 19-inch alloys come as standard on Audi R8 Spyder while the larger units are optional. Carbon fiber brake discs are also optional and carry a high price tag but you will certainly feel the difference if you opt to choose these.

Competitors on the Road & Track

Angus brown is the latest shade scheme added as a color choice. Specially made components, such as suspension, diffusers & spoiler, are available as well as accessories and one can make the choice to suit the requirements. New Audi R8 brings a combination of luxury, ride quality, dynamic handling and track thrill to the auto enthusiasts across the globe. 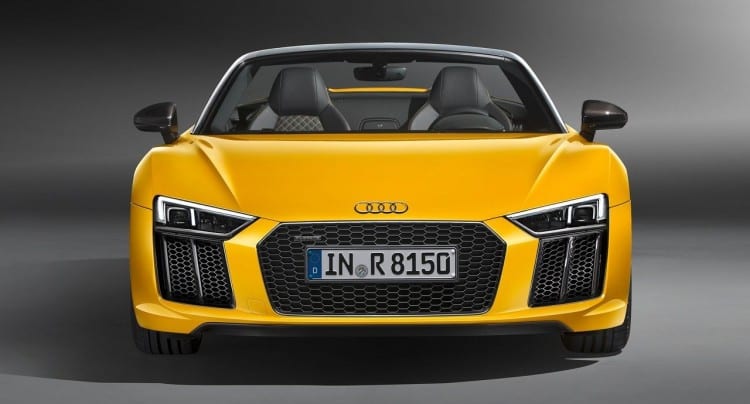 The R8 Spyder is expected to give a tough competition to the rival models such as AMG GT, Chevy Z06, and 911 Turbo. One of the problems it might encounter is the pretty high price of almost $200,000. Overall 2017 Audi R8 Spyder is designed to entice automobile buffs and scores well with its class.