Audi used New York Auto Show to present a special edition of R8, delivered straight from hands of Audi Sport division, previously known as Quattro GmbH. But if you were not convinced with a mere paint job and some visual interior tweaks, another thing just debuted at the same car show that might attract your attention. That would be the 2017 Audi R8 LMS GT4.

First, let us tell you what GT4 part of the name stands for. GT4 European Series is sports car championship in which all amateur drivers can participate if they can afford it. Cars used for racing are based on production models, performance is limited and below more serious GT3 class. Audi already offers hard-core R8 LMS version for GT3 racing class, but that thing is priced at $450k for a car alone without any participation fees and other costs, so this version might come handy with more than halved price tag of $200k. 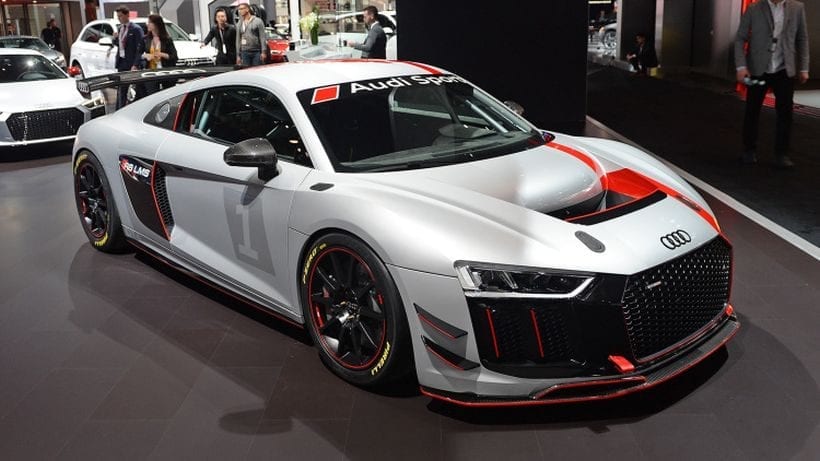 This is the least thing that you care for when participating in the racing championship, but let’s give it a go anyways. This is supposed to be a lesser car than GT3 version, so it is less distorted from the regular version. We could even say that Dodge Viper ACR is more visually dramatic thing despite being legal for public roads, contrary to this Audi. This doesn’t mean that it is not menacing at all.

We have front fender gills, large hood opening, different front splitter, double sized rear wing compared to the regular model, and high mounted, central, rectangular and enormous exhausts pipe. The car is painted in silver-red theme, and it leaves a nice impact on your senses.

Interior is denied of any luxury amenities or pretty much any type of convenience at all. That would also include things like dash’s plastic, floor mats, and seats, so wherever they could strip something, they’ve done that. In return, you’ll get a roll cage, roof hatch, safety nets, fire extinguisher, and doors filled with crash foam.

You well know that, when you brake 1G of lateral acceleration in the corners, you don’t need Apple CarPlay, but you might need that roll cage. And one more thing, yours and only seat in the car found its way from GT3 model, and you’ll never see something thinner and more absorbing once you managed to climb in it.

This may baffle you if you are not familiar with GT4 racing. Under the hood, we have same naturally aspirated 5.2-litter V12 delivering up to 495 hp. That is almost 50 hp less than in “normal” R8 and 115 hp less than in R8 Plus version. Don’t let that confuse you, as power and bunch of other stuff is regulated by FIA so that all cars participating in GT4 series remain similar to each other in performance.

AWD is not permitted, so in this case, it comes with RWD helped with mechanical LSD, while getting torque through 7-speed dual clutch automatic. 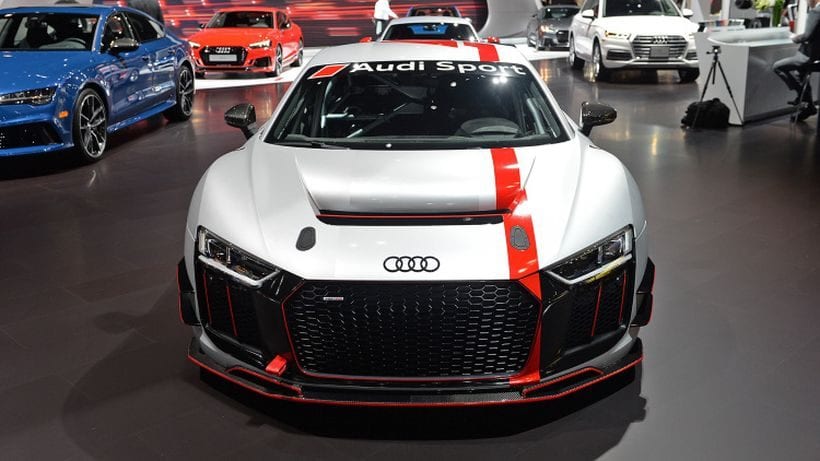 WHAT CAN I DO WITH IT?

Despite 2017 Audi R8 LMS GT4 shares 60 percent of stuff with any other regular R8, that 40 percent is making it pure track beast. All those losses in cabin shaved the weight by a significant margin, fancy aerodynamic bits and pieces will glue you the tarmac as well as a hard-core suspension and bushings. Furthermore, we have a special cooling system that allows you to lap it endlessly, while extra grippy Pirelli P Zero competition tires will let you break that lateral 1G from regular version easily.

So, you can take it and try your luck with a bunch of other amateurs and see what you are made of.