2017 Alpina B5 has teased us ahead of its official debut next month, and we can say that it looks mighty impressive. New B5 is based on the ongoing generation of G30 BMW 5-Series. Unlike regular version, Alpina B5 has more luxury, better performance and is more comfortable. It is positioned between regular 5-Series and M5. Compared to M5, the B5 model shares a lot of traits with it but lacks that sporting edge. We can say that it is more conservative than M5.

Design wise we don’t know much because of heavy camouflage, but the looks will be close to the ones of 2017 BMW 5-Series with official details added by BMW’s unofficial tuner Alpina. These features will consist of different body kit, multi-spoke wheels, and quad exhaust pipes to differ it from 550 and M5 models. What is even interesting is that the B5 will come in sedan and wagon versions so you can imagine how that performance wagon will look on the road.

Regarding the interior, it will most likely be the same as it is on the latest G30 5-Series with Alpina tuning marks. Equipment and safety systems will be transferred completely while the seats and shifter will be changed to give clear signals of a performance vehicle. Different color choices for seats and interior alike will be available. Of course in colors of Alpina tuning company. 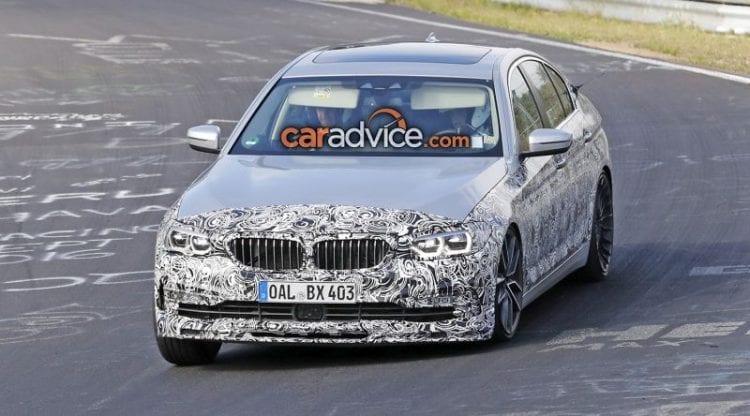 Under the bonnet, 2017 Alpina B5 will continue to use a twin-turbocharged 4.4-liter V-8 which will have 600 hp available at the press of the pedal. Thanks to the lighter materials used, new B5 is going to shed some weight and consequentially it will surpass performance numbers of the previous version. The new model will be able to go 0-60 in 4.2 seconds with a maximum speed of 204 miles per hour. Transmission of choice will be the BMW’s standard 8-speed automatic which will be differently tuned to allow quicker shifting of gears.

Competitors – All of them

With this model being a German luxury performance vehicle most of its rivals come from Germany. From its closest rival Merc, we have Mercedes-AMG CLS63 S 4MATIC. Moving a little down the line, we have Audi and its models: 2018 Audi A6, 2017 Audi RS7, and 2018 Audi A7. Next domestic rival is Porsche with its 2017 Porsche Panamera, 2017 Panamera Turbo and Panamera Turbo S. At the end of the list we have internal rival 2018 BMW M5 and American horse for this race the 2017 Cadillac CTS-V.

Alpina B5 is scheduled for Geneva (show starts on 9th of March) debut. Official sales date is not known at the moment, but with the car close to its completion and with a timeline of introduction already set, we can expect first models of B5 on the road before the summer.