Italian’s are noisy. They talk a lot, and they wave their hands. CEO of FCA corporation is Italian. He also talks a lot and promises a lot. The successor of 159 has been promised many times and time has passed, and passed, and nothing was happening. Then all of a sudden, well not exactly like that, as everybody was tired of waiting and delays, Alfa presented its bid to premium sedan segment and what the car it was.

The first thing that we saw in 2015 was not regular Giulia it was the hottest possible version of it, Quadrifoglio. Since we already wrote about 2017 Alfa Romeo Giulia Quadrifoglio, this section is specially dedicated to brakes, while there will be some more for all of you who missed our articles in the past. 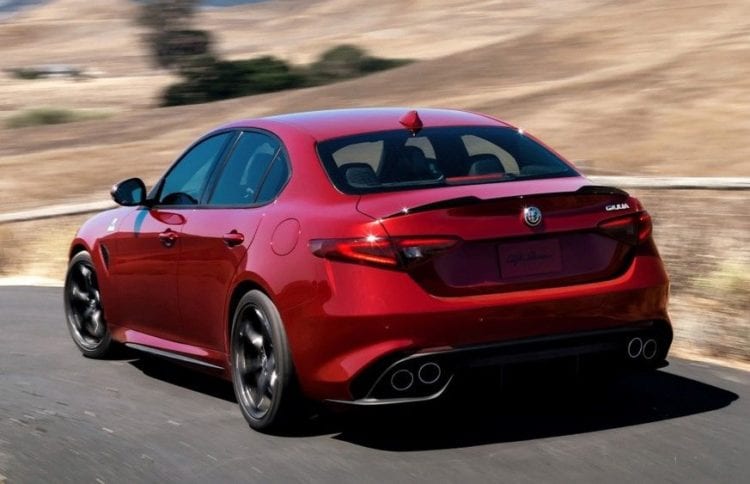 Giulia Quadrifoglio is a rocket. It lapped Nürburgring in just 7:32. But everything has to stop at some point and being propelled via engine created by Ferrari’s engineers it needs to stop good, very good. For making that possible, count on Brembo brakes with 14.2-inch front and 13.8-inch rear discs. Both brake discs are huge with four-piston aluminum monoblock calipers painted off in red of course. All the holes on rotors are cross-drilled which improves contact between pads and it and also offers better heat dissipation, besides looking cool.

Brembos are worthy of their name, as with maximum push of brake pedal car stays in straight line, while nosedive is hardly noticeable. Some of the praiseworthy also goes to Pirelli P Zero Corsa tires, measuring 245/35ZR19 at front and 285/30ZR19 at the back, which are tremendously grippy and thus eliminating all possible quirkiness. ABS is not going to corrupt any fun as it is turned only if you truly encounter uneven road surface heavily spoiled with gravel or dirt.

Fading? If you lap Nürburgring with 7:32 of time in sedan, be pretty sure that you are not going to encounter it, although the car that actually went through those laps presumably had optional carbon ceramic brakes. On another hand, amazement with brakes does fade when you take it for a ride around town. The pedal is super sensitive with only 1.5 inches of the path to travel, which is great for track, where you have two preferences for it- fully pressed pedal or untouched one, but in normal life, it will shake all your bones every time you touch it. On the bright side same pedal works fine during highway speeds.

FOR THOSE WHO MISSED PAST WRITINGS

And for those who wants to be reminded on glorious figures of this sedan. A special type of Giulia is propelled by 2.9-liter V-6 delivering staggering 505 horsepower and 443 pound-feet of torque, which is enough to shame 425 hp BMW M3 and in line with Mercedes-AMG C63 S offering 503 hp. It can hit 60 mph in just 3.8 seconds which is slightly quicker than mentioned rivals.

It is remarkably 200 pounds lighter than the same rivals, which makes its power to weight ratio lower than 3 kg per hp since it weights 1530 kg. Top speed is astonishing 191 mph. Also, this is the first RWD sedan from Alfa after discontinuation of 75 model in 1992. In fact, this is first proper, amazing and true Alfa in years.