Alfa Romeo seems to be on a roll. Their most recent endeavors, such as the Giulietta and the Mito proved to be big hits for the company, bringing it back into the top-tier manufacturers. This is before we even mentioned the 8C inspired 4C small roadster which we all fell in love with. It’s said that an Alfa Romeo wins you over with its character and looks, but they have evolved, offering so much more than that.

The most recent model that has been announced is, weirdly, the standard Giulia. We say weirdly, because we’ve already seen the flagship QV model, and we only get a glimpse of the standard version after. But think about it harder, and you realize what a good marketing strategy Alfa is playing.

By unveiling the top of the line QV model, you introduce everyone to what an Alfa can and should be, winning their hearts over. Once that styling and those numbers subside, you then present the standard version. The problem is, many companies have tried this, but the standard cars were so far off from the flagship model they were two different vehicles. Well, not so with the Giulia. Even with the base version we are getting a car that will be quite interesting to a large number of drivers.

For starters, just look at that exterior. We mean really, can a car get any more handsome? Doubtful. Much to everyone’s surprise, even the standard Giulia looks astonishingly beautiful. All of the features and styling elements from the QV can be found here, minus some sporty QV exclusive features of course. By this, we are talking about aero bits. The aggressive front, the flowing midsection, the sleek and elegant rear, it’s all here in a much more affordable package.
Just like on the QV model the front of the Giulia has the triangular center grille, even with the chrome outline. There are the same corner vents, although they do appear to be slightly smaller. Sadly, the small vents located on the upper corners of the front fascia have not been included in the base model. Because it’s an entry model, it’s missing the front spoiler too, giving it a flatter look from the front. The same can’t be said for the headlights and the hood which seem the same as the sportier version.

The sides are probably the only thing to be a full copy-cat from the QV model. Everything is here, from the wheels that are optional, down to the same indented features and lines when looked at from a profile. Speaking of lines, the sedan has been criticized for looking too much like a 3-Series or a C-Class from the side alone, but we’ll gladly dismiss these accusations as untrue. The roofline may be similar, but that’s just because it’s a sedan. Other than that, it’s Italian Alfa styling all around.

And yes, that does include the back where even the taillights are the same. The biggest difference is the spoiler on the decklid which isn’t featured here, and perhaps the smaller rear diffuser. Because it uses different engines, it has no use of dual exhaust ports on both sides, so here you’ll only find a single outlet on each corner. We really like how Alfa have kept the spirit and styling of the QV in the base Giulia. It’s honestly a car to just stare at all day long and to admire its beauty.

The interior is very interesting, to say the least. For one, there’s something called a “human-machine interface.” It is Alfa’s very own branding, developed in-house, and it basically means that all car controls have been fitted into the steering wheel. Thus, this interface is utilized as connection, between you and the car.
Two buttons on the center console are responsible for controlling the Alfa DNA system through the 8.8-inch screen, which also has the Connect 3D Navigation infotainment system. Keeping in line with the human-machine interactions, you have voice activation for mentioned infotainment system, and it’s compatible with Android and iOS. The navigation is a very smart and sophisticated piece of technology. It’s capable of locating you with the use of 3D maps and Dead Reckoning. It doesn’t even need a GPS signal.

The entire cabin is wrapped in gorgeous leather. Even the plastic bits are excellent because soft to touch materials has been used. No word on specific interior trims, but from the images alone we can safely say there’ll be two or more to choose from. Either way, you get a lot of customizability with every trim option, thanks to the generous color palette and various inserts and accent options. 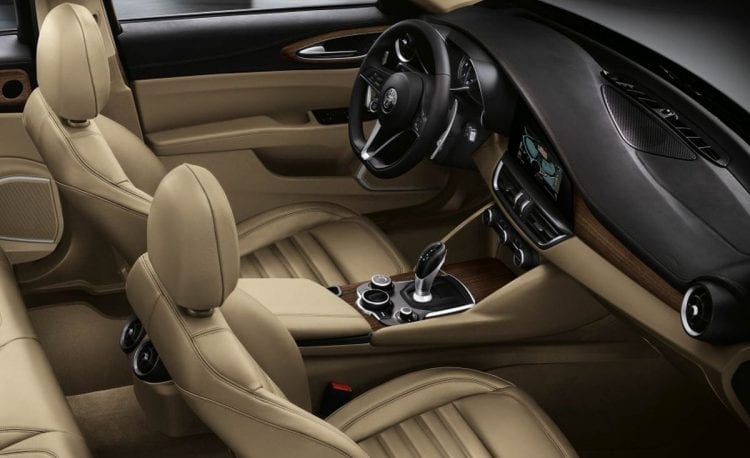 Sadly, we won’t get to see the 2.9-liter 500 horsepower monster in the base 2017 Alfa Romeo Giulia. It does, however, come with a single gasoline option and two diesels, or variants of it to be more specific. The gasoline engine is a 2.0-liter four cylinder developing 200 hp and 243 lb-ft of torque thanks to a 2 in 1 supercharger. The engine is mated to the new eight-speed auto transmission, and power is, just as for the competitors, sent to the rear wheels only.
The diesel engine is a 2.2-liter four cylinder in two guises. The less powerful one develops 150 hp and 280 lb-ft of torque while the more powerful ups the figures to 180 hp and 331 lb-ft of torque. The same eight-speed auto can be opted for, or alternatively, you can go for the six-speed manual. Alfa expects the diesel and manual to be more popular in Europe while the auto and gasoline engine should do great work in the U.S.

One big difference to note here. The U.S. version of the Giulia uses the same 2.0-liter four-cylinder petrol engine, but it will develop 276 hp and 295 lb-ft of torque. The sprint from 0 to 60 miles per hour is over in just 5.5 seconds. There will be a Q4 version with an all-wheel drive system, but no exact details on performance or fuel consumption just yet. 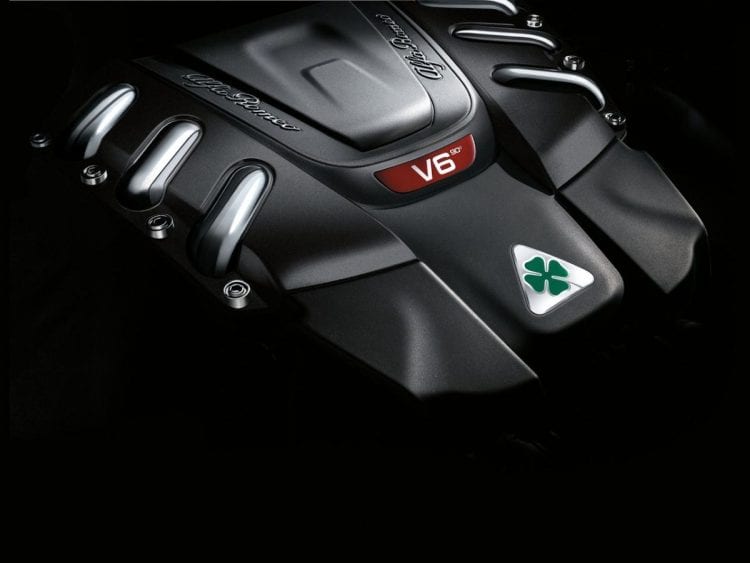 Whether you live in the U.S. or Europe, the Giulia makes a great proposition on the luxury sedan market. Prices should start out at $50,000, and we suspect Alfa will sell a ton of them based on the looks alone.