Very recently, Acura decided to tease us with images from the new and improved MDX. Well with the New York Auto show behind us, we learned everything about the new model that we weren’t able to tell just by looking at the pictures. We were honestly surprised by the amount of changes that went into this new car. Just like any redesign, the MDX offers different exterior as well as interior, spicing things up a bit. The technology front brings new safety and driver assistive systems which shoot the MDX from one of the top contenders to the absolute top, becoming the benchmark to beat. Let’s not fuss about and get straight into the exciting details of the 2017 Acura MDX.

The first thing to strike you is just that, its design and fantastic looks. Immediately you will notice how striking and aggressive it is when compared to the older model. The hood is re-designed with three brand new and unique body lines, adding a nice amount of separation to the otherwise large and bland bonnet. The front fascia is decorated with Acura’s diamond pentagon grille, as seen first on the Precision concept. It centers beautifully down the middle of the car to form the recognizable diamond shape and gives the car a classy look.

The air dam too has been lengthened to enhance the sleek design further. Side vents have received a re-touch with a horizontal louver in the middle, and even fog lights now come with LED technology and are placed on the outside edges. The top and the sides get a trim accessory, completing the front fascia with a significant improvement over the last model.

It’s no surprise that the side profile is the same because it is the same car after all. The bodyline and the roofline remain largely intact. It’s the same line running from the wheel arches at the front to the ones at the back. Being a premium car, the door handles are obviously chromed instead of body-colored, and so too are the side skirts which feature trim inserts made out of chrome.

The rear segment too is very similar; especially the taillights and the rear hatch. Although keeping up with the rest of the car is a chromed insert in the hatch handle. Below that, you’ll find the most significant changes made to the MDX. The entire lower fascia is now body-colored rather than the very cheap looking flat-black garnish as seen on the previous model. This doesn’t just give the car a more upmarket appearance but changes the entire rear part look too.

Let’s not forget to mention the rear also features vertical reflectors which have been integrated into the corners of the vehicle. There’s a dual exhaust with a slanted rectangular shape as a final touch. Just on looks alone, we consider it a winner already. The old one wasn’t bad, but the new MDX takes the same direction and brings it up by two or three levels alone.

One thing we failed to see on the original teaser images of 2017 Acura MDX was the interior. Well, we’re finally able to tell you a few things about it and boy do we have high praises. Getting in it, you may think it’s the same interior, just a carryover from the old car. But take a closer look and you’ll see things aren’t as they appear, we are now getting more in this department also.
For starters, the dash has been pushed in on the passenger side, giving more room for the co-pilot. The knee bolsters further help this by managing to get smaller and more inwards. The materials used are still top-notch; just we used to get in this market. Acura says they’ve improved the overall quality and fit and finish, but honestly, the old car was so good it’s hard to tell the difference unless you have them side by side and even then you might struggle. Improvements might be more obvious after several years of harsh usage when it may look fresher than the one in older version but only time will tell if this is true. 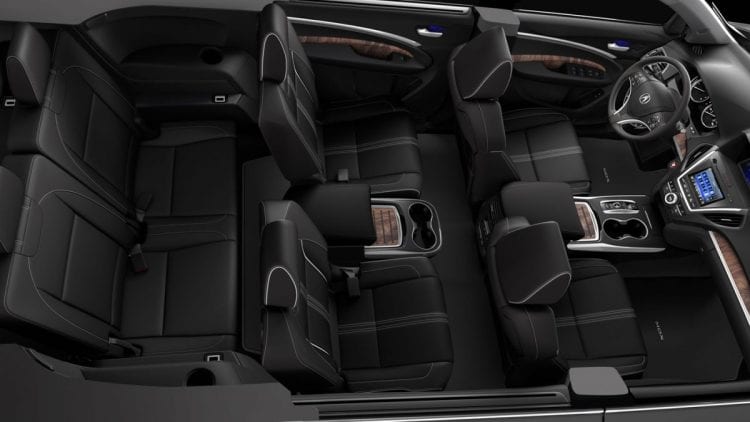 There are still two displays on the dash just like in the previous model. One is for the infotainment and the other for the navigation system. Some people might think it is silly or confusing having two separate screens but in all honesty, it keeps one data away from the other. So, for instance, you can have the map shown on the nav screen while changing radio stations or something similar. It’s useful when you think about it and gives 2017 Acura MDX even higher class fell.

The instrument cluster follows suite. It’s got some minor changes, not enough to be a whole world apart but just the right amount. The display between the speedo and the tacho has been erased, but in all honesty, no one’s going to need it or indeed miss it. Among other features, we can add that the Automatic High Beams are standard, and so is the SiriusXM Radio.

There’s more than enough headroom and legroom for both front and rear passengers, although those wishing for even more space can opt for the captain’s chairs for the second row of seats. You do lose one seating place but gain a whole lot of legroom and elbowroom as a bonus. Pick your choice. 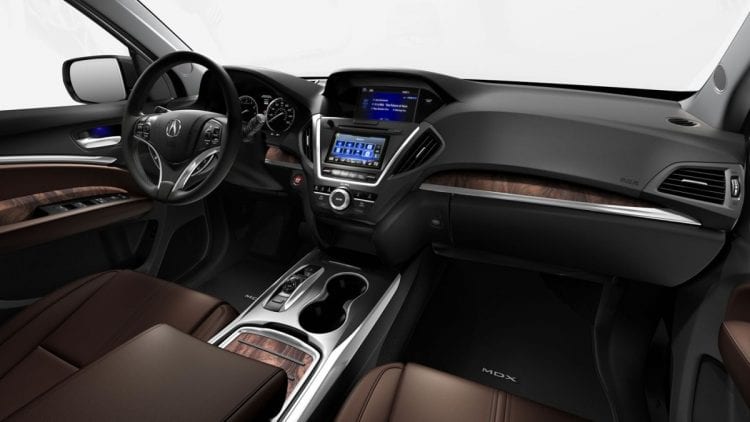 The standard car gets a revision of the 3.5-liter V6 in this guise developing about 290 hp and 267 lb-ft of torque. It’s pretty much the same engine with some minor tweaks but we’re not complaining, it’s a strong and reliable unit, and we’re glad Acura is sticking with it.

There’s also the MDX Sport Hybrid version boasting a 3.0-liter V6, propelling the car along with three electric motors. The combustion engine and one of the electric motors send the power to a seven-speed dual clutch transmission which then, in turn, powers the front wheels. Two other electric motors are located on the back axle, one for each wheel. It’s a single unit but with twin motors. The hybrid delivers a total of 325 hp and is more than capable of achieving 26+ mpg on the combined run should you drive it carefully.

We really like the new and improved MDX. It takes what the old one was great at, and further improves it without losing any of its core values. At a starting price of $44,000 it is great bang for your buck too. Obviously, prices went slightly up but nothing major. For top level trims be prepared to pay more than $55,000 but then you will be getting pure perfection when it comes to luxury and comfort.