The Jetta has always been one of the biggest successes of the VW brand in the U.S. Although the Golf is easily more popular in Europe due to the hatchback preference of drivers, U.S. buyers aren’t that keen on small hatchbacks, so it’s no surprise the Jetta is the weapon of choice.

There was always one major issue with the Jetta, and it was the slow and inefficient base engine. Thankfully for 2016 model, amongst the new updates like a touchscreen interface and new safety tech, the base engine has been dropped and subsequently replaced with a new much better one.

The exterior of the car is classic VW, but it’s extremely boring. There’s no other word to describe it. Yes, it’s understated but only because it’s dull. Take the front for instance. There are the same headlights like the one on nearly every other VW model, including the Polo. The grille has three chromed lines running to the VW logo which is centered in the middle and the lower portion of the bumper has two fog lights on the sides. That’s it, end of the discussion, nothing more to add.

The side of the car is perhaps the single most boring thing we’ve seen on the planet. It’s literally just some car. A sedan shape and a sloping roof-line with no interesting elements, nothing to surprise us and to attract the attention. The doors are flat, and so are the wheel arches. There’s a small line that runs just above the door handles from the front of the car to the rear, but it’s so subtle you don’t even notice it’s there. The back part offers little comfort since it too is simplistic and functional but nothing unique. It’s not a bad exterior, but it’s hard to be good or bad when you offer nothing new or exciting.

The interior is a bit of a letdown too. Nearly every other car in this segment offers unique styling, or premium materials or even a mix of both. The Jetta sadly does neither. It’s so conservative that it makes a BMWs dash seem almost alien like. Yes, the very same BMW which is criticized for not making an inspiring or unique design. It’s not that there are bad features, it’s that there’s nothing to comment about. Even the Golf has a better interior, not to mention the Civic and the Mazda 3. Don’t get us wrong; everything is functional, but we know, and we agree, that many drivers want much more from their cars. 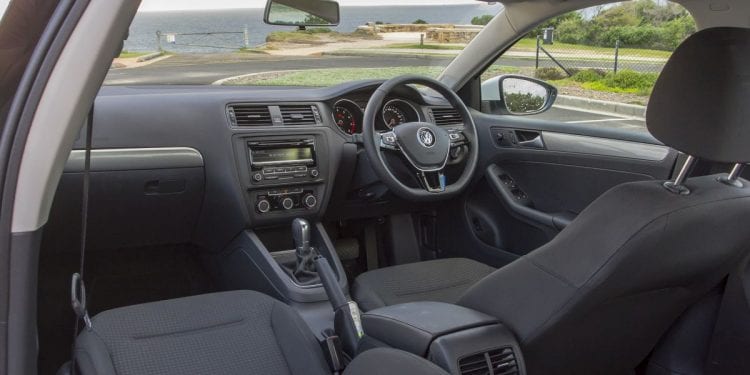 The materials used aren’t capable of taking the 2016 Volkswagen Jetta out of the mud. Higher trims do offer nice soft materials, but the base models are just plain wrong. You’d have never expected hard plastics and rough surfaces in a car from VW, but the Jetta delivers it. If you must go for a Jetta, at least spec it to a higher trim otherwise, you’ll be regretting your choice very soon.
Thankfully there is a decent amount of technology on-board now to offset some of those bad sides. The touchscreen is now standard for instance regardless of trim, and there’s even a bigger touchscreen that comes as an option. One of the best features certainly is the VW’s Car-et and smart-phone integration for both Android and iOS. In the technology front it’s about average in the segment and can cope with main rivals but barely keeps up.

Thankfully, cabin space and seating arrangement are unchanged. The seats themselves are nice, and the amount of leg and headroom is very generous. The rear seats alone trump every other backseat from the competition both in leg and headroom. The trunk space is 15.7 cubic feet, and it too claims a victory in the segment. In fact, it’s as big as some larger sedans, and if you decide to fold down rear seats, you are getting even more. 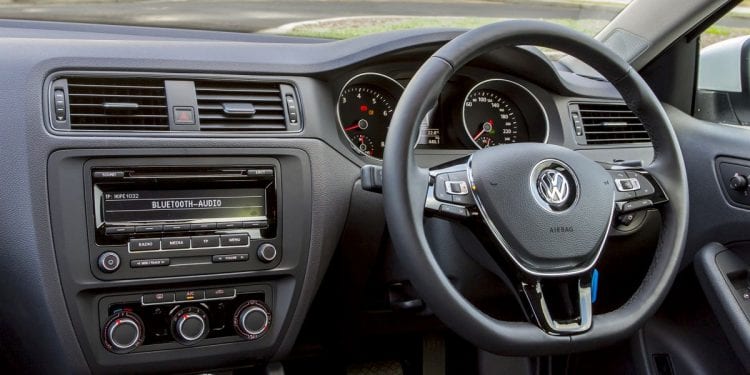 The best-selling points of the Jetta are the engines. Or should we say, they were the best-selling points? The scandalous emissions fraud that VW discovered in the past year put their diesel engines delivery in jeopardy. The most recent news in the time of the writing of this article is that VW will buy back nearly half a million vehicles affected with the engine fitted with the software for cheating emissions control. We have no idea if we’ll see the return of a 2.0-liter TDI that is legal as of yet.
We’ll start off by saying that there is no all-wheel drive Jetta. All of the models and engines talked about here send power to the front wheels. The base car comes fitted with 1.4-liter turbocharged four-cylinder unit that develops 150 hp and 185 lb-ft of torque. It’s a brilliant little engine that is mated to a five-speed manual transmission and has hill hold assist as standard. On the automatic front, there’s a six-speed box. Fuel economy is great at 32 miles per gallon on the combined run for the auto and 33 for the manual.

The more powerful 1.8 turbocharged four-cylinder makes 170 horsepower and 184 pound-feet of torque. It too is fitted with a five-speed manual in standard guise, but the same six-speed auto can be had as an option on the Sport trim and is standard with the SEL version. Performance figures are decent but do not expect to win many drag races. The sprint from 0 to 60 miles per hour is over in 7.4 seconds making it one of the quickest sedans in its segment. Fuel economy is 29 mpg for the auto and 30 for the manual. 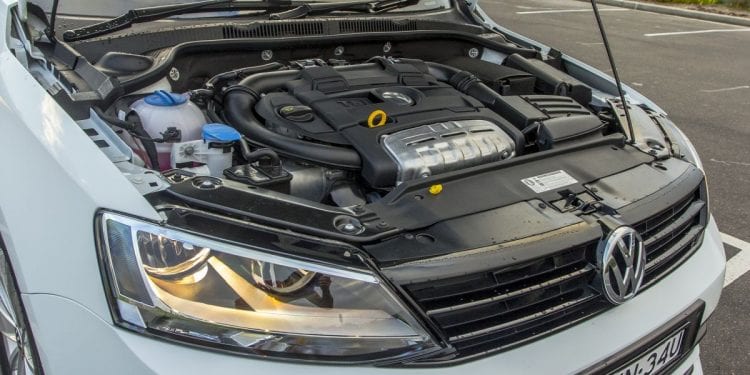 The most powerful engine is a 2.0-liter four cylinder developing 210 horsepower and 207 pound-feet of torque. But it comes with a six-speed manual rather than a five and can be even fitted with a DCT. 0-6 is achieved in mid 6’s ad it returns 27 mpg.
The most attractive offering is the Jetta Hybrid, which uses the 1.4T engine that works in conjunction with an electric motor here. It also gets a seven-speed automated manual transmission, and 0-60 mph acceleration is achieved in 7.8 seconds thanks to 170hp of total system power. Without a doubt, we can agree that those are decent results and on top of that we can add that it returns an excellent figure of 44 mpg.

All of the mentioned engines are great and pull the midsize Jetta just fine although the most powerful 2.0T is extremely quick. The drive is compliant and well damped, but there are some body roll and tire squealing. Even the 2.0T is not as good as the ST or the Golf GTI, but 210 hp will allow you to have at least a little bit of fun.

By far the biggest surprise is the hybrid which manages to achieve awesome mpg figures without driving like a hybrid. It’s more expensive at $31,000 however, compared to the base model’s starting price of $17,600 forcing you to think hard if you should go for one of these.