The Toyota Tacoma has always been a great option in the midsize truck segment. It never failed to amaze despite the strong competition in the segment. For 2016, it’s been redesigned and offers, even more, durability and off-road capabilities, coupled with the famous Toyota reliability.

The Tacoma still retains its recognizable characteristics and remains the weapon of choice for people wanting a truck but feel the full-sized ones are too big, expensive or just unnecessary. The winning formula has been kept the same and is largely unchanged, but there are a few upgrades which make it even better. 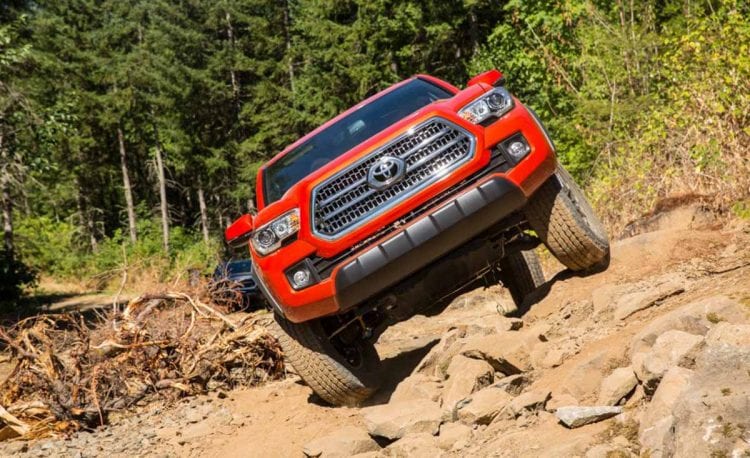 However, the regular-cab Tacoma is a version you find in the 2016 Toyota Tacoma line-up. The regular-cab was axed last year leaving just two versions available, the crew cab and the popular extended cab. Something new for 2016 is the implementation of raised suspension on all versions, including the rear-wheel driven Tacomas. They now share the same suspension height as well as ground clearance as the four-wheel drive models.

Starting with the beast’s propulsion, we find a choice of two engines. A four-cylinder engine with a 2.7-liter displacement and a bigger 3.5 liter V6. Both engines are available in an all-wheel drive platform or as a rear-wheel drive one, so the choice is all yours. Two wheel drive Tacomas have a six-speed auto, with the all-wheel drives getting an additional choice of two more manual transmissions. The smaller engine has five speeds and the V6 gets six.

As standard, the all-wheel drive Tacomas get low-range gearing. Because off-roading with a manual can be notoriously difficult, the manual versions get a mode which enables the driver to start the engine and shift into gear without depressing the clutch. This not only reduces rollback if you’re on a hill for instance but reduces clutch slippage further saving your clutch as well as various other components. 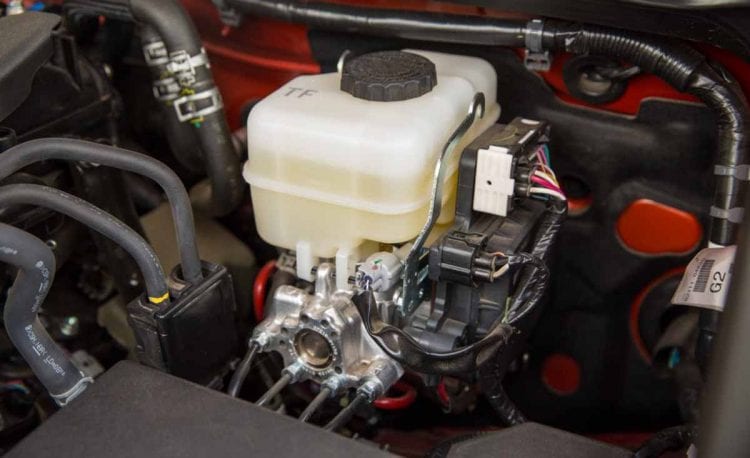 The two engine choices are more than powerful enough. The smaller four-cylinder develops 159 horsepower and 180 lb-ft of torque. It’s not a massive power figure, and certainly the torque number is no match for V8s or nearly every V6, but considering this is a midsize truck it’s more than enough to pull the car along even on steeper hills.

Now, of course, the smaller engine may struggle a bit on difficult off-roading, we’re not going to lie. But if you think that might be you then the V6 is the ideal solution. Power is up by more than 100 horsepower compared to the four-cylinder and stands at 278 horsepower while the torque has increased to 265 pound-feet of torque. This really is plentiful for the Tacoma and no object proves to be an obstacle for the V6 power. 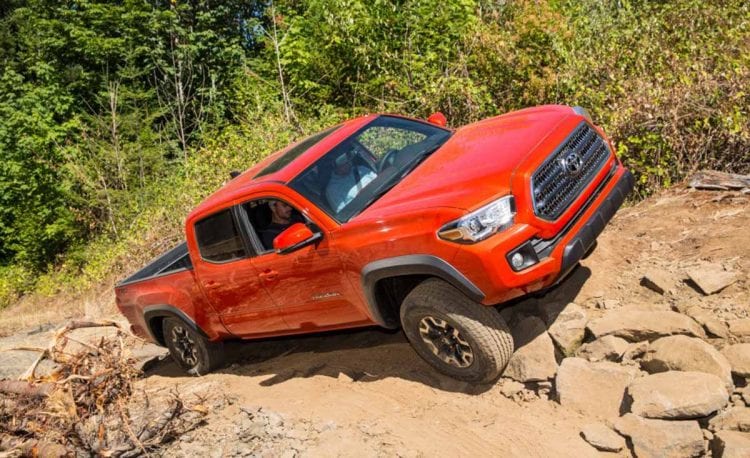 Although the engines aren’t a powerhouse by any means, they’re very capable for off-roading but sadly not that fast on the road or performance wise. The Double Cab TRD Tacoma managed a time of 8.5 seconds in the sprint to 60 miles per hour, slower than the previous generation comparable Tacoma and about one second behind the Colorado V6. We know that you will not take it on a race track and light to light races are not your thing but still it would be good to have better results. 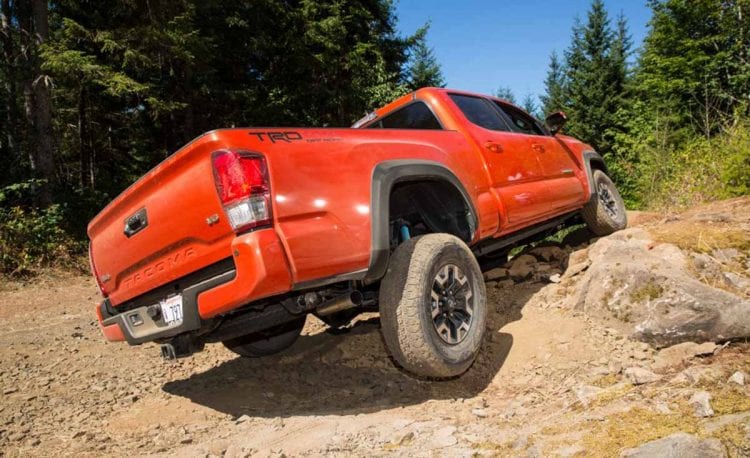 Hats off go to the refinement, however. The new V6 is noticeably smoother than the old 4.0-liter engine, despite it being slower. We suspect this might be a fault of the auto transmission, testing a manual one should prove it’s faster. Even then don’t expect a big improvement, however, if you want out of the box road performance look at the GM stand. Trim for trim they’re faster, no one can argue that.

If we’re honest, however, no one is going to buy a midsize or full-size off-roader for the 0-60 time or top speed for that matter. Thankfully the Tacoma redeems itself where it matters with a towing capacity of 3,500 pounds for the less powerful engine and 6,800 pounds for the top-spec Tacoma with the V6.

Despite such massive towing and off-roading capabilities, the Tacoma is compliant and comfortable on the road. It’s even got good steering feel, delivering good feedback which was a pleasant surprise. 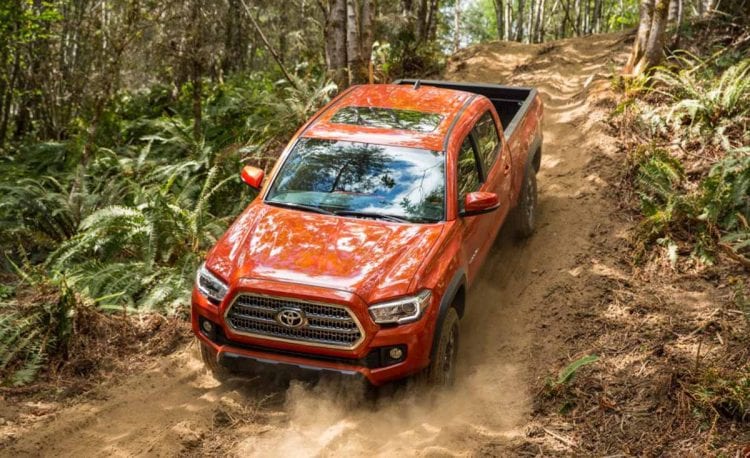 Body roll is present but not bothersome and the TRD’s off-road tires proved us wrong and rode beautifully even on rough pavement. Off-road is where the Tacoma takes the crown back from GM because it offers more ground clearance (9.4 vs. 8.4) and a lot more in approach angle segment (32 vs. 29).

Appearance wise, the 2016 Toyota Tacoma is a handsome looking brute. It’s a good looking off-roader, but we still think it’s no match for the F-150 and if you want an off-road monster you might consider recently announced 2017 F-150 Raptor version. Compared to the plain looking Colorado, however, it’s a beauty. The grille is massive and takes the entire central part of the front, and beneath it, the bumper sticks out with three jagged edges. The lights are not overly aggressive but look very good, especially with the Led lighting. 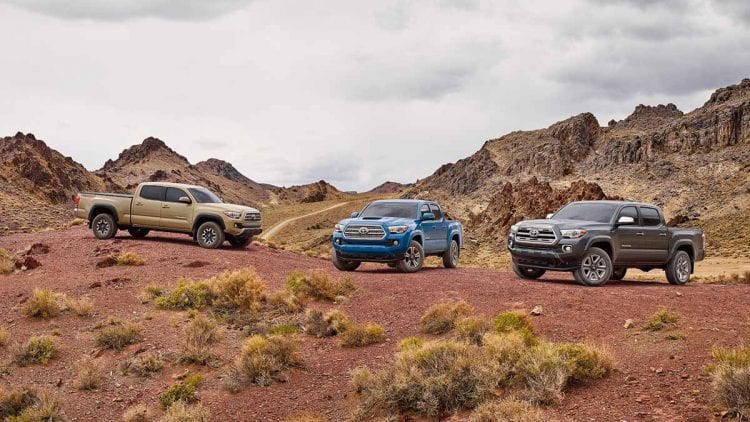 The body shape is a distinctive off-roader, but you can immediately tell it isn’t massive. Even in pictures it looks good proportion-wise. The Double Cab is the only version that seems a bit lengthy but even then not by much. The roofline is typical for a truck and mimics most of those in the segment, which is to be expected. The taillights are nothing special, but if you opt for the TRD package you get some cool TRD stickers in a few places which are a nice touch.

The interior is sadly an area where it disappoints. To say it is okay is being generous. The materials are average but the lack of adjustability on everything can be really bothersome if you’re taller. There’s no seat height adjustability and next to no range on the telescoping steering wheel. 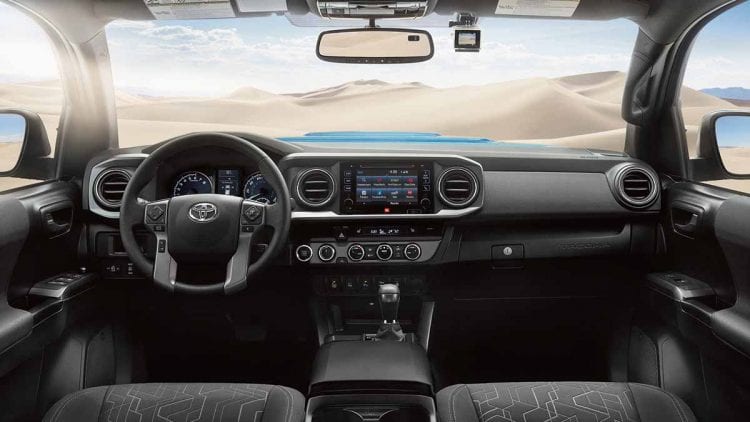 As soon as you sit in 2016 Toyota Tacoma you will get the feel that it is one made to offer durable interior with features that are not that representative. We are still getting a decent amount of comfort but materials simply aren’t of best quality. The top part of the center console comes with a display that will show navigation details and information’s on your truck.

Right behind the multifunctional steering wheel we have two analog clusters that show rpm’s and speed, these are divided by a smaller display that offers most important details and not much more. Various switches and control buttons are easily accessible on the center console, some of those are placed quite low but to be quite frankly we didn’t hear many drivers complaining about this. 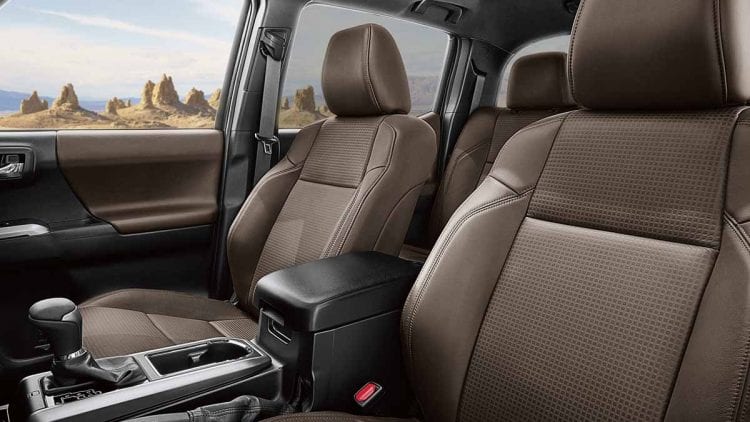 Besides a few little foibles we managed to find on the 2016 Toyota Tacoma, we can still say it’s a very good choice. If off-roading is your thing, nothing in this segment comes even close. Prices start at around $23,300 for the base two-wheel-drive model and go up accordingly.