The Toyota Prius is a car you either love or hate. It always has been, but lately, that seems to be changing. In a world where global warming is one of the main issues, the Prius proves to be an excellent alternative to the not yet fully developed electric vehicles lots of people are predicting for the future.

You don’t even have to want to save the planet to get a Prius. Lots of people are buying it for the fuel economy and running savings over a regular car. For the 2016 model of the Prius, Toyota has left nearly everything intact other than a few styling fixes correcting last year’s major re-style. The C in the name indicates that the car is fitted with Toyota’s Safety Sense package. It consists of multiple systems and technologies which are meant to aid the driver and protect the occupants. Other than that, you get a limited-edition version called the Persona Series Special which brings contrasting colors for the exterior.

The concept of the small city car is quite simple. Sacrifice a bit of performance and maybe comfort but gain a lot of affordability and efficiency. The days when small cars were cheap because they weren’t any good are long gone. The majority of subcompact vehicles on offer today are brilliant at what they do and fulfill their intended purpose more than any other car does. Take the Prius for instance. 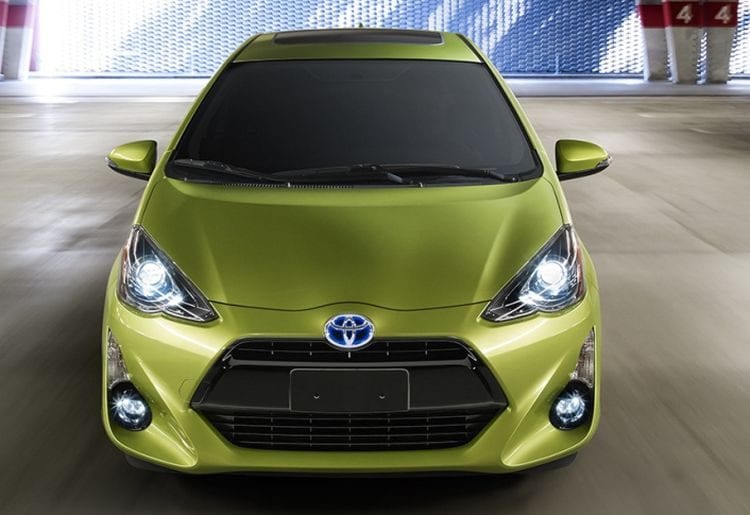 It’s an affordable version of an already affordable car. The Prius C is the least expensive Prius but also the smallest and the shortest, measuring in at 19 inches shorter than a normal Prius. If you’re considering buying a small car currently on the hybrid market, this really is one of the best proposals right now.

Starting off with the exterior, we encounter a normal looking car with decent styling. It hasn’t changed compared to last year’s model, but it didn’t have to. There’s absolutely nothing wrong with it despite the fact that it’s a little bit boring when compared to other vehicles in the segment.
What it lacks in styling, it makes in paint options. The acid green looking color is very eye-catching, and it’s difficult to miss this car in traffic. You’ll be immediately able to spot it thanks in part to the uniqueness of the color but also because it’s easily noticed. For anyone wishing a less conspicuous color, you have the standard range of white, black, red and so on.

The front fascia is reminiscent of an Aygo or a Yaris, but you can definitely tell it’s much bigger. The rear is okay too, but we especially like the wheels. Normally you’d expect to find them on a hotter hatchback and not a Prius. Excellent marks for Toyota are there offering much more attractive pack than it was the case with previous generations.

Inside, you’ll find mostly standard Toyota parts, but there are a few unexpected pieces. The gauges are located on the top of the dash and rather than being in front of the driver they’re moved slightly to the right but not completely in the middle. This makes them more driver oriented but visible to all of the occupants. There are a few accents mostly in black or chrome, but they still can’t distract you from the mediocre materials at best. They’re not awful, but a Fiesta or an Accent is on another level when it comes to that. 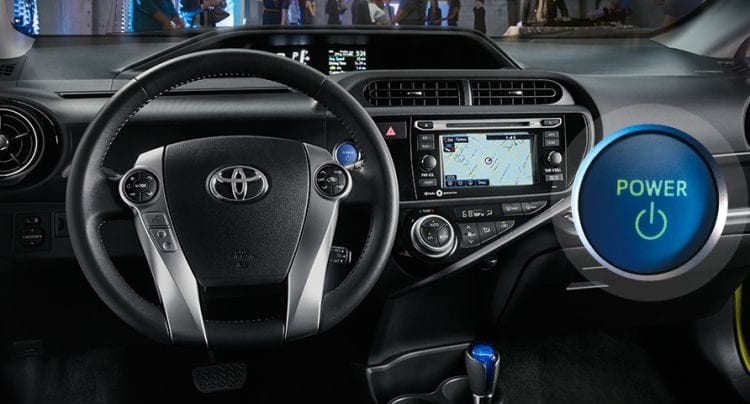 Redeeming features come in the form of a high-quality audio system and smartphone integration. It can be difficult to set it up, but once you do, it is smooth sailing. Plus there’s the Bing search engine, a Pandora radio, and even real-time information delivery system.

The driving position is fine if you’re a smaller person but taller and bigger people will have trouble getting in or finding their comfortable position inside the seats. The seats themselves are good and have some adjustability, but the steering wheel does not which is quite strange since this is available in almost all new vehicles on the market. What’s more, the dash is very tall and upright so that can prove to be a problem if you’re shorter too. The rear seats seem to have more room than the fronts, offering loads of head and legroom thanks to a flat floor, but it still presents a challenge to provide enough space to three adults.
The base version of the 2016 Toyota Prius C has a one-piece rear bench, meaning it folds together and can’t be separated. C Two and higher trims have a 60/40 split possibility. There is 17.1 cubic feet of cargo room behind the second row of seats and although it isn’t huge, it’s comparable to other vehicles in the small car segment. 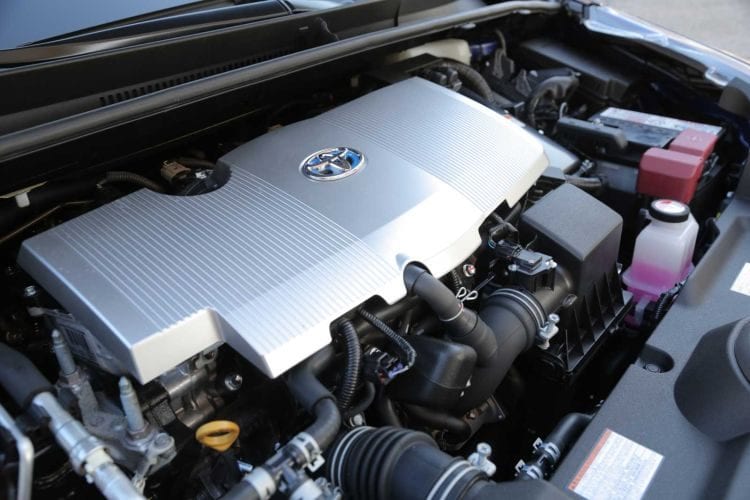 When it comes to power, don’t expect a lot. 2016 Toyota Prius C has a hybrid drivetrain, and the main goal of it is to offer lowest possible fuel consumption. The gasoline engine is a 1.5-liter four cylinder, and a nickel-metal battery pack powers the smaller electric motor. Both of them together offer up to 99 horsepower and the system is mated to a CVT transmission. Power from the CVT is naturally sent to the front wheels as with most small cars.
The 0 to 60 miles per hour sprint took 11.3 seconds. This isn’t just slow for its segment, but slow full stop. No one we asked seemed to care however, and they’re right, the car’s goal isn’t that. Its goal of fuel efficiency is more than met with a fuel consumption of 50 miles per gallon on a combined run. It trades blow for blow with most cars. It may not have that much power but with an mpg figure like that one, it’s instantly one of the most economical hybrids currently available.

Because it’s light in an effort to save fuel, it’s pretty agile too. You may think we’re kidding, but we’re honestly not. Okay, so it isn’t a Lotus, but for a small car, especially one that has a certain negative stigma around it from enthusiast it’s really not bad. It’s easy to park and turns on a dime. It’s nowhere near to the hot hatchback territory but it’s decent at the very least.

Beside Prius C One, you have four more C trims going all the way to the Prius C Four each adding something more than the previous one. The basic 2016 Toyota Prius C will cost you just $19,500, making it an excellent value for money. Second in the lineup is the model Two with a price tag of $20,360 and up the range, we have Special Edition, Three and Four trims. These are priced at $21,355, $21,785 and $24,495 respectively.