The Australian market gets a new SUV from Toyota that will be called the Fortuner, and it’s based on the newest version of the incredible Hilux pickup. The 2016 Toyota Fortuner is a large SUV with a body on frame configuration and seating for seven. It’s powered by the same Hilux based turbodiesel engine with a part-time all-wheel drive system as standard and an electronically locking rear diff.

The executive director of Toyota Australia, Tony Cramb, said the Fortuner is a direct alternative to the Kluger, Australia’s Highlander. This vehicle a lot more durable and capable than the unibody Kluger but it still slots just behind the Land Cruiser Prado both regarding luxury and price. Although it may seem a bit confusing introducing a new model so similar to an already existing one by the same manufacturer, Toyota says that they’re not direct competitors. They may have the same off-roading capabilities, but that’s about it, they’re both meant to appeal to different target audiences. 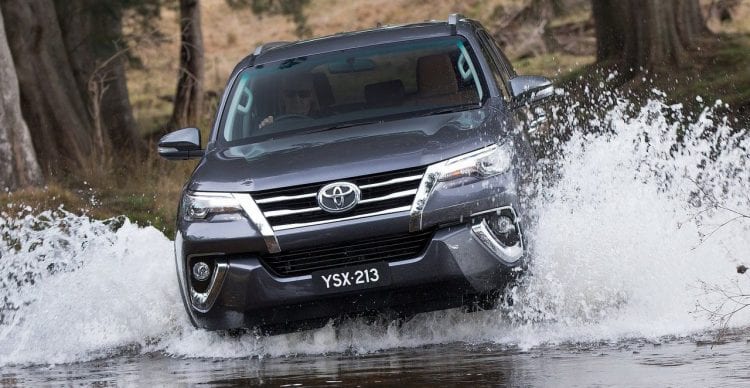 The Fortuner has a really interesting design. On one side it’s very modern and sharp looking, following Toyota’s current visual design language. On the other, it’s still very rugged and aggressive. You can instantly tell that this is a really capable vehicle just by looking at it. The short front overhang, the ground clearance at the tail and the high beltline are all indications that this SUV can tackle almost any terrain.

The front is okay looking but nothing that special. It comes with a chromed angular grille and slim slanted headlights. Because of the height and size of the car, the front seems short, a good thing in such a large SUV. The rear end has very interesting taillights with chromed accents between them. The tailgate features more chrome wrapping that starts all the way from the side windows making one quite interesting line. 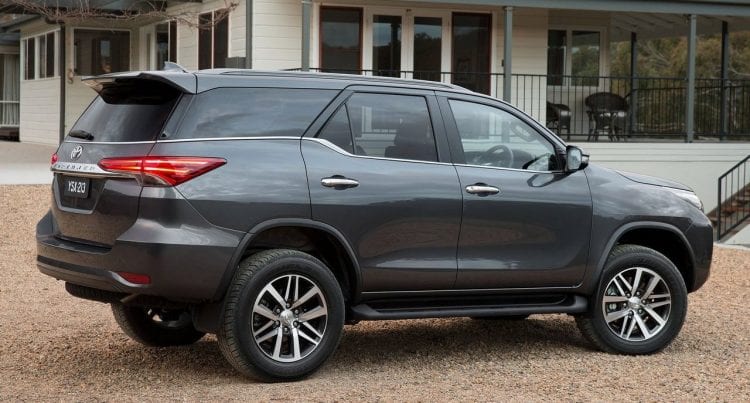 The side is classic for large SUV regarding appearance. The step bumper at the back gives you easier access to the roof, and it’s also a good way to get into the rear cargo area. The side steps also give you support for easier entrance to the interior; this is useful especially for kids. 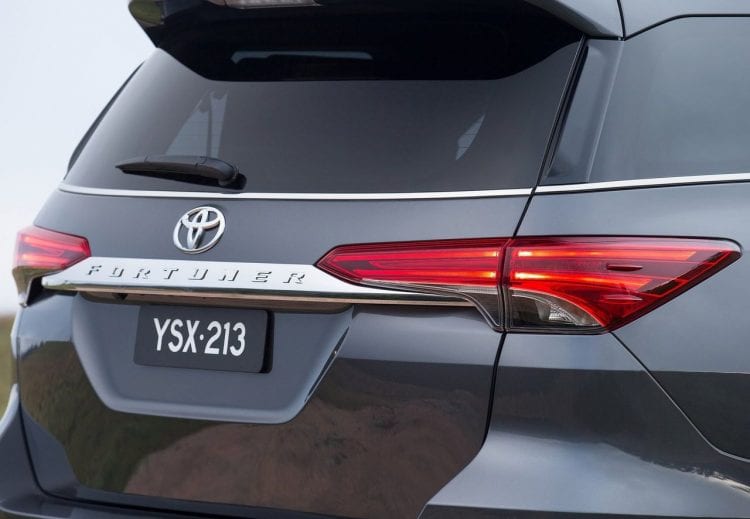 Based on what trim you get the Fortuner, you can have it with 17 or 18-inch alloys. The higher trims get a roof rack, fog lamps and parking sensors for reversing. A rear-view camera is standard on all trims including the GX, GLX, and the flagship Crusade; this comes very handily since we know that it can be very hard to park a vehicle of this size. The Crusade naturally comes with a few more hi-tech features such as the bi-LED headlights, LED daytime running lights, 18-inch wheels and a power operated rear hatch. Because this is Australia, Toyota will launch special accessories such as bull bars and similar which will, of course, be compatible with the Fortuner as well.

The cabin layout is very similar to that of the Hilux, but we all expected that. It’s very much an evolution of the Hilux interior although we do have to say it is a step up material wise. We’re not saying the Hilux brings bad materials; it’s just that they correspond to its price, and obviously Fortuner is in a different league. This makes it about average, but fit and finish are still great as expected. The Fortuner, on the other hand, is somewhere between the Hilux and the Land Cruiser. It’s a perfect mix of affordability and luxury. Every trim has front and rear air conditioning, hill-start control, seven airbags and an emergency stop light. 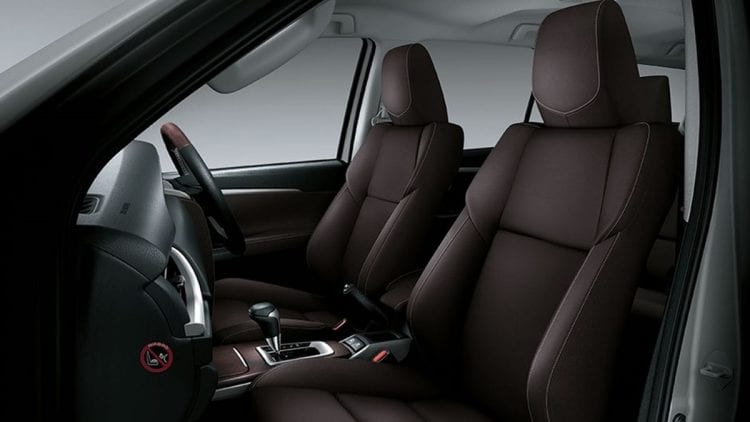 There’s also a version with an air-conditioned cooler box for anyone who wants to go on longer adventures and maybe wants to keep their food or drinks cool. The seating is arranged in the standard configuration for seven seater vehicles. You get a 2/3/2 format with the addition of a flat floor when you fold the second and third row of seats. The second row has a 60/40 split, and available cargo room goes significantly up when you do this.

The engine (notice how it’s singular) is a 2.8-liter 1GD four-cylinder diesel with a turbocharger. It’s singular because it’s the only engine for the Fortuner. There are no other optional petrol units or even diesel. Toyota thinks it’s the best, ideal engine for the Fortuner, so they didn’t bother offering it with another one. Not just that, but even if they did more than 90 percent of the sales would be with this engine, making the development of chassis able to take other units not a viable choice for Toyota. 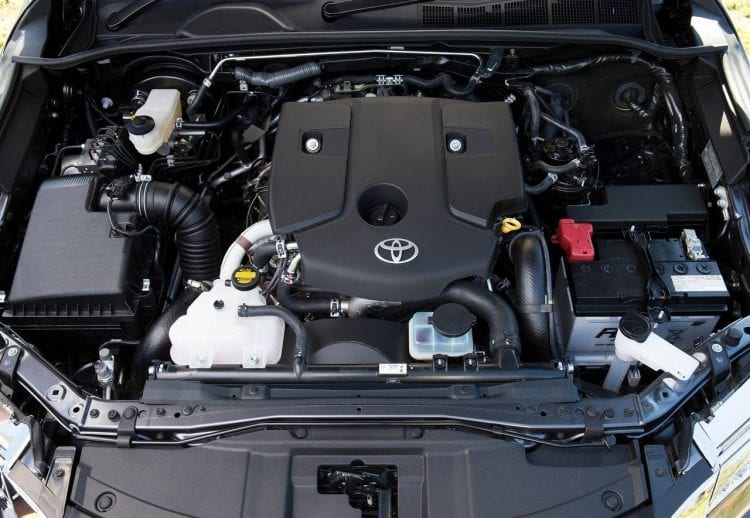 The manual gearbox too is a carryover from the Hilux meaning it has rev-matching for downshifts, something that not a lot of users of this type of a vehicle will even know or care about. Still, it’s a good feature to have even for daily driving, especially in such a large vehicle. It smooths the entire driving experience with no judder at all when downshifting. There’s no need to manually heel and toe or blip the throttle, just downshift and the electronics will perfectly match the gearbox’s speed with the engine’s, resulting in the best gear change possible.

There’s also an automatic gearbox, but Toyota actually expects the distribution between manual and automatic here to be around the same, unlike the U.S. where automatics account for 95% of all purchases. Behind both transmissions lays a two-speed transfer box. The part-time system gives you the choice of a standard RWD Fortuner, 4WD high range, 4WD low range and a neutral position. Downhill descent is standard on GLX and Crusade making these machines pretty much perfect for any terrain and situation.

It should start at around $45,000 although it’s not for certain. We are still waiting for confirmation on this, but when we take a look at the situation on the market, we can predict it will be in similar range. Stay tuned for any new updates on the Fortuner as well as almost all car related news.