If you’re the type of guy, who likes smart cars and cabriolets, prepare to have your mind blown. The newest 2016 Smart ForTwo Cabrio is quite possibly the single-handedly best small car ever.
The first ForTwo Cabrio was first introduced way back in 1999, at the Frankfurt Motor Show. It wasn’t just a big thing (although it’s one of the smallest), it was a saving grace for the brand. Well, the 2016 Smart ForTwo carries on the same philosophy the first car was built upon, but interprets it in its own way, moving the Smart brand further into today’s small car crazy world. 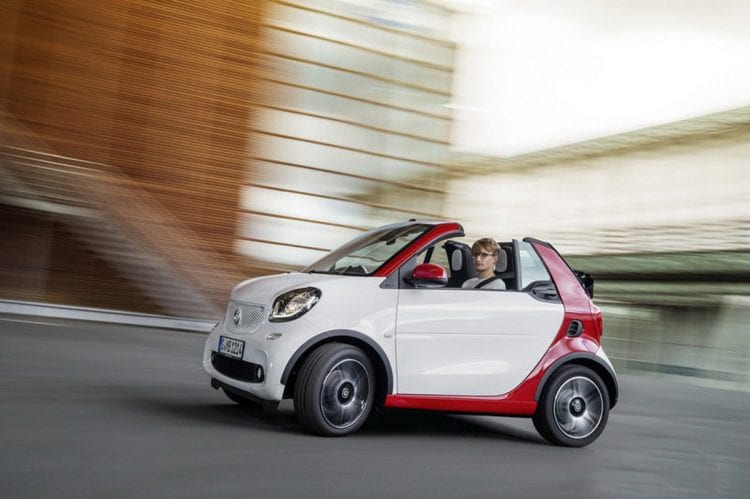 A quick note before we dig deeper into the details. This isn’t an all-new car like the complete redesign which was presented in 2014, but it is based on that very same vehicle so you could say it’s a relatively new chassis. The guys over at Smart expect it to replace some of the 220,000 cabriolets already roaming the world, but mostly to introduce newer customers to the brand who may have not even thought about owning a Smart car before this model.

This is a good-looking car, and we can’t stress that enough. While most small square cars like the iQ have been criticized for looking like a washing machine on wheels, we can assure you this one does not encounter the same problem. It’s basically a Smart ForTwo with a sliding roof, giving spawn to the Cabrio name. It’s still a Smart car, but since it’s longer, wider and freshened up it seems like an altogether more grown-up car and something that is much more useful than what we had with previous models. 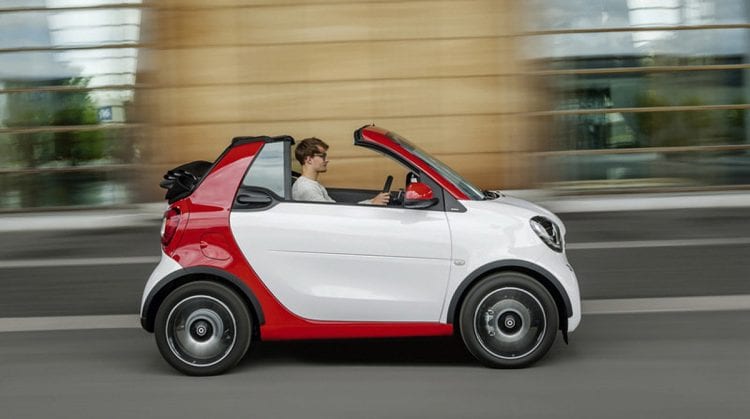 Take the front fascia for instance. Just because it’s not a completely new version doesn’t mean it shouldn’t receive some new features and upgrades. The front grille is larger and located higher in correlation to the hood; the headlights have been overhauled to have a rhombic shape, and the dual taillights as seen on the last model are now gone and in their place, we have a new square taillights.

To give you more space and visibility, the B-pillars have been slimmed down a bit. The roof is naturally retractable and features three built-in positions. It can be fully closed for rainy days, for instance, partially opened like a sunroof or fully slid all the way to the back for maximum open-top thrills. It’s a soft top, but the cloth is more resilient than ever. The entire opening or closing operation takes just 12 seconds, but that doesn’t include the time required to remove the cross beams and to get them in the trunk. 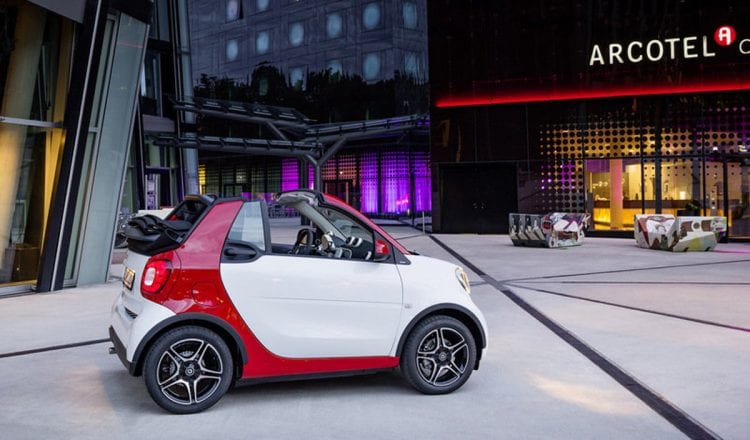 As far as color palettes are concerned, this Smart has you pretty much covered. It may be a small car, but it’s got a large variety of customizable options you can choose from including a two-tone finish. There are multiple designs for the wheels available, and even the roof can be painted in denim, red or black. Yes, the roof!

The interior of the smart is pretty much the same as the coupes. The same sculptural approach for the dashboard has been carried over, and even the door panels feature same elements. The front panel comes with a two-tone combo which is a really nice and welcome touch since it matches quite well with the exterior. The center console is larger, but it doesn’t make the cabin space seem smaller in any way when compared to previous iterations. 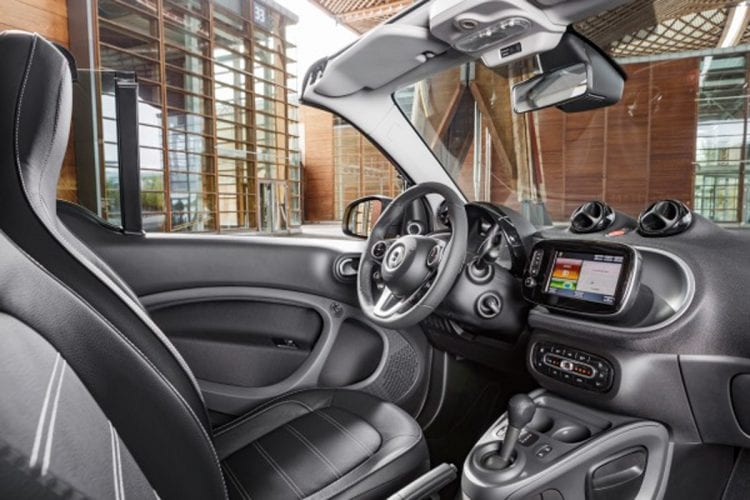 The entire instrument cluster is now revised to offer more ergonomics, keeping in tune with the better and easier to use buttons which occupy the center console. On the whole, it’s a nice and comfortable place to spend time in, and you will not get the feel you are in such a small vehicle. The controls are intuitive, and you’ll get used to them even after a few quick rides.

On the infotainment side of things, there’s a new infotainment screen showing all of the available gadgets on board and the wheel can be equipped with controls for the navigation and radio. Although it may seem like it will crowd the already small wheel, we tested it out, and it does work since the buttons are neatly housed in a round shape for your convenience.

The materials are extremely nice although you can find a few cheaper plastics bits and pieces here and there. The textile covered surfaces around the cabin can be ordered in lots of colors, so there’s that as a plus. We really love the seats which proved to be comfortable and supportive, and the fact that the roof can be taken off means there are no headroom issues even for taller passengers. The roof can be removed while driving or even when using the remote control from the outside. 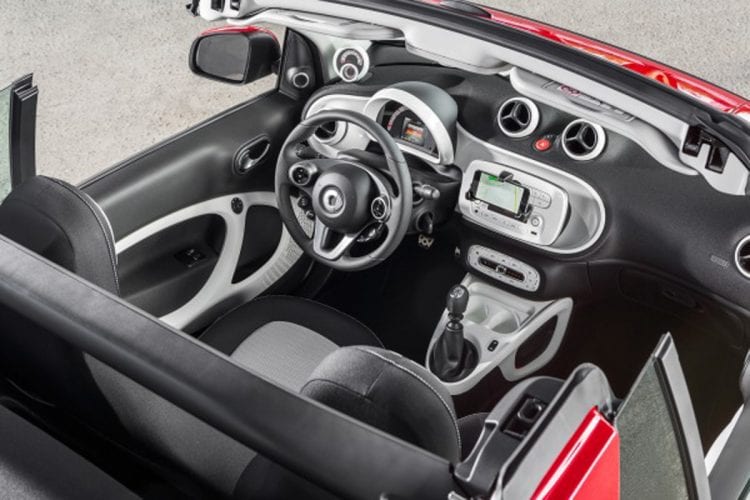 There are three engines to choose from. The first one is a 1.0-liter three-cylinder developing 71 hp and 67 lb-t of torque. Performance isn’t brilliant we admit. The sprint from 0 to 60 miles per hour took 14.9 seconds, and it will top out at 94 mph, six short of the 100 mark.

The more powerful 0.9-liter three-cylinder is turbocharged and kicks out 90 hp and 99 lb-ft of torque. This greatly improves performance. In fact’ it’s nearly a 50% increase regarding acceleration. The 0-60 mph time drops to 10.8 seconds, but the top speed remains the same at the almost same level, 96 mph.
Front-wheel drive is the only drive available, but there are multiple transmissions to choose from. The starting one is a five-speed manual, but there is a dual-clutch automatic in the list of options. Both are newly developed and upgraded. The manual is a debut, but the DCT replaces the ancient five-speed semi-auto in the older ForTwo. 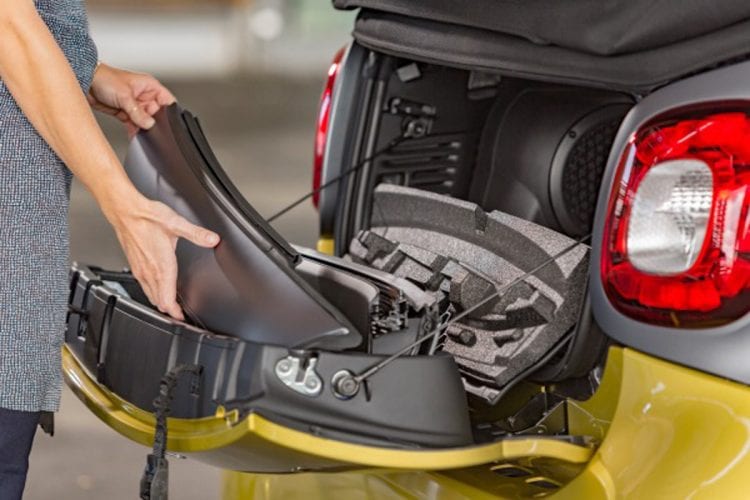 Both engine versions return the same mpg number as the coupe at 36 mpg on the combined run. There is a third choice which is a replacement for the 0.8-liter diesel. It’s a variation of the 71 hp engine but it’s the basic one and only delivers 60 hp. We mentioned it last since we would avoid it.

Prices on this small piece of automotive brilliance aren’t fully in the known, but the base price is just $15,400. It may seem like a lot, but it really isn’t for such an interesting little vehicle. We need to stress that many drivers that are looking in the direction of this vehicle should consider few other mini models that are available, especially from European brands.