Renault started life off as a relatively small car manufacturer, only making smaller front-wheel drive vehicles in the beginning. In fact, that’s what they’re most known for even today. They make reliable, safe and practical cars for families and just by looking at the buyers we can notice that they are appreciated by younger people. Recently, they’ve been having a crack at just about everything. First, there was the Twizy, an electric take on a very small city vehicle. Next, there were the racing-bound Megan and Clio RS models which are as crazy as the name suggests. It turned out to be excellent despite it being Renault’s first effort in the segment. And last year we saw Renault having a go at the midsize pickup segment despite them not having a clue about it.

When we say they don’t have a clue we don’t mean they’re bad at it, we mean that the Alaskan Concept was the first attempt at a pickup truck from Renault. With it, they have tried to target the up-market scene and paved the way to an upcoming vehicle which should be a global one. It could have also been a result of a brand new pickup truck that has been announced from Mercedes-Benz and should come by the year 2020.

The reason we mentioned Mercedes here is that of their deal. An agreement that sees Nissan (joint partner with Renault for a very long time) and Mercedes-Benz attempting to build a global pickup truck by 2020. Mercedes made a rendering of the truck which resembles the Alaskan, and that fact made lots of people question whether the 2016 Renault Alaskan Concept might be a preview of the real-life production pickup truck. We’re just speculating here of course, but we wouldn’t be surprised if it does turn out to be true.

Regardless of whether Mercedes has something to do with this or not, the Renault Alaskan Concept shows off the full potential of the brand, especially as it’s a large luxury pickup truck. Renault is quick to point out that the concept’s main goal is to be a business workhorse as well as a daily driver. This means that it takes a very large direction swing from most of Renault’s commercial vehicles which are very utilitarian.

It is just a concept, and we shouldn’t expect anything too much or serious regarding it, says Renault, but it is a direct glimpse into the future of the company and their truck adventures they will be embarking upon. It’s destined to hit almost every market in the world apart from North America (unless the U.S. gets it as a Mercedes version of course). 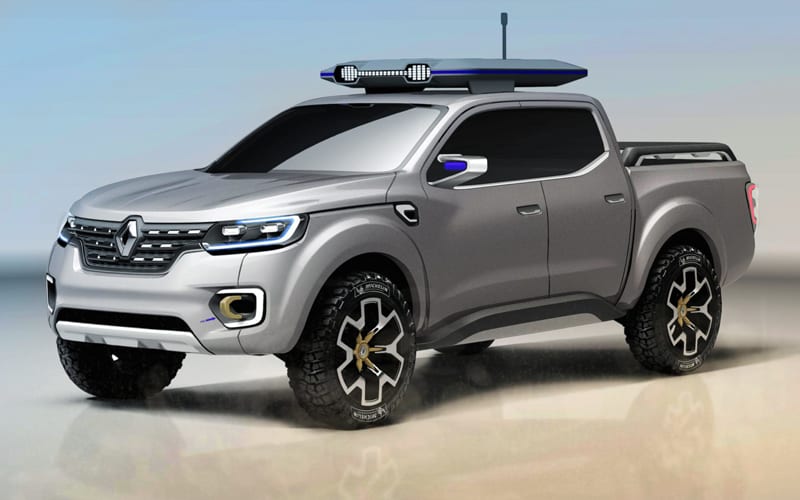 The design of the Alaskan Concept is striking, to say the least. There are sharp angles and soft curves mixed throughout the entire body, something, I believe, we’re never going to see on a production car. None the less that’s what makes it so exciting, getting to see something that we know will never see the light of day as a production vehicle. The front fascia has a very large Renault badge on the slotted grille, and to the very sides, we have LED headlights flanking each corner.

The bumper is visually separated by large tow hooks which stick out from the bumper, indicating that this truck is more than just for show, but it is indeed off-road capable. When it comes to ability, we’d expect a lot from it, provided it was an actual production pickup. The large 21-inch wheels look like they would offer a lot of traction thankfully to powerful tires, and it could easily get you out of the muddiest of terrains.

The back end has a composite bed with small compartments on the inner bed and the bulkhead. The railing system has been mounted on the top of the bed walls, and it’s a great tie-down spot as well as a visual element.

The automaker didn’t want to say anything about the device on the top of the Renault Alaskan Concept, but as far as we can work out, it’s a solar panel with off-road lights to the sides and the front. We can’t go over everything as there are so many details but you can look at the images and work out for yourself. Obviously, should there be a production model expect it to be a lot more toned down. 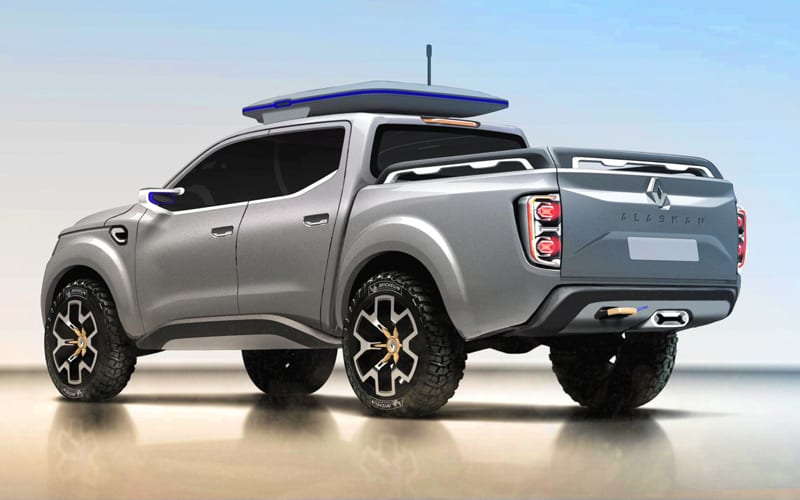 There are no specific details regarding the interior as of yet, but it’s safe to assume the 2016 Renault Alaskan Concept will have a luxurious cabin. Because the truck isn’t supposed to be a base, entry-level pickup truck we’re expecting great things from the production ready model. When we factor in the Mercedes rumors, it’s a no-brainer. If Mercedes does indeed have something to do with it, expect the interior to be equipped with all the latest technology features and to be out of this world.

Under the hood, we find the turbocharged 2.3-liter four-cylinder diesel. The unit is good for 188 horses and 331 lb-ft of torque thanks to two turbochargers. The first, smaller turbo generates boost low down in the rev range, creating a lot of torque and shove from very low RPMs. The bigger turbocharger is activated at higher RPMs, and its job is simple, deliver as much power and torque as possible. Because they’re sequential you don’t even have to worry about turbo lag, not that it matters in a car such as this, however.

The Renault Alaskan Concept comes with both a manual and an automatic gearbox (at least that is expected), and all-wheel drive should be the standard thing here. Whether a 2WD version is indeed standard or the 4WD system is part or full-time we’ll just have to wait and see for ourselves what type of drivetrain French car maker prepared.

Because it’s based on a Nissan NP300, it also rides on independent suspension at the front and a solid rear axle with a five-link coil spring design. We’re not fans of the solid rear axle because it’s very primitive and old style, but we can’t say we don’t understand why it’s still being used. 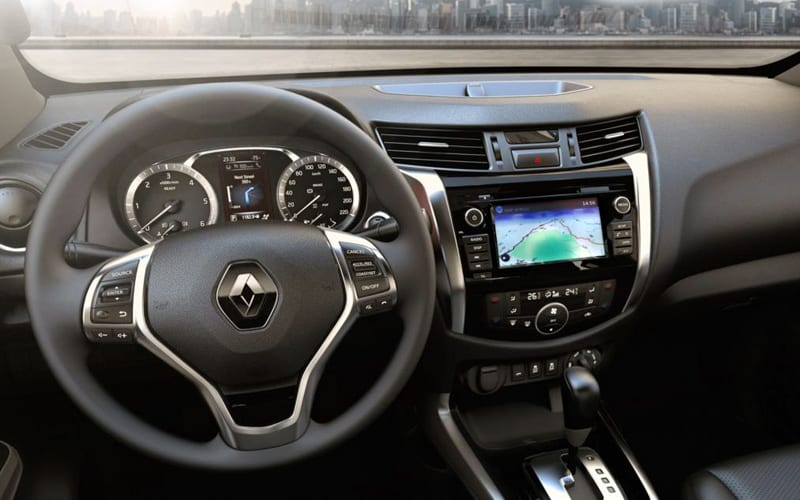 Prices are obviously a long far away especially as it’s a concept and can’t be bought, but we suspect you can find a shop to build one for you for an insane amount of money should you want one. Another thing that is not certain is the release date. Some speculations suggest this concept could become real life truck before 2020, but only time will tell if this is going to happen.