Home
Nissan
SUV
2016 Nissan Pathfinder – Made to Take You Further

The Pathfinder wasn’t always the vehicle it is today. Originally it started its life as a truck-based vehicle and had decent success in its right. The weak truck-based platform that was offered forced Nissan to move it to a much better and more profitable segment bringing along major changes. So, in 2013 they decided to base the Pathfinder on the Altima sedan’s underpinnings, effectively making it a much more car-like experience regarding driving and refinement. Although there were those who were disappointed to see it migrate to such a platform, the overall feedback from most users has been positive.

Apart from mechanical bits, 2013 saw the Pathfinder receive some significant styling changes which brought the outdated model in line with the newest ones from Nissan. It became a lot more handsome and was even able of going head-to-head with a lot of the competitors it previously couldn’t. The 2016 changes are minor and mostly come in the form of heated front seats and a heated steering wheel, but that’s not the point. The simple fact of the matter is still this: there are newer and much better SUVs than the unibody Pathfinder, but that’s on paper. As we know far too well, things never turn out in practice as they seem in theory. There is no better example than the Nissan Pathfinder that strongly proves all that.

The Pathfinder retains the same four trim levels for 2016: S, SV, SL, and Platinum. Kicking off things we have the S, the entry-level model. It’s got 18-inch alloys, a privacy glass for the rear, automatic tri-zone climate control, six-way height adjustable seat (just the driver’s seat), a 60/40 split for the rear row and a tilting and scoping steering wheel. As if that wasn’t enough it also comes with cruise control and a six-CD charger.

Moving to the second level, the SV, gets you automatic headlights, rear parking sensors, keyless entry, a leather steering wheel, a genuine front tow hook and even remote start. Besides obvious things like Bluetooth connectivity, there’s also a jack for USB connectivity, replacing the old auxiliary jack, and with good reason. Almost all modern devices use USB port for charging and connecting.

Go for the SL and you’re suddenly knocking on the door of high-end luxury. You get a blind-spot warning system with a rear cross-traffic alert, adjustable liftgate which is electronically operated, a chromed exterior (trims and accessories), heated steering wheel, leather upholstery and heated seats both for the front and the rear. We found this trim to be the ideal bang for your buck. It offers everything you’ll ever need at a price that’s not that much higher over the previous trims.

If that isn’t enough for you, then, by all means, go for the Platinum. It’s the top-end Pathfinder featuring an 8-inch display, towing preparation system, a 360-degree camera for easier parking, voice-controlled navigation system and a high-quality Bose audio system with 13 speakers. There are 20-inch alloys and a Family Entertainment package becomes standard, adding a rear entertainment system with dual displays embedded in the headrests of the front seats. Kids will have a distraction, and even longer journeys won’t be a problem.

The Pathfinder’s strong point (or should we say one of its strong points) has always been the interior. It’s just an attractive cabin with nothing but high-quality materials wrapped around every single element and gadget. All of the models are great, but the Platinum stands out. It offers everything and then some. It’s got arguably the best cabin of its segment or at least one of the best. 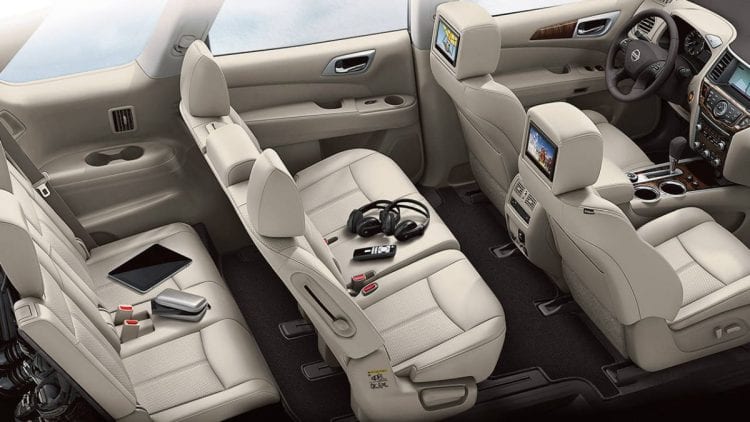 Elsewhere you’ll find the Pathfinder easy to operate. Not only that all of the buttons and gadgets ergonomically laid out, but they’re easy to understand and use. You will get the hang of it in no time. The 8-inch screen is large and responsive, making it user-friendly and understandable to virtually anyone. It’s not flashy or  Lincoln Navigator luxurious, but it does its job more than decently. What’s more, there are no clustered instruments or buttons, reducing confusion even when using the Pathfinder for the first few times. 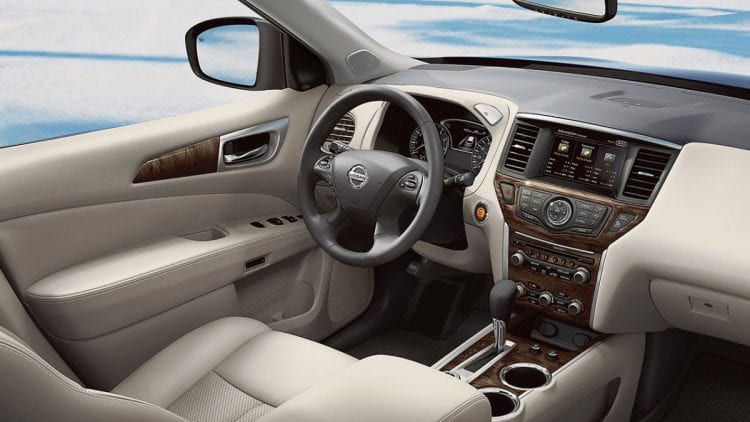 The front row seats are comfortable, but we kind of expected that. The rear row follows this trend also. They can slide, aft and recline for more comfort or greater space usability. If the third row of seats is not in use, you can push it far forward, a lot more than any other competitor will offer you. This means that instead of having to fold them down, you can just slide them up and use all that new trunk space you’ve just gained in few seconds. The third row is a bit clustered admittedly, but it’s mostly made for children so who cares that you can’t get an adult comfortable.

There’s just one engine option, and it is Nissan’s trusty 3.5-liter V6 that we’ve seen do great work in almost every other Nissan application. It outputs 260 hp and 240 lb-ft of torque. It’s mated to a CVT gearbox and can send its power to either the front wheels or all four of them if the Pathfinder is equipped with the all-wheel drive system. Speaking of the AWD system, this one’s got a hill-descent control system and a locking center diff, fixing the power distribution to a figure of 50/50 front to rear, or in other words perfect distribution. The Pathfinder has no trouble finding a path even in dirt and snow (excuse the pun). 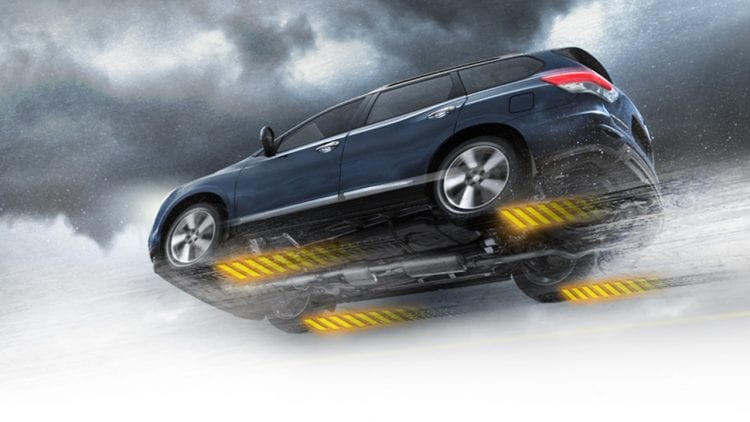 The 0 to 60 miles per hour sprint takes 8 seconds dead, making it around average for the class. It ties the Durango V6 but gets trumped by the new Honda Pilot’s impressive figure of 7.4 seconds. It does, however, return 23 miles per gallon on the combined run when only in front-wheel drive guise and 22 mpg when fitted with the all-wheel drive system. The worst is the AWD Platinum model which can only do 21 mpg, still an impressive result none the less. If you equip it with the towing package, it’ll happily pull up to 5,000 pounds that is enough for a smaller boat and similar.

Prices start at just $29,800 at which it’s quite honestly a steal. We have no idea how Nissan sells it for so low since it does offer great features and lots of standard equipment. Granted, the price does go up once you start stacking it, and it goes up rather dramatically, but even the basic model comes loaded and has the same high-quality materials. Nissan, we applaud you, and we recommend everyone that is looking for a vehicle in this segment to test Pathfinder also.