The Nissan Leaf was one of the original, affordable electric cars that we actually liked. And in that group, it was amongst the even rarer ones who managed to drive more than 10 miles without running out of juice or encountering any problems. We thoroughly liked the concept and the way it drove, but the magic of something new and innovative quickly faded leaving us with just an electric hatchback, something we’ll be seeing more of in the future.

So in an effort to spice it up again, Nissan have decided to introduce a few things for 2016. First of all the battery pack is now much bigger enabling a 27% increase in range in SV and SL trims. Systems have been upgraded for each of the three trims, and the base S model even got a bigger touchscreen. 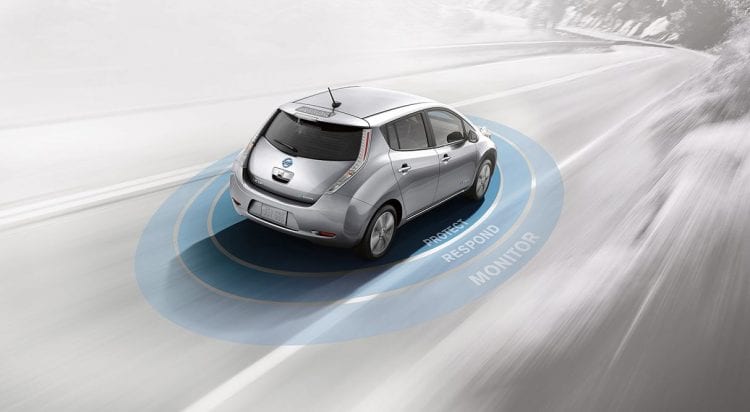 As of 2016, the Leaf is in its sixth year of production and closely approaching the seventh. It’s regarded as a pioneer in the automotive world, and whether you like it or not, most people still respect it. It’s one of the first mass-produced electric vehicles, but that’s not going to sell alone. Yes, it may have been first, but we know very well how soon other manufacturers tend to copy any niche model or something with a big profit potential. 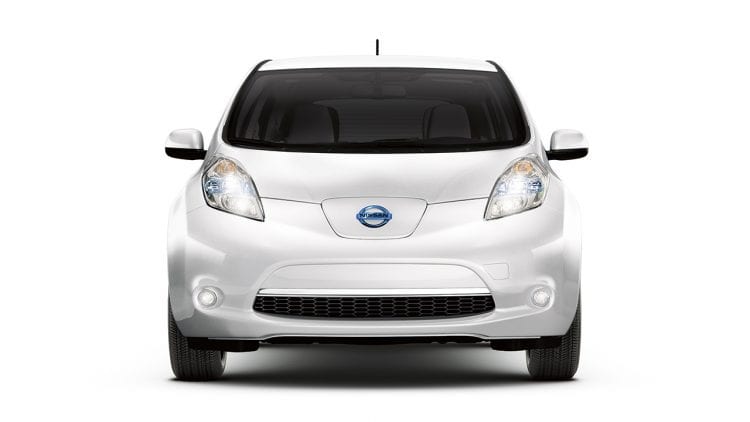 The Leaf has managed to go on for six years without any major upgrades despite other companies offering re-designs every two or three years. The fact that it’s still one of the top contenders, and remains at the top speaks in volume of how far ahead it was when it came out and in fact, how far ahead it’s even now.

We’re not going to comment the exterior too much since there’s almost nothing we can say that hasn’t already been said, but we’ll give it a few words. The front should be familiar to anyone by now with those bug-eye style headlights protruding from the front. There’s no standard grille per say, and the one that’s there is located at the bottom. The overall shape resembles the form of a bubble, but other than a few quirky details you wouldn’t think it’s anything more than a slightly weird looking hatchback, at least if you didn’t know what it is.

Because there isn’t a conventional engine, there’s lot more room and so the designers have been let loose when it comes to the inside of the cabin. The battery pack has been safely stored inside the floor underneath the carpets and seats, offering ample of room for every passenger. It may appear small, but it will surprise you to know that even taller people can sit comfortably in it. Headroom is not an issue, but the high driving position could be especially since the steering wheel doesn’t offer a lot of adjustabilities. Unless you’re ridiculously tall, this shouldn’t be a major drawback. 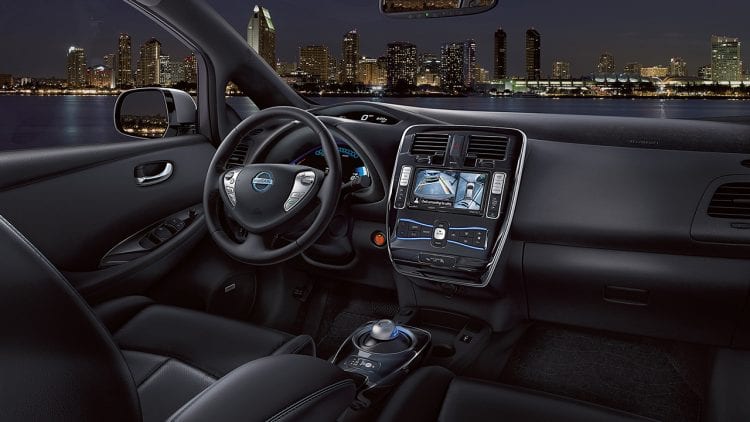 The trend of massive space follows the trunk too. There are 24 cubic feet of space behind the second row of seats. They do fold flat giving way to additional 30 cubic feet of area. And the best thing? Even the SL and SV’s bigger batteries don’t take up any of that room since they can slot directly into the same slot for the batteries in the standard S version. 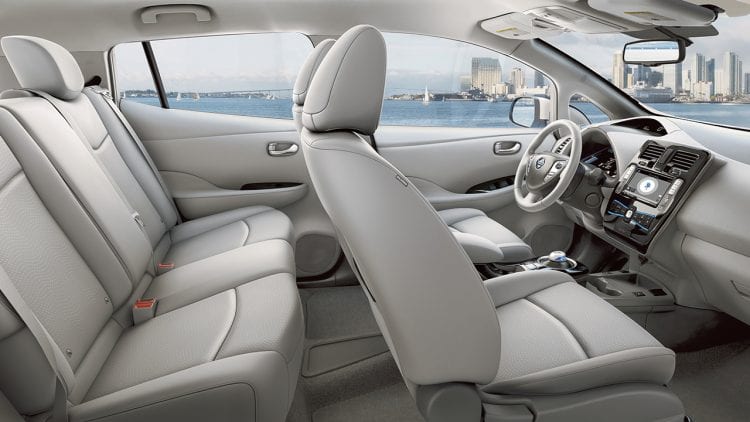 The design of the cabin is excellent, but it’s rather let down by the materials used. They’re okay but at this price, you’re really expecting a lot more especially from a company such as Nissan. These are not the worst of materials but are harsh and have the all too familiar plasticky feel. It would certainly benefit from some smooth, soft plastic pieces. The i3 and e-Golf’s interiors are much better, and this was noted by most reviewers and experts.

You won’t find a diesel or gasoline engine here. The 2016 Nissan Leaf has an electric motor, an 80-kilowatt electric motor to be exact. In conventional measurements, it produces 107 hp ad 187 lb-ft of torque. It provides that power by drawing electricity from the batteries which are made using latest lithium-ion technology. The basic S model has just 24 kWh to work with, but the more expensive SV and SL get a much more generous 30 kWh. 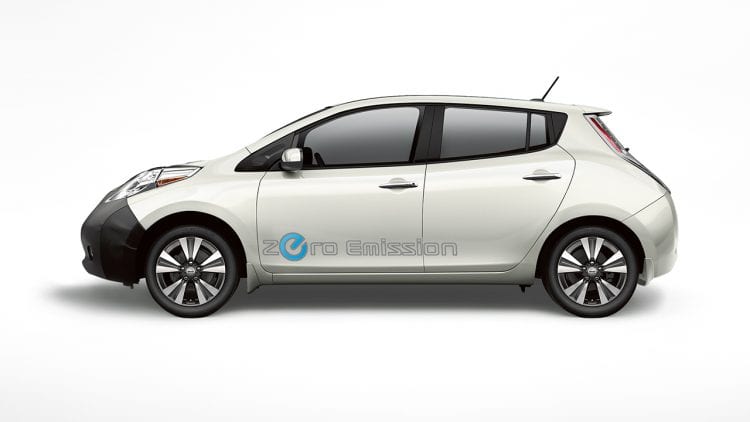 Power is naturally sent to the front wheels making it a front-wheel drive only without AWD option. Although electric vehicles are supposed to offer instant torque and insane acceleration, we’re sorry to say the Leaf isn’t one of them. Well, it’s not in the class of the Tesla anyway. It completed the sprint from 0 to 60 miles per hour in 10.2 seconds. Slow, but still faster than a Prius. We think that this is a decent result but further down the road we hope that one of the future models will improve this.

The basic S model with the 24 kWh can cover 84 miles before it needs to be recharged but the bigger 30 kWh pack is good for 107 miles. The numbers remained the same in real world testing, but the car was driven in normal conditions. Expect those numbers to go down drastically if you constantly push the gas pedal, and you are not careful while driving. 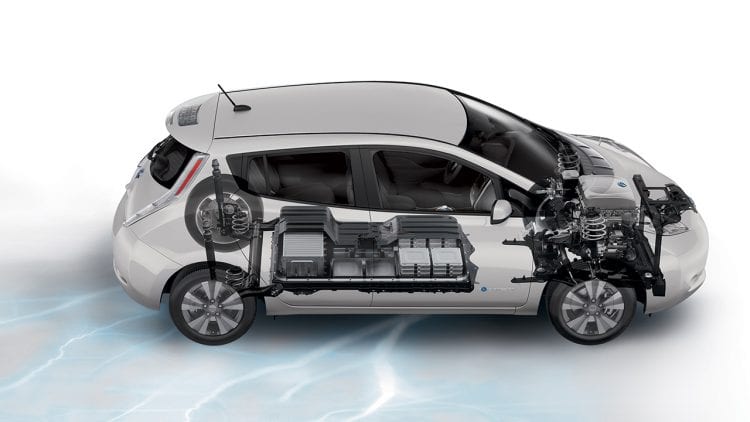 If you attach it to a 240-volt source, expect the 30 kWh pack to charge in around five hours if it was fully depleted providing you have a 6.6 kW charger. The 24 kWh pack charges with a 3.3 kW charger, so it’s a much slower option, taking up almost 8 hours to fully recharge. One really cool thing is the high-power charge station. A quick-charge port is standard with the SL and SV, and it can charge 80 percent of the Leaf’s battery in just 30 minutes. Short stop to stretch your legs, coffee, eat something, and you are ready to go further.

Because it’s electric vehicle, expect no engine noise from the inside. That does give one problem, however, and that’s road and wind noise. The lack of engine noise exaggerates these sounds, especially when cruising on the highway. In reality, however, it’s well isolated, and you’ll get used to it in no time. 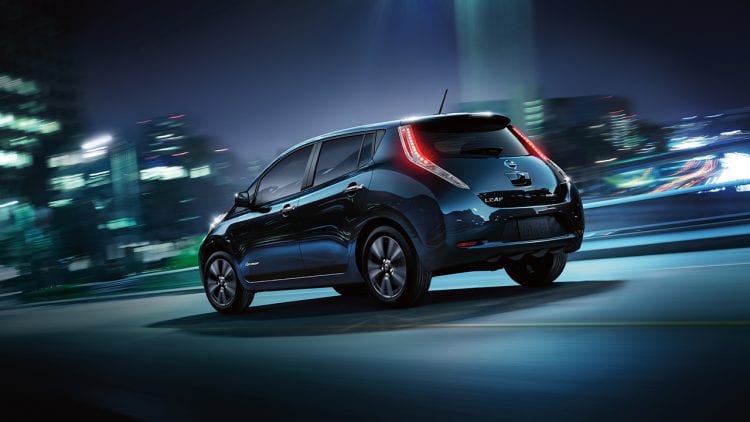 There you have it in a nutshell. The 2016 Nissan Leaf may not be changed too much but thanks to its excellent characteristics that made it a great proposition year ago, it still is. Our only real complaints are the materials inside, but you can live with them. Prices start at $29,000 for the base S and reach $36,790 for an SL trim.