If there’s one segment where competition is fiercer than ever, it’s the small compact one, which is crowded with many great vehicles. Sure, the SUV segment is pretty packed too, and it’s definitely more popular, but the fact that it’s split up into so many different sectors means it’s nicely spread out into smaller niches.

It’s not that easy to satisfy the average compact customer simply because of the high demands. Everyone wants a fast car that’s practical, safe, reliable, easy to drive and inexpensive. We all know, if you’re going to make the vehicle more affordable you will have to sacrifice a thing or two here and there, usually in the performance department or the interior materials. There’s nothing which can ruin a car’s sales more than a major deficit in one of the areas, and it’s something we’ve seen it all too often lately.

Thankfully, that isn’t the case with Mazda’s Mazda 3. This may seem like a marketing hype, but the small little compact does provide great styling with incredible driving dynamics for what it is while managing to slot itself neatly amongst the current cars on offer regarding the price.
The 2016 Mazda 3 was first launched in 2003 when it replaced the Protégé, the horrid car a lot of people dreaded. New model received an update in the form of a second-generation just five years later. This is currently the third-generation, and Mazda seems to be on the roll as the 3 is still one of the best compacts available on any market. It is Mazda’s biggest grosser in terms of how many are sold, so let’s delve deeper into why the 3 is such a big success.

For starters, there’s the looks which is just amazing, something that immediately gives it more than what competitors offer. The small compact is, of course, offered in a four-door sedan version as well as a five-door hatchback one. The standard car, good looking as it is, doesn’t get a lot regarding equipment. You get steel 16-inch wheels, power-folding mirrors and the standard array of colors, not much to brag about really but more than enough for the base version. Thankfully, you soon realize the options list is as long as they come, with a staggering amount of choices to enhance your 3.
Things like much bigger, and nicer 18-inch alloy wheels, adaptive HID headlights, lots of technology features for the interior and so on are on the list of features you can opt for. If you don’t like the looks or can wait a year, Mazda announced a new restyled exterior for the 2017 version which might be even better. For now, this is it, and we don’t see why anyone would have a problem with it.

It follows Mazda’s current design vision, the “Kodo – Soult of Motion” language design. We first saw the Kodo language on some prototypes, but the first official vehicles to feature it were the Mazda 6 and the CX-5, back in 2010 at the Paris Motor Show. Starting 2014 and the third-generation of the 3, the small compact received the significant Kodo update too, and we can see similarities in design with bigger models in the family.
All in all, we have to say we really enjoy the looks of the Mazda 3. It’s a handsome looking beast with its flowing, elegant lines and sports features. In a rather dull and uninspiring crowd, the 3 could very well be the best-looking vehicle. Overall, we give it very positive score in this category.

Inside, it’s more or less the same deal as the previous year model, but there have been a few updates. Most notably, there’s a rear view backup camera as the standard for the entire range of the 3, and it is clear that a lot of premium features find their way onto the Mazda 3 model as options (radar adaptive cruise control, etc.).
Besides that, you’ll find the standard array of gadgets and good quality materials. The windows are power operated, with just one touch/push to go up or down. The AC even has a pollen air filter, not something you’ll find on a lot of the competitors. The steering is adjustable in all directions, with settings that allow anyone to find comfortable driving position.
The instrument cluster is one of our favorite things. The biggest thing in it is the tachometer gauge, slapped right in the middle as it should be. On either side, you can find complementary screens with other information’s such as speed and car vitals, and there’s even a heads-up display telling you the most necessary information. 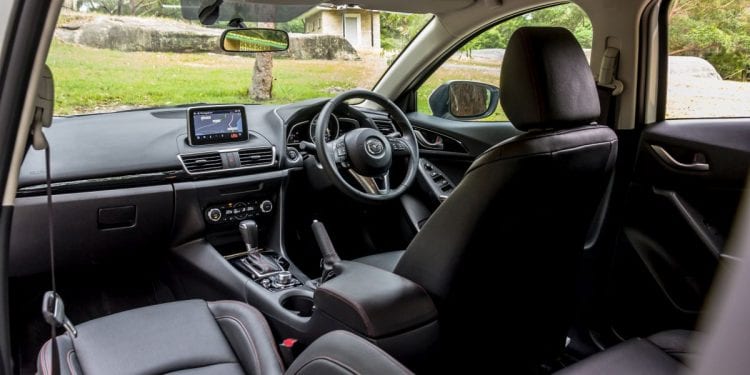 As for engines, there are two options, both of which are Sky-Activ carryovers from last year car. The standard car gets the 2.0-liter four cylinders developing 155 hp in “i” guise while the much more powerful “s” model gets a slightly larger 2.5-liter four-cylinder with 184 hp. Both of these can be had with the standard six-speed manual or a six-speed auto if you desire to specify yours with it, at an extra price of course.

A bit more power is always great, and a 30 hp difference isn’t exactly negligible, but the main reason we prefer the larger 2.5-liter is the added mid and low-range torque it offers over its smaller brother. The 2.0 unit delivers 150 lb-ft of torque at a very high 4,400 rpm while the 2.5 one provides 185 lb-ft of torque but at 3,250 rpm. Both are good, but we’d go for the 2.5 if given the choice.

No matter which one you choose, you can be sure that small vehicle like 2016 Mazda 3 will have decent performances and very good fuel economy. The 2.0-liter equipped models to return 33 miles per gallon on the combined run while the 2.5 option can only manage 29 mpg, still a great feat. Those figures aren’t suggestive of the fact that the smaller engine gets 41 mpg on the highway, making it one of the class leaders. 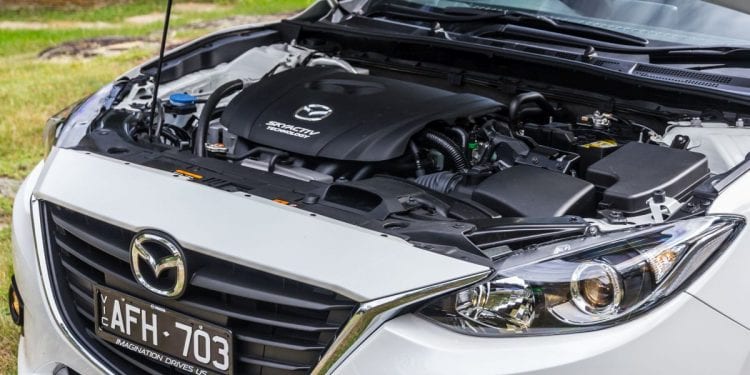 Power isn’t everything with the 3 however. It has that well known Mazda handling. It’s light and nimble on its feet, and can even bring cars with a lot more power than itself down on their knees. If you’re a keen driver and want a small compact, this is the definitive car to have. We wouldn’t even look at other options; the Mazda 3 delivers everything you’d want from such a car in one competitively priced package, starting at just $17,800 and you can’t beat that.