Lotus is at an interesting point at the moment. It’s facing heavy financial problems and needs to cut down on a lot of stuff just to stay in business, but it also needs to update their vehicles to keep more people interested in the brand. If both of these things sound like they counter each other, it’s because they do. Obviously, Lotus can’t introduce a brand new model to the range, so the next best thing is to upgrade an already existing vehicle and unveil a brand new edition that will be added to the lineup. That is exactly what they did with the Evora 400.

In all honesty, the main reason to deliver the Evora 400 was a silly issue. An issue with the noncompliant airbags for the U.S. market, which saw Lotus stopping the sales of the Evora in the states. Obviously, losing that large segment of a market is not something they’re prepared to do, so they came up with the solution to make this car in order with US laws. As a result, we are getting 2016 Evora 400 and rather than just fixing that problem, they decided to give it more power and slightly improved it in multiple areas. This Lotus is now ready to take the battle to the 4C and even the Cayman GT4. We suspect the biggest struggle for the Evora won’t be beating Porsche or Alfa, but rather getting the recognition and chance to do so. 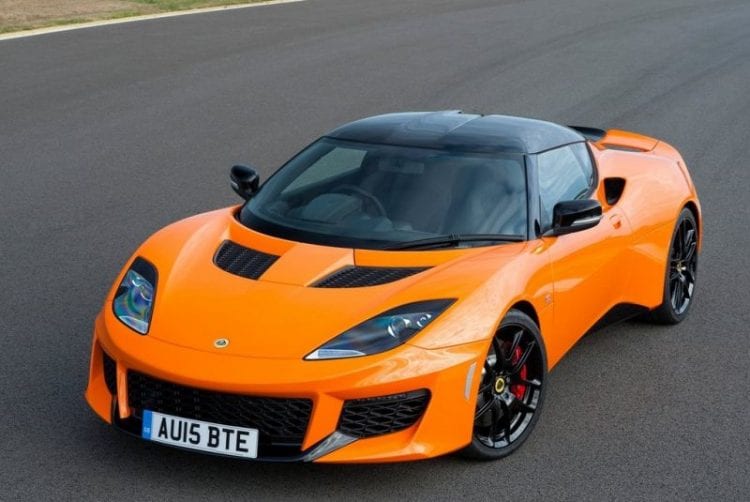 Let’s start with the styling. Okay so it’s not the flamboyant Italian the Alfa 4C is, but neither is it as dull as the Cayman. Yes, the GT4 has the added flare over the standard Cayman and is instantly recognizable as such, but just look at the new Evora 400. It’s got a menacing and aggressive appearance that the GT4 with its sophisticated look just can’t match. The front fascia has been largely changed (not that it needed any updates) and is now much eviler looking. If this rocks up behind you, you’ll move out of its way, unless you are sitting behind the wheel of a true beast. 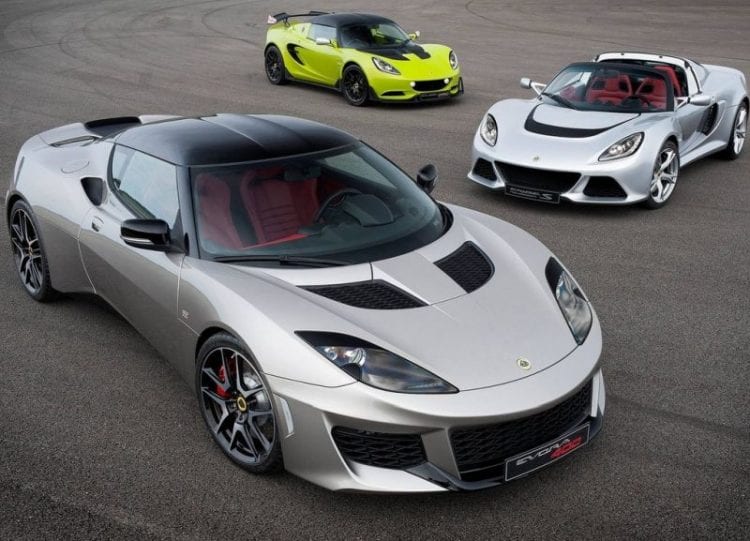 The front end genuinely looks like it belongs on a sports car such as the Evora, and the front splitter, the large aggressive vents and all of the LED lighting make it up-to-date and a part of the new age of sports cars. The side is the only mostly unchanged segment of the Evora, maintaining the same waistline, roofline and aggressive lines at the bottom of the door, curving inside. It’s a well thought out profile look, and we can’t argue that it is one quite likable car.

Round the back, we find pretty substantial changes just like in the front. For starters, the taillights have been embedded much deeper into the back fascia, and the spoiler is now more distinctly pronounced. The rear diffuser is a lot more aggressive, and it has been beautifully integrated into the bumper. The entire back fascia appearance is that of a much wider vehicle. There’s 0.33 Cd of drag resistance and Lotus says it produces genuine downforce. According to them, it makes 32 kg at 150 miles per hour which is very impressive. There are new lighter wheels for 2016, and brand-new side mirrors make an appearance too. 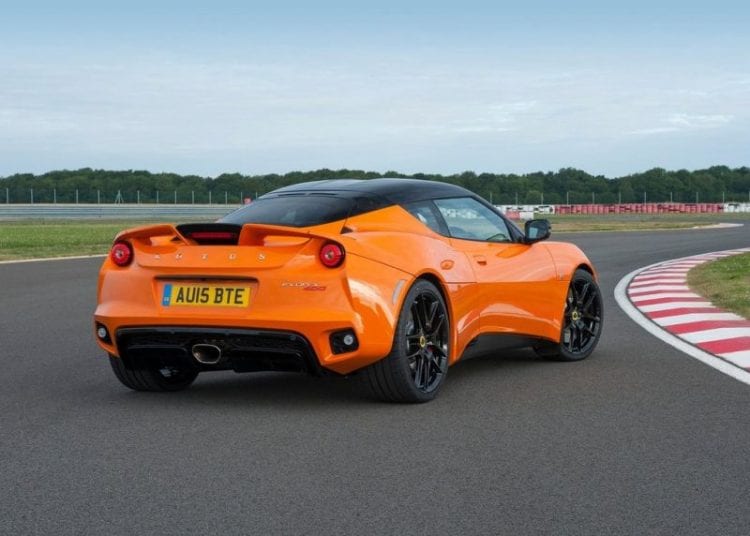 The inside sees some noticeable upgrades too but not as much as the exterior. The door sills have been narrowed by 43mm, and they’re 56 mm lower. The door panels take the same approach as well. Once inside the cabin, you’re greeted by new front seats which are lighter by 3 kg. There’s a new lightweight steering wheel made up of magnesium, wrapped in leather. It’s not just the steering wheel too. The whole cabin is covered with high-grade materials such as Alcantara and Scottish leather. As you go up the trim levels the level of luxury increases of course but all that has a high price. 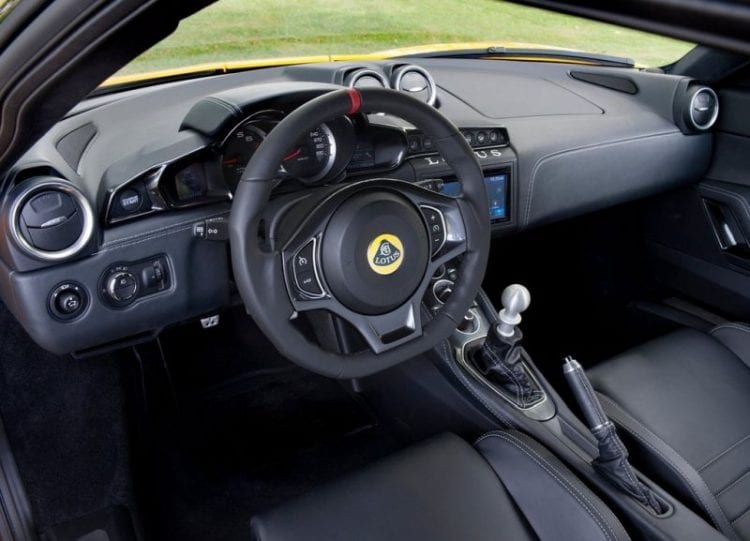 The driver is greeted by a set of revised gauges which work even better now. The black backboard is nicely contrasted by the white numbers, meaning reading them even at speed is very easy. The buttons for the automatic transmission have now been moved higher up the dashboard for easier access. A lot more attention has been devoted to ergonomics, and you will notice this if you compare this version and other models in the lineup. Contrary to popular belief you can opt for rear seats which will sit 280 mm lower and will weight 3.4 kg less. If you’re especially tech savvy, opt for the high-end entertainment system. High-end being a relative term here since it only adds lightweight door speakers and A-pillar tweeters. 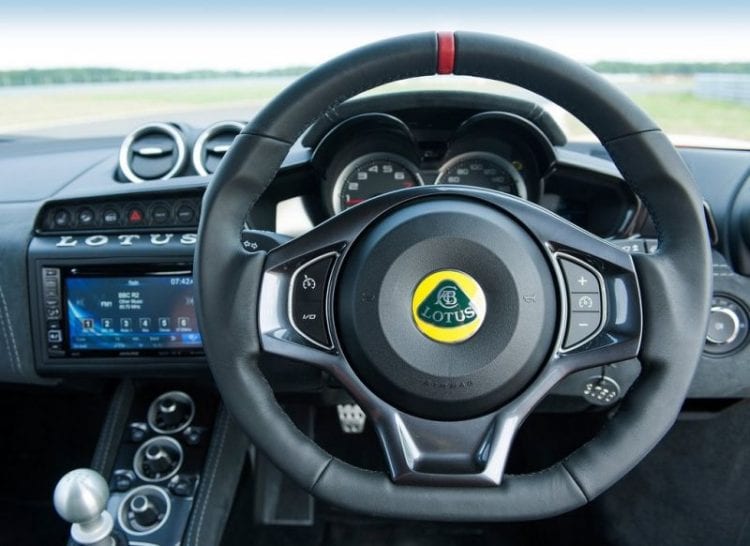 Under the hood (better say behind the driver since it’s mid-engined) we find the same 3.5-liter Toyota-sourced supercharged V6, tuned here to develop, as the name suggests, 400 hp. It also pumps out 302 lb-ft of torque, representing an increase of 55 hp and seven lb-ft of torque compared to the standard Evora. The extra power results in a drop of 0.3 seconds in the sprint to 60 miles per hour which is now done in just 4.1 seconds. The top speed has gone up by 8 miles per hour and is now 186 mph.

The Evora 400 has three settings on its traction control system to assist you in any situation: Drive, Sport and of course, Race. The biggest noticeable difference between these is in the response and aggressiveness of the throttle input. You also get a switchable exhaust system which allows you to move seamlessly from a peaceful and dignified tune to a loud and gnarly V6 snort. If you’re anything like us, you’ll mostly leave it at the loudest setting but have in mind this might annoy your neighbors. 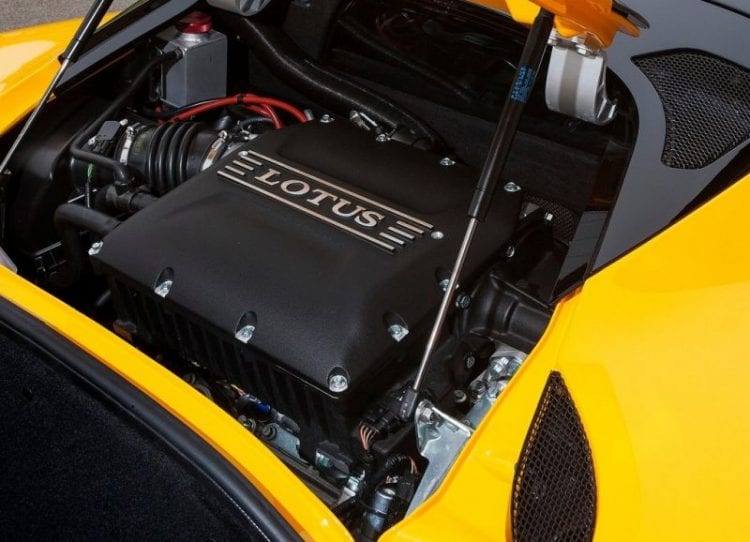 The way the 2016 Evora 400 drives just boggles the mind completely. The best way to describe it is to say it goes around corners like it is on rails. It’s so much more capable than the 4C and nearly on par with the GT4. It may not be quite there when compared to the GT4, but regarding straight-line performance, it has it trumped. The fact that it will do massive slides is a pretty big bonus too. It may be missing a manual gearbox, something the GT4 offers, but it’s still brilliant and fun.